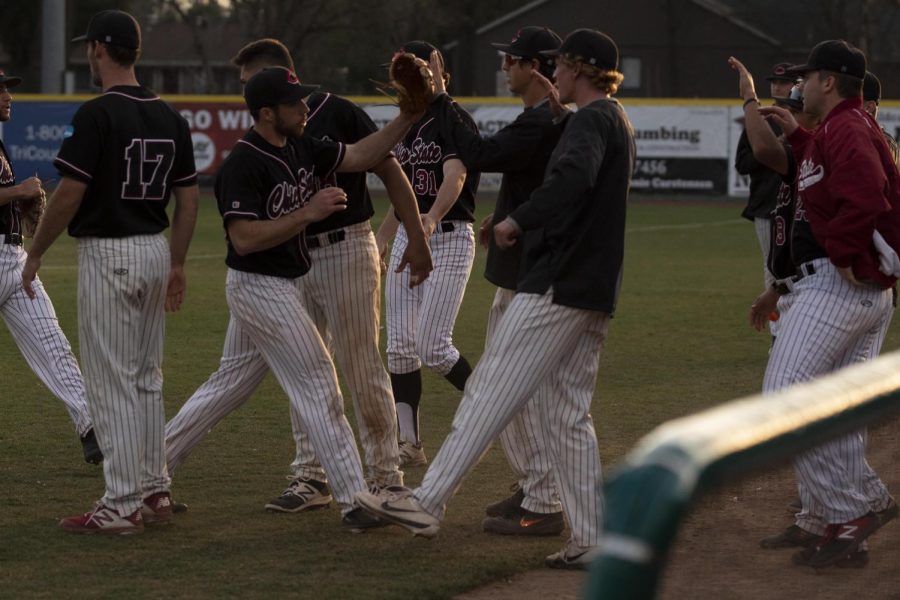 Daniel Foret praised by teammates after ending the inning.

With a 2-2 count, two outs and two men on, Adam Muñoz stepped up in the bottom of the seventh inning looking to put up the go-ahead runs. Muñoz did exactly that and drilled one to center field to add two clutch RBIs.

“We practice getting that runner home all the time in practice. I was just trying to keep the hands low, let the hands work and just do my job,” Muñoz said.

The Wildcats (7-3) would take a 6-4 lead after this and did not look back, winning three in the four-game series against the San Francisco Gators (7-3).

Austin McFarlane, a sophomore RHP, got the call on the mound in the final game and went only three innings allowing three early runs, six hits and two walks. Jackson Kritsch and Thaddeus Wilson brought home two runners in the first inning while Richie Rios brought one home in the third inning.

“They had tough at bats, and I threw a lot of pitches,” McFarlane said. “Individually, I did OK, but this was a team job. We fought, and this year’s team is different. It’s all about the grind and playing nine solid innings.”

It wasn’t until the third inning when the Wildcats started doing damage. JT Navarro advanced home on a wild pitch and Wissler and Muñoz added RBIs to tie the game at 3-3. The Gators’ last run came in the fifth inning when Jackson Kritsch scored after reaching third base on a triple.

Following the seventh inning stretch, the Wildcats were down three runs with the top of their lineup due at the plate. Navarro got the rally started by getting a walk, Turner Olson got a single and Willie Lajoie reached first base thanks to an error.

Zavala tied the game up with an RBI single and then Muñoz brought home two more with this two-run RBI double. Muñoz ended 2-4 with three RBIs.

Olson, a junior outfielder, also had a solid day at the plate going 3-4 with three singles. Olson said this team is resilient and had some tough at bats.

“We all rallied together as a group, and I think we have a special team this year. I saw a lot of high sliders, and we capitalized on their mistakes,” Olson said. 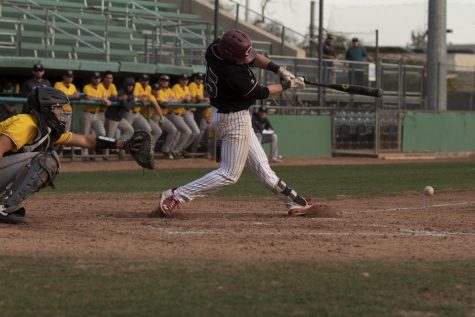 Turner Olson hits a chopper for a single.

Looking ahead, the Wildcats will take a trip down to California State Monterey Bay next weekend for a four game series starting at 6 p.m. Feb. 21.