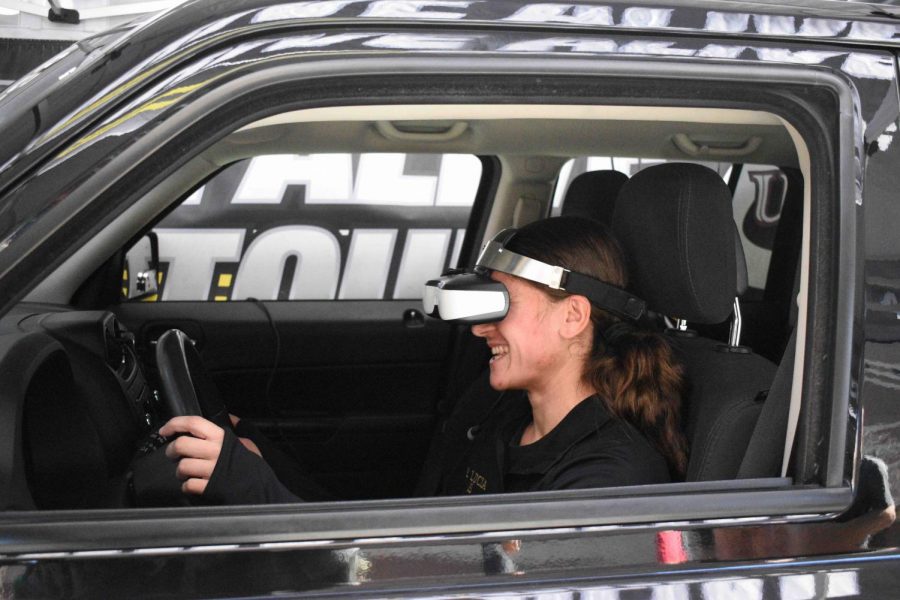 Bryanna DeLucia participated in the Arrive Alive Tour’s Drunk Driving Simulation where she attempted to drive after the system was set to five drinks in one hour.

The UNITE ‘Arrive Alive’ tour set up outside of Tehama Hall to present a distracted driving simulation to students at Chico State on Feb. 11.

During these scenarios, students sat in the driver’s seat with the car battery disabled and the car mobilized. While the experiment was controlled, sensors connected to the vehicle would allow the driver and others to witness their mobility.

Danielius Palespsaitis, who was facilitating the simulation for students, explained why UNITE added the new feature.

“Marijuana is being more and more legalized and there’s been a lot of conversation about it,” Palespsaitis said. “Marijuana has similar effects as alcohol—slow response time and the simulation mimics that in the most real-life way.”

After every simulation, drivers received an infraction ticket that would detail their offenses based on their performance.

“Our goal is to show you that these activities are wrong, hard and illegal for a reason,” Palespsaitis said. “We watch what you do on the roads, write you a ticket. It’s all prevention. We want everyone to think twice and make good decisions.”

Bryanna DeLucia tried the simulation for her Health and Community Service 370 class, ‘Drugs and our Society.’ After the simulation she received an infraction ticket for speeding, swerving, driving off the road and causing a collision with a blood alcohol content of .11.

“I’ve been driving since high school and I’ve never driven like that before. It was definitely a lot harder than I thought it would be. Normally I’m the designated driver. I knew how bad it was but I didn’t realize it to the extent,” DeLucia said.

Palespsaitis included why UNITE added the texting and driving scenario for students.

“Not a lot of people know that texting and driving is the number one cause of accidents on the road — more accidents than drugs and alcohol combined, so it is a pretty big thing,” Palesspsaitis said. “Everyone thinks they’re good behind the wheel but that’s not always the case.”

In 2018, a crash along Highway 99, caused by intoxicated driver, 24 year old Adnan Mubarak, caused a collision into a freight liner, leading the liner to lose control and crash into an oak tree, killing the passenger of the liner and severely injuring the driver. While Mubarak did not receive any injuries, he was arrested by the Chico Police Department on suspicion of vehicular manslaughter with gross negligence and driving under the influence of drugs and alcohol resulting in injury to others.

In 2013, Kristina Chesterman was killed by a drunk driver after riding her bike home on Nord Avenue. The killer, 20 year old Riley Dean Hoover, was found guilty and sentenced to five years in prison.

In 2012, 22 year old former Chico State student Alexander Green, was found guilty of charges including two counts of gross vehicular manslaughter while intoxicated after a drunk driving crash killed two of his passengers in San Luis Obispo County. Green was sentenced to four years in prison.