“We Shall Overcome” evokes the spirit of African American leaders 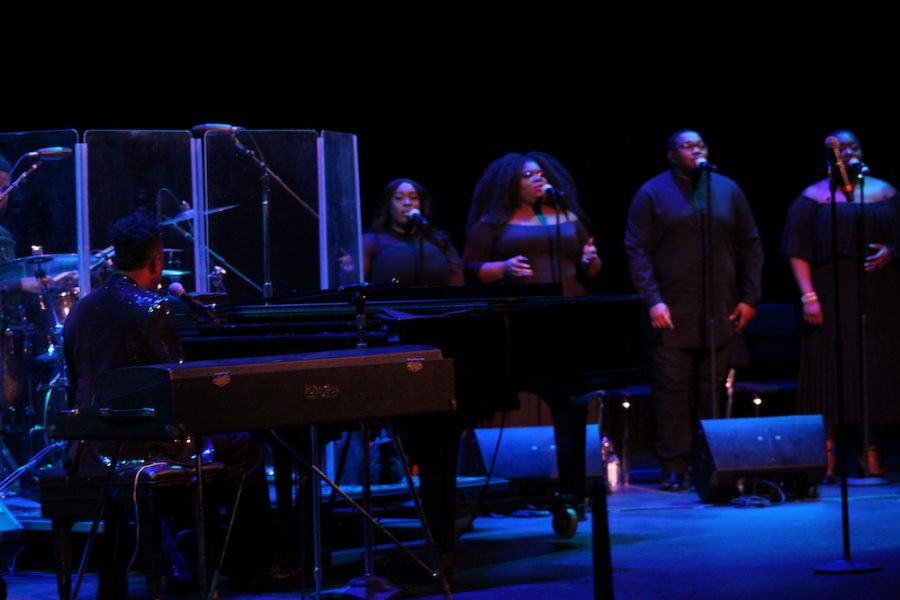 Damien Sneed performs jazz songs with a choir to set the mood.

Chico Performances hosted the musical production “We Shall Overcome” in celebration of the life of Dr. Martin Luther King Jr. at Laxson Auditorium on Saturday night.

“We Shall Overcome” is led by Damien Sneed, a pianist, organist, conductor, composer, producer, arranger and arts educator. He has a background in classical music and has worked with legendary acts like Arethra Franklin, Wynton Marsalis, Stevie Wonder and Diana Ross.

The production opened with its namesake “We Shall Overcome” — a gospel song that famously became a protest anthem during the Civil Rights Movement. Throughout their set, the band performed covers from musicians like Duke Ellington, Stevie Wonder and Nina Simone, and a handful of Broadway classics.

Sneed was an energetic performer who effortlessly captured the attention and engagement of the crowd. Many times throughout the set, Sneed would call on the audience to participate. He was met with enthusiasm when he asked them to clap, sing or dance along.

At one point during the show, Sneed asked all of the women in the audience to stand up for Arethra Franklin’s “(You Make Me Feel Like) A Natural Woman,” which he dedicated to them.

At the end of the concert, Sneed opened up about his personal experiences and how they shaped the music he creates.

Overcoming hardship was something that Sneed brought to the forefront of the production. From his early childhood, he struggled with a speech impediment and being labeled as autistic. Throughout his career as a musician, he was met with criticism about what he should be doing with his life.

“I was a classical piano major and they told me, ‘You should be doing jazz. As an African American, you won’t be able to do classical music’,” Sneed said.

Sneed was passionate about something that African American musicians, artists, poets and civil rights leaders have evoked for decades — resilience.

“That’s why we do this … travel all over the world,” Sneed said. “Music is the universal language and the reverend Dr. Martin Luther King Jr.’s message was for the world.”

Damien Sneed and his band are currently on tour, with upcoming shows in the northwest and Canada. Sneed has additionally been commissioned to compose music for the Houston Grand Opera, which is set to premiere on March 5.