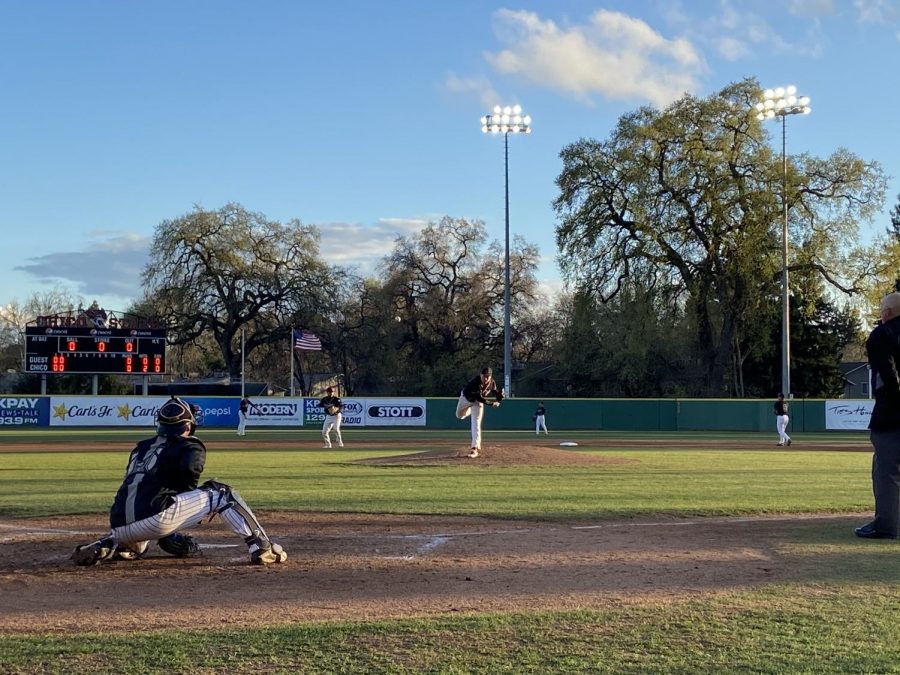 The Wildcats warm up going into the third inning against Cal State San Bernardino.

The Wildcat baseball team (14-7) flipped the script on Cal State San Bernardino (7-14) on Saturday, winning 3-0 after losing their last matchup 0-3.

Chico State had the four-game series tied up 1-1 prior to the game against the significantly lower-ranked Coyotes. The Wildcats toughed out this win through their solid pitching staff, aggressive baserunning, and clutch defense.

The bulk of Chico State’s offense came in a tumultuous third inning. The inning began with junior second baseman Andrew Renteria reaching base with an infield single. With leadoff man JT Navarro at the plate, Renteria zoomed to second on a hit and run. The pitch was extremely low and outside, bouncing off the dirt before Navarro did his best golf impression, smacking the ball to shallow right field for a double.

“It was a hit-and-run so I was swinging no matter what. I probably could have not swung because it was a ball in the dirt and he (Renteria) could have probably got [to second], but I swung anyway and it happened to go my way,” Navarro said.

With Renteria and Navarro in scoring position, designated hitter Aiden Rasmussen reached on an error and allowed Renteria to score. Junior first-baseman Willie Lajoie was up next and hit a hard ground ball to third, Navarro faked going back to third base before taking off for home, scoring after the Coyote third baseman threw the ball to first base, making the lead 2-0.

The Wildcat pitching staff had a successful night, throwing a shutout and allowing only three collective hits. Junior starter Braeden Gowdy got his first win on the season and was relieved by Connor Sealy, Alex Kent and Kristian Scott to secure the save.

“Each guy has got each other’s backs, and we play for each other here. Our bullpen has been phenomenal, they have locked down especially in close situations,” Gowdy said.

Not to mention, the Wildcats switched up the starting lineup, resting a few regular starters and electing some bench players, specifically left-handed hitters. Willie Lajoie, however, did not rest tonight and went 1-3 with an RBI and a walk.

“I know that the wind is blowing straight out to right, so maybe Coach is trying to get some lefties in to get a ball in the air and get it out to right field,” Lajoie said.

Chico State has consistently pulled out wins in close games this season. Each loss they have taken has had a score margin of at least three runs, while securing victories on every game with a margin of under three runs.

“We’re a bunch of grinders, we love the tough part of the games. We love the close games, it’s where we feel comfortable,” Lajoie said

The Wildcats look to face the Coyotes once more on Sunday, March 8 to conclude the weekend series.