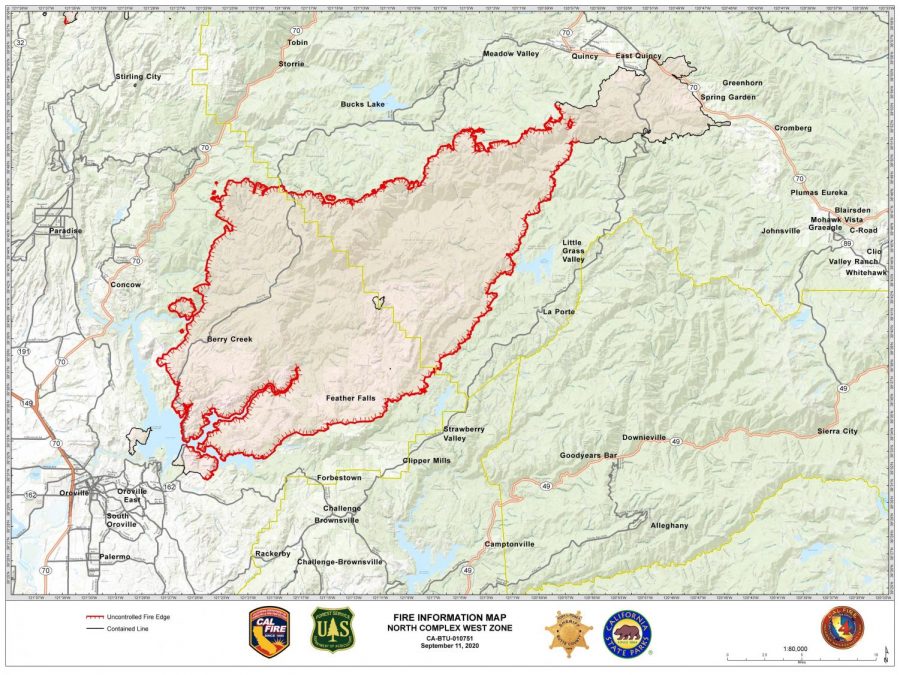 California Gov. Gavin Newsom arrived in Butte County on Friday amid the raging North Complex Fire and signed legislation, AB-2147, striking down barriers for inmate firefighters to become licensed after serving their sentences.

“Inmates who have stood on the frontlines, battling historic fires should not be denied the right to later become a professional firefighter,” Newsom wrote on Twitter.

The complex fire has consumed approximately 70,000 acres. With more than 28 major fires burning throughout California, the state has ordered 42 inmate fire crews to the fire’s West Zone. More than 500 inmates are on the front lines, said Lieutenant Benjamin Ingwerson, agency representative from the California Department of Corrections and Rehabilitation.

“Our hearts go out to Butte County and what they’ve endured and what they’re currently going through,” Ingwerson said. “We were here with you during the Camp Fire and we stand with you today.”

An additional 1,800 firefighters from California, Canada and surrounding states have arrived in Butte to help out.

“We have requested additional resources in the form of urban search and rescue teams who will be deployed to help us search for the remains of humans who may have perished in the fire zone,” Butte County Sheriff Kory Honea said. “Right now the areas that we need to search are too hot and Cal Fire has asked us to wait to deploy those once it’s safe to be done, and it looks like we are going to start that deployment Monday.”

Sheriff Honea lowered the death toll from 10 to 9 after ruling out one set of human remains as non-fire-related2 of the 9 deceased have been identified — 77 year-old Milicent Catarancuic and 16 year-old Josiah WilliamsThere are currently 28 major fires or complexes burning throughout California with 24 new fires starting since ThursdayThe North Complex Fire has burned 252,000 acres with 21% containment while the  Butte County West Zone fire has burned 70,500 acres with 5% containment.Butte County responded to 151 welfare calls; 123 have been found, and 19 are unaccounted forThere are currently 23,300 structures threatened and 44 single-residence structures have been destroyedAssigned resources to the North Complex West Zone include 1,837 personnel, 123 engines, 57 dozers, 63 water tenders and 11 helicopters

Weather conditions have remained favorable for firefighters and other personnel. Dan Borsum, an incident meteorologist, said the smoke should last through Saturday. He predicted Sunday and Monday would bring more sunshine and higher wind speeds.

“Tomorrow’s forecast should be very similar to today’s forecast,” Borsum said. “The smoke should clear out which will lower the humidity, increase the temperature and increase the slope winds.”

Residents who have evacuated can expect more information about the condition of their homes in coming days. Seven teams will be conducting damage inspections starting Saturday.

“They started this morning and usually start in the most concentrated area first and they are collecting damage, destroyed and non-damaged structural information,” Kaufmann said. “Photos are taken of each property they inspect. They do not inspect near active firefighter activities.”

Honea reiterated his team’s commitment to protecting evacuees’ homes from looting and trespassers.

“Someone who goes into an area that has been evacuated because of a fire or other catastrophe and preys upon the innocent victims that are in there is the lowest form of scum,” Honea said. “And if we catch you, we’re going to do everything in our power to make sure that you’re prosecuted and you spend time in jail.”

Matthew Wreden, Chloe Curtis and Kimberly Morales can be reached at [email protected] or @bymattwreden, @ChloeCurtis__ and @kimberlymnews on Twitter