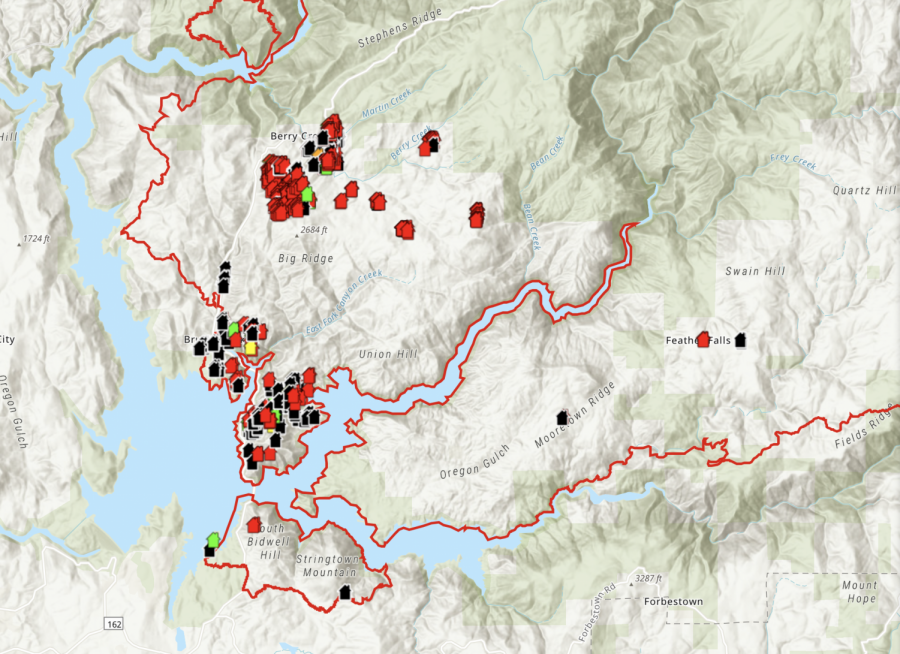 Brush Creek, Berry Creek and Feather Falls have been the most damaged areas in Butte CountyButte County has responded to 174 welfare calls; 149 have been found and 13 remain missingPeople who have evacuated can go here to view damage inspection reports of homes and businesses28 major fires or complexes continue to burn in California, with 12 new fires starting since Friday2.8 million acres have burned in California since Aug. 15Over 16,000 firefighters and 2,200 fire engines are fighting fires across the state, not including volunteers from Canada and across the country132 single resident structures have been destroyed; 36 commercial buildings and 59 “other” buildings have been destroyed

President Donald Trump will visit Sacramento to receive updates from firefighters and other officials. Trump will hold a press conference with Cal Fire officials in Sacramento’s McClellan Park, a former military base.

Dan Borsum, an incident meteorologist, predicts that weather conditions will change for the worse on Sunday and continue through Monday. A red flag warning could arrive as early as Sunday afternoon.

“There are a number of weather factors that’ll come into better alignment on Monday that are going to make conditions supportive of fire activity,” Borsum said.

Weather changes will bring more sunshine, higher temperatures, increased winds and a drop in humidity. Gusts on Monday may reach 16 to 18 mph. Winds will help clear smoke from the sky, but will also exacerbate fire conditions.

Seven teams of two began damage inspection today during daylight hours. Their information has been uploaded to a data collection app where residents can view their properties. Steve Kaufmann, a spokesman for Cal Fire, said he expects the website to be updated two to three times a day.

“They normally start in the most concentrated area first and they collect damaged, destroyed and non-damaged data,” Kauffman said. “They collect data on an ESRI data collection app and photos are taken of every single property.”

California continues to ask for help from other states.

“The state of California has reached out once again, as we did several weeks ago, to out of state resources, bringing them in to help fill the need not only on this fire but the other fires that are happening in Mendocino and Humboldt County, down in Fresno County, Mariposa County,” said Dave Russell, incident commander of Cal Fire Incident Management Team 4. “So hopefully, in the next few days we will start seeing those resources come in.”

Russell expressed his gratitude to citizens who sought to donate food items, clothing and other products to firefighters.

Matthew Wreden and Chloe Curtis can be reached at [email protected] or @bymattwreden and @ChloeCurtis__ on Twitter.