Learning from the Past: How our current political climate resembles the fall of Rome’s Republic 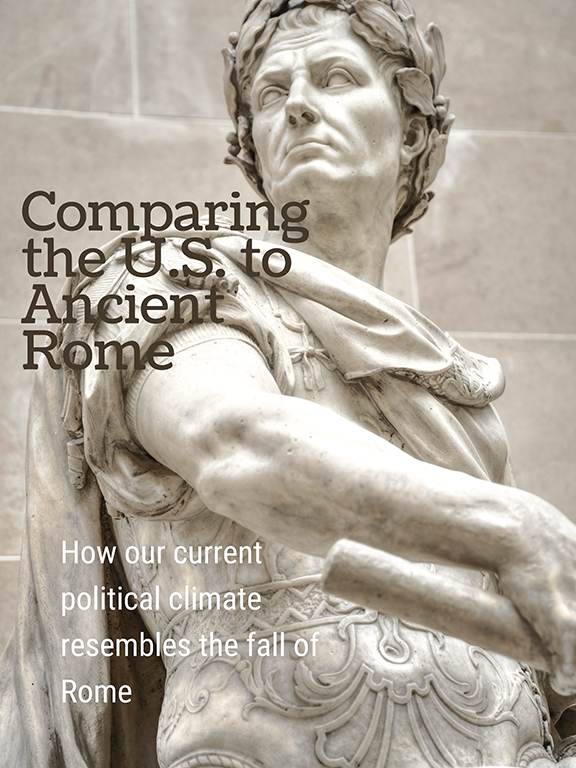 The United States is heading down a dangerous path. It is truly ironic that our nation was loosely founded on the political system that the Roman Republic once used and is spiraling down a similar path that led to its downfall. You may have heard the saying: “The past always repeats itself” Well, in this case, it certainly seems so.

When most people think of ancient Rome, they remember it for its gladiator fights, eccentric emperors and giant expansion across Europe.. Yet before Rome became an empire, it was a republic. Similar to our political system today, Rome had a senate, which was the main legislative body, composed of citizens who were appointed by an elected official known as a censor. It also had two men who were elected yearly to the position of consul, the highest ranking position in republican Rome, who also had the responsibility of leading armies into battle.

Now, you might be noting that aside from these similarities, the U.S. is still a democratic republic, right? Yes, it is, but the way Rome fell is similar to our nation’s current political climate.

Look at it this way; toward the end of Rome’s republic, corruption ran rampant throughout the senate, with senators and other politicians accumulating vast amounts of wealth for themselves, making decisions based on what would benefit them personally, as opposed to benefiting the republic and its peoples.

The people became fed up, as the disparity between the rich and the poor grew so vast that ordinary citizens no longer believed that their government cared.

Along came a man named Julius Caesar, a renowned general who had immense public support. He was heavily opposed by the members of the senate, who declared him an enemy of the people and directed him to disband his army and return to Rome (He was away governing the province of Gaul, modern day France).

The rest is one of the most well known stories in history. Caesar crossed the Rubicon River and took command of Rome, ousting much of the senate and declaring himself dictator in the name of  “saving the republic.” He appointed people to the senate and other positions who were  strictly loyal to him. Then he restructured the republic as he saw fit.

Sound familiar? It should. Take a look at what happened in the 2016 U.S. election. Donald Trump, while not as widely popular as Caesar, used the discontent of the people and the corruption in government to rile up his base. He proclaimed himself a champion of the common person. Both men were also rich (Caesar, at this point, was the wealthiest man in Rome), and both had little political experience (Caesar was a general, Trump a businessman).

Now, I am by no means saying Trump is trying to get himself declared dictator, but the similarities of the political climate are far too similar to go unnoticedable. Caesar did not create the Roman empire as we know it today;he  was merely the precursor of what came after him. (The empire was created by his successor, Augustus). Trump is similar in this fashion, as he is actively creating policy and practices that are slowly eroding our democracy.

Take, for example, his statements on vote by mailing. Trump has continuously stated that voting by mail is unreliable and unsafe, and will likely lead to his opponent winning due to widespread election fraud. Is this true? Absolutely not, as there is zero evidence that voting by mail is any less safe than voting in-person. Yet Trump can be considered to have, like Caesar, popular sovereignty (public support)—at least among his base. Caesar was able to take the city of Rome because the population of the city welcomed him with open arms. What will Trump be able to do if he convinces his supporters that the election results are false due to voting fraud?

Again, like Caesar, Trump has placed allies in key positions of the government. These are people loyal to him, not necessarily the republic. Take his pick for the Postmaster General, Louis DeJoy, who since taking the position has enacted policies to slow down the delivery rate of mail throughout the nation. Why, you ask, would he do this? Simple, while it may be under the guise of budget cuts, Trump has admitted these changes will make it more difficult to vote by mail during a deadly pandemic, potentially disenfranchising  many who would otherwise oppose him.

Regardless of the outcome of the 2020 election, Trump has already begun the process of eroding our democracy and republic. The lessons of the past seem to repeat themselves time and time again, with few heeding its warning: Darkness is coming.