A feminist’s struggles with the new Supreme Court justice 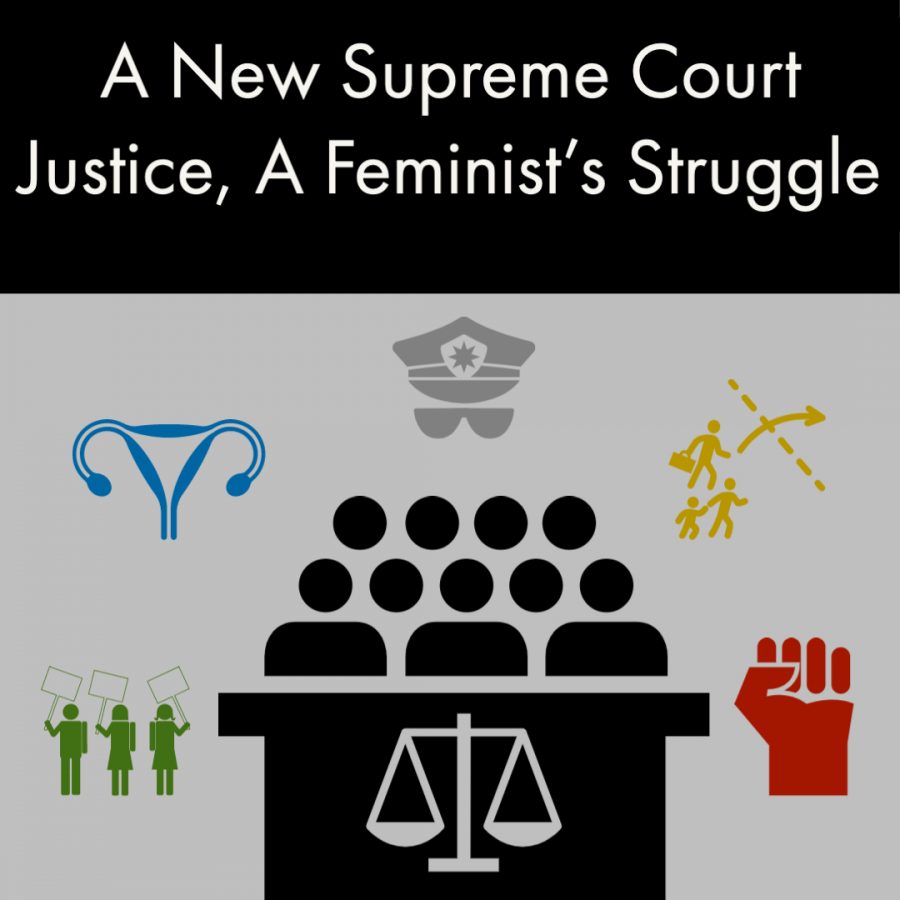 As I studied for a class one evening, one of my friends texted me that Amy Coney Barrett had just been confirmed as the new Supreme Court justice. My first feeling was anger, the deep-seeded type that women are ridiculed for expressing. I wrote back to her all of my outrage  with a dexterity I don’t normally display while texting.

As a form of catharsis we texted our vexations to one another. Slowly, I cooled down from my righteous indignation and started to contemplate what it truly meant to have Barrett as a justice. As I researched her history I was less angry at Barrett and more incensed by the Senate.

As a feminist, it gets difficult to talk about women who don’t share your social and political beliefs. I always want to support women and those who identify as such because the only way we progress in our desires for equality is to uplift one another.

Barrett will be the fifth woman to take a Supreme Court seat, that’s both amazing and terrible. It’s fantastic that a woman is taking the Supreme Court seat, it’s been a long, hard fight to get the current women justices we have and previously had on the court. But just because a woman has been appointed to that position does not mean she is automatically a feminist or believes in the values that other women fight for in society.

She’s been hailed as an example of a woman who can “do it all.” She’s a hard working career woman while being a mother to seven children. There are definitely some problematic issues with this concept. When we examine this “do it all” ideal, we see that it is never applied to men and is often seen in a negative light when concerning Democratic women.

My brain once again bombarded me with the question, how do you uplift a woman who may have the power to hold back female progression in society? Many conservatives have hailed Barrett as a new figure for the conservative feminist movement.

The question here is can you be conservative and a feminist? Often these two concepts don’t agree on core values which affect women, such as reproductive rights. In an opinion article by Jessica Valenti in the New York Times, she breaks down how feminism is more often co-opted by republicans as a tool to obtain the female vote and less as a genuine concern for equality rights.

It’s hard to claim a new form of feminism as conservative when many of the policies that Republican’s wish to enforce affect women, often in greater proportion, especially those in the low-income bracket, to their detriment. You can’t simultaneously praise women for reaching higher levels of accomplishments in a male-dominated society while also taking away the ways in which they can seek and afford empowerment.

Bodily autonomy is often at the core of seeking reproductive justice. When women have power over their bodies they have the ability to make smart, resourceful and heartfelt decisions on their positions and progress in society.

While I praise Barrett for being another woman to reach the honored position of the Supreme Court, it doesn’t mean she’s obtained an exemption card to feminist dissidence.

The Supreme Court is supposed to be a court in which nine justices can discuss and vote on laws that affect the whole of American society. When first established it was meant to be a position where justices would not be affected by party bias, instead focusing on law.

While I want this ideal to be true, the fact is that the justices are human. They may try to keep their personal opinions to themselves but the fact of the matter is that we all have biases and soap boxes we’re willing to die on. I’m not saying this is what Barrett will do. That’s not a fair claim to make when there is so little of her court career that we can reference.

That dilemma worries me more than her personal social and political beliefs. In a Forbes article that detailed the lack of paperwork submitted to the Senate, we get a glimpse at how little Barret presented in her nomination hearing. Barrett was asked to turn over relevant documents to the committee to look over and only produced 1,800 pages of material.

That number is extremely low for a Supreme Court nominee. Justice Elena Kagan gave the Senate 170,000 pages of records to review before her confirmation and Justice Brett Kavanaugh submitted over a million records during his politically strife confirmation.

The number of pages doesn’t express the extent of Barrett’s career, it is concerning that it is so limited. It makes you question the extent of her experience. To teach and write academic papers on law is one thing, it is another to practice it in the courts.

I go to a doctor who has not only learned about medicine but also practiced it in the real world. This concept of experience is not just for top level careers. I look for a mechanic who has experience because I want my car fixed quickly and professionally.

Shouldn’t we be demanding more from a person who will be nominated to an extremely important position for life? It is likely Barrett, at the age of 48, will serve for at least three decades to come. Her decisions, along with the other justices’, will affect how this country is shaped for future generations.

Until her nomination by President Donald Trump in 2017 to the 7th Circuit Court of Appeals, she had not worked extensively as a judge. She never worked in the government as a prosecutor, defense lawyer, solicitor general or attorney general. She has not served as counsel to any legislative body.

These are the professional channels that Supreme Court nominees tend to hail from, yet Barrett has slipped under the radar. Of course we should value all types of ways that we gain experience and I don’t want to discredit the work Barrett has done throughout her academic career.

But again, we have to look to the position she is being nominated for. She will have the ability to affect how people get jobs, are allowed health care access, reproductive rights, immigration policy and so much more. Shouldn’t we hold her experience to a higher standard as we would any other Justice nomination?

I want all women to rise up, but that doesn’t mean I give women a free pass to oppress other women who don’t follow their moral or religious ideology. I and other women are allowed to demand more from those in a higher position of power than us. We are allowed to critique the work and judgement of those who will affect our life in American society. Erin Holve can be reached at [email protected] and @Erin_Holve on Twitter.