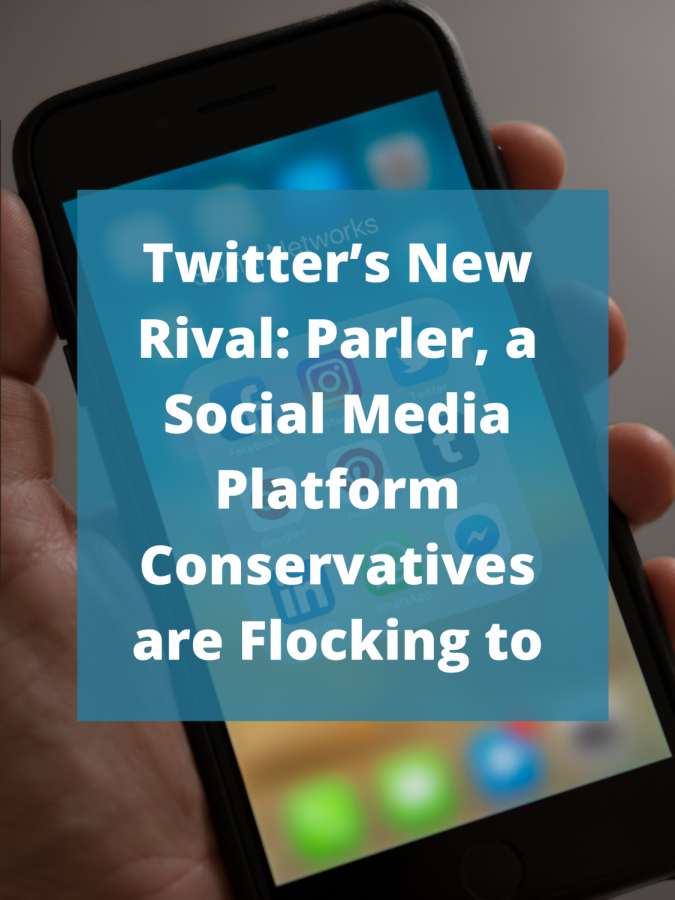 Graphic made by Jack Lewis

With Twitter now fact-checking tweets from prominent politicians and others with large followings, many conservatives are making the switch to Parler, a new social media platform that touts itself as “unbiased social media.” Shortly after it was announced Sunday that former Vice President Joe Biden had won the presidency, Parler shot up to the number one spot on both the Apple and Google Play app stores, with droves of conservatives leading the exodus to the new platform.

What exactly is Parler and why is it quickly becoming the new bastion for conservative talk? According to Parler’s official website, it allows users to “speak freely and express yourself openly, without fear of being deplatformed for your views.” Essentially, it is an unmoderated version of Twitter that allows users to say whatever they desire, without fear of being censored or banned.

The reason conservatives are moving away from platforms such as Twitter and Facebook is due to both companies implementing independent fact-checking on some content, largely revolving around politics. Facebook, for example, recently banned all groups relating to Qanon, the conspiracy theory that alleges President Trump is in a secret war against a deep state democratic pedophile ring. This baseless theory, among a plethora of other right-wing conspiracies such as Trump’s recent claims of mass voter fraud, have found a new home on Parler.

“I’m proud to join @parler_app,” tweeted Texas Sen. Ted Cruz, “a platform (that) gets what free speech is all about.” Cruz is not the only prominent republican to encourage their supporters to join the platform. Individuals such as Milo Yiannopolous, who was barred from Twitter (and the entire country of Australia) for inciting violence and Laura Loomer, a self-proclaimed proud Islamophobe (banned from Facebook for being a dangerous individual) have found new voices on the platform.

I have a number of issues with this new conservative platform. The first is that one of its owners, Dan Bongino, announced in June that he was taking a large ownership stake of the company. Bongino, a Fox News contributor and hardcore Trump supporter, has repeadedly spread false information about the coronavirus and ensuing pandemic.

The second is that since the platform has become the No. 1app in the country, many young people will be downloading it out of curiosity and be exposed to the information it contains, many of which are misleading and completely baseless. Without any fact checking or moderation, it could further perpetuate the already vast spread of misinformation throughout the nation.

In fact, Business Insider reports that we may already be seeing real-world effects from the platform. A group calling themselves “Stop the Steal,” which claims that democrats stole the presidential election, already has over 15,000 parleys (The Twitter equivalent of a retweet) since this past weekend.

Parler also states in its privacy policy that members have “no guarantee as to the security or privacy of your information.” The company can collect a user’s search history, photos, videos, and IP addresses.

Ultimately, Parler is bad news for a nation decimated by the spread of misinformation, only fueling the political rift and the divide between what is real and what is fiction. While it is certainly an interesting byproduct of Silicon valley’s attempt to end the spread of false information, its massive growth over the past week is likely to grow and continue the division of the nation.

Those interested in checking out the platform can find it here.

Jack Lewis can be reached @[email protected] or on Twitter @JackAttack722