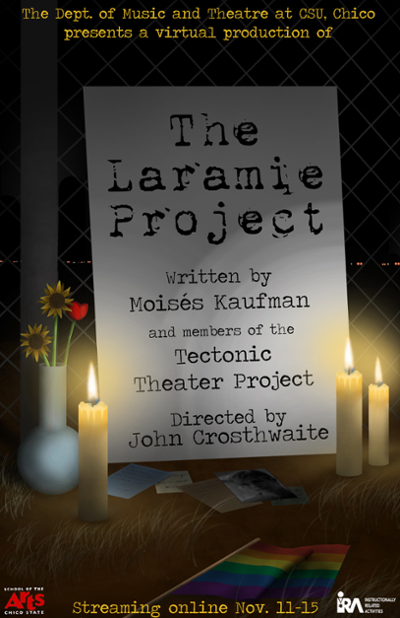 Department of Music and Theater

"The Laramie Project" streamed Nov. 11 and tells the heartbreaking story of Matthew Shepard.

“The Laramie Project” premiered via livestream on Nov. 11 courtesy of the department of music and theater. It was second in the series of virtual performances that the department has put on this semester.

The play, originally a strung together set of interviews conducted by the Tectonic Theater Project in 1998, tells the story of the murder of Matthew Shepard. Since its first performance in 2000, it has been acclaimed for its raw and real portrayal of violence against the LGBTQ+ community.

Director John Crosthwaite described the significance of choosing “The Laramie Project” to be the fall 2020 play.

“They’ve been fighting to perform this play for a few years now I want to say,” Crosthwaite said. “This is a story that needs to be told. I do know that conversations came up with students here that never heard of Matthew Shepard, or the play itself or that this was sort of the incident that created hate crime legislation.”

Crosthwaite also spoke about the virtual production of the show, and how even under special circumstances, the cast and crew were determined to get the story of Matthew Shepard right.

“We’re never going to hide the fact that it’s streaming,” Crosthwaite said. “So how do we sort of use that and almost make it a mask, so it looks more like a documentary.”

He said that the documentary style of the play was one aspect that made it feel natural for an at-home audience to watch while still emphasizing the acting in the show.

“It’s incredibly vulnerable,” Crosthwaite said of having student actors perform in their homes rather than on a stage.

Another difference in this production of “The Laramie Project” was the obvious change in communication between cast and crew members.

“So we used a program called StreamYard,” Crosthwaite said. “We were using text messages and Discord to send cues that you would normally send over a headset … so it felt more like a TV production in that sense.”

However, the cast and crew adapted to these virtual changes. “What’s neat about the theater is I think the theater likes challenges like that,” Crosthwaite added.

The director explained his pride in the cast and crew despite challenges in technology and communication, and how different the show could have been had the team given up during the filming process.

“I’m awestruck at how the cast responded, because it’s very easy to shut down very quickly … they were all so dialed in to the material and the text, that they still came off as an ensemble.”

Actor Jamie Wu also described her perspective of the filming process and how the significance of the story was something that provided the determination of the cast to tell the story right.

“It definitely was a little bit difficult, but we had a lot of meetings where we talked about how this story really did need to be heard, and it’s something that’s very important to all of us,” Wu said.

She expressed how much of the cast felt connected to the issues of discrimination brought up in the show, and how the play served as a reason for the dedication and emotional work tied into its production.

“I feel that the cast was already originally very attached to its topic and how the story can raise awareness,” she said. “With the stakes being that high I think we were able to emotionally be there to try to spread that story as best as we could.”

Wu, who plays the role of a minister and Tectonic Theater member Amanda Gronich, among several other characters, described the process of filming from an actor’s perspective.

Wu also further emphasized the social importance and weight of the production, and how even 20 years later, the story of Matthew Shepard is still one that many need to hear.

“‘The Laramie Project’ to me meant so much because crimes like this still happen to this day. It’s still very much relevant … as an ally myself I felt that it was a duty to speak up and bring this specific story to light so we can continue to spread awareness and to continue the conversation about the injustices toward the LGBTQ+ community.”

Crosthwaite shared what seemed to be a general mindset of the cast and crew of “The Laramie Project.”

“I think the arts will always respond…and this show was in some ways an experiment, but it was a live, active experiment … and a really beautiful piece of art came out of it,” Crosthwaite said.

The director added that this show was one that felt appropriate during a time when many people have lost hope and faith in their communities.

“This story needs to be told right now … amidst all sorts of heartache and pain and a country that needs to heal, and now we’re looking at a show that is all about healing.”