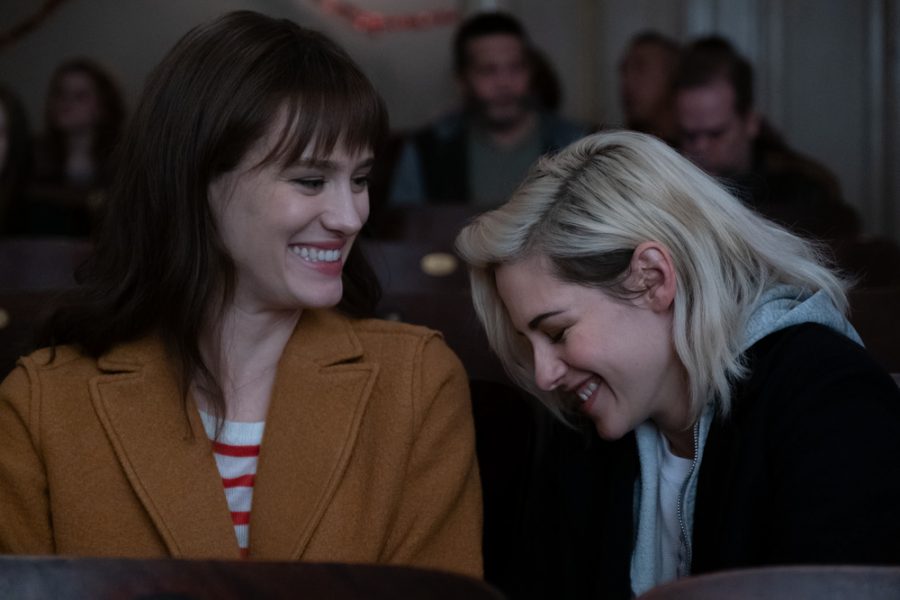 “Happiest Season” is a family holiday romcom that should surely be at the top of your list to watch this holiday season. The movie has put its own spin on a frequently used holiday movie theme.

The main character, Harper (Mackenzie Davis) brings her girlfriend (Kristen Stewart) home for the holidays. Except there is one thing; Harper is not out to her parents yet. The couple attempt to make it through the family’s holiday festivities without Harper’s family finding out her secret.

Harper’s family is full of familiar faces, starting with her parents (Victor Garber and Mary Steenburgen), and her two sisters; Sloane (Alison Brie) and Jane (Mary Holland). The seemingly perfect family is faced with secrets that bubble to the surface during a holiday party.

Another cast member worth mentioning is Aubrey Plaza who plays the role of Harper’s ex, Riley. Riley’s role in the film is crucial to understanding how Harper has gotten herself into this situation. Plaza perhaps is best known for her more humorous roles in comedies like “Parks and Recreation” (2009-2015), but in “Happiest Season” her character is more serious and plays a crucial element of the story. Her comedic background may be why she was able to create such a loveable character who also happens to be the ex.

As a queer director, Clea Duvall is sensitive in explaining the struggle of coming out to one’s family and how it does not reflect poorly on them and it does not mean that they do not love their partners. The way Harper treats Abby and the situations that arise, prove the relationship’s strength as the couple work through several unexpected obstacles. Although my faith in the couple wobbled a few times I never felt that the couple couldn’t overcome their problems.

It was satisfying to see Kristen Stewart play such a well-developed character like Abby. Stewart has done her fair share of work that has established herself as an actress, but this is an easy-going, funny and charming performance that no doubt makes Abby the hero of this story.

Perhaps the most interesting twist of the storyline is that Abby ends up befriending Riley. The two share what it has been like to be with Harper. Abby and Riley’s friendship is a fun and intriguing element that at times trumps seeing Abby with Harper.

“Happiest Season” is a warm and comedic story with a plethora of great performances. The film also served as a refreshing feature of queer creators and characters in a typically heteronormative genre like the holiday rom-com. This movie provides a balance of experiences that work really well and struggles that are slightly messier but that is what brings this story some realness.

I would recommend this film to anyone who is a fan of any one of the cast members or if you are desperate to find a new holiday movie that already feels like a classic. The movie is available to stream on Hulu as of Nov. 26.