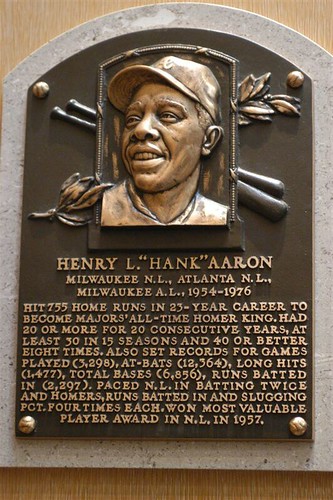 "Hank Aaron" by rgusick is licensed with CC BY-NC-SA 2.0. To view a copy of this license, visit https://creativecommons.org/licenses/by-nc-sa/2.0/

Kristian Scott, a member of the Chico State baseball team and current senior, admires the sacrifices that Aaron and Jackie Robinson dealt with during their historic careers.

“Just like Jackie Robinson, they both went through a lot of stuff that I can’t even imagine that paved the way for players like myself to be able to play the game,” Scott said. “I actually do have him [Aaron] as my screensaver on my laptop, and he’s been my screensaver for the last five years.”

“It just goes to show that these guys had to play with more than just your everyday struggles like lack of sleep or being sore,” Scott said. “They had to play with the fact that somebody may have done something to them just because of the fact that they are a good baseball player and they happen to be Black.”

Throughout his career, Aaron put up some impressive numbers, some of which may never be broken. He batted for 3,771 hits, making him third all-time. In 23 seasons, he became a 25-time All-Star (back when the All-Star game was played twice per season).

Willie Lajoie, a current senior and member of the Chico State baseball team, is grateful for Aaron’s legacy of breaking through the color barrier.

“Some of my best friends that I’ve made throughout the years in sports have been African-American,” Lajoie said. “It’s awesome.”