A chance to lead the Associated Students 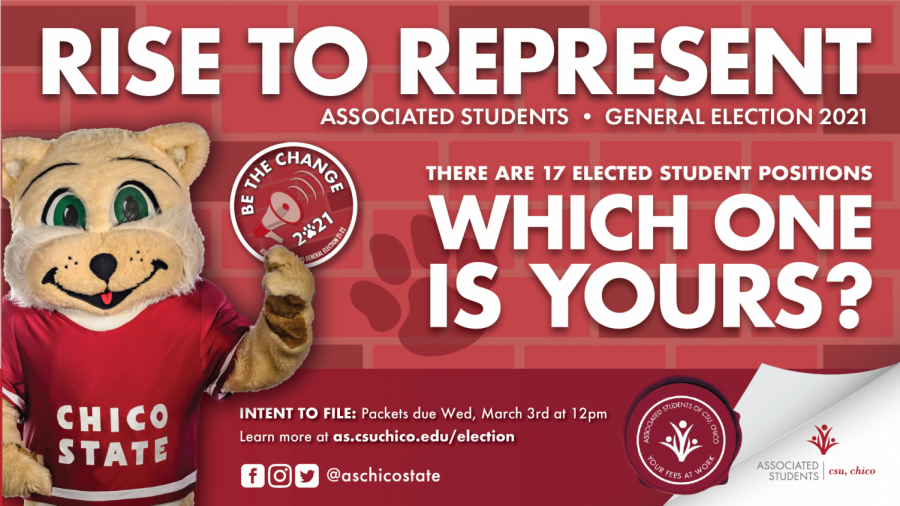 Chico State’s Associated Students are holding their annual election and campaign season from March 12 to April 8. There are 17 positions available: six board of director roles, four commissioner roles and seven senator roles.

“Running for a position provides huge personal and professional development opportunities, mentorship opportunities, a glimpse behind the scenes of higher education and business, and the chance to participate in shared governance,” Election Supervisor Eliza Millers said.

Chico State’s Associated Students is the only auxiliary corporation in charge of the Student Union, Student Government and Dining Services.

“No other California State Universities auxiliary does all three,” Millers said. “Most campuses have two or three separate businesses that are running each of those facets of student life.”

Candidates must meet several requirements to apply. Candidates must have 45 college units but no more than 132 units to apply. They must have completed 12 units at Chico State, maintained a GPA of 2.5 or higher and enrolled in at least nine undergrad units or six graduate units. They also can’t be employed by AS or must resign before taking office.

Commissioners help identify issues and take action. They voice issues and concerns to the university and organize student events and opportunities. Commissioners can’t be employed in any AS funded activity but can be employed in other areas like Adventure Outings or Dining Services as long as they don’t exceed 20 work hours a week.

There’s seven senators for each of the colleges at Chico State. Senators help distribute newsletters to their college, serve on a sub-committee of the academic senate, implement legacy projects within their college and help to facilitate meetings.

There’s no employment restrictions for senate members. Senator work load varies from college to college, so candidates should reach out to whoever’s in-charge for more information. Senators need to be declared a major within the college they are applying to represent.

Instead of 45 completed units like board of director positions, commissioners and senators candidates qualify with at least 12 units completed at Chico State. While in office they must serve five mandatory office hours weekly.

Intent to File Application Deadline: Candidates must meet with election supervisor via Zoom and submit applications before March 3 at noon. The ITF period is a screening period to see if candidates are qualified and able to hold office.Declaration Packets will be sent to eligible candidates on March 8 and must be submitted before March 11 at noon. Candidates must declare what position they are running for in the packet.Campaign season is March 12 to April 8. This year traditional campaigning tactics won’t work due to COVID-19 restrictions, so candidates need to get creative with their campaigns.Election results are shown the afternoon of April 8.

“The AS is a business bottom line,” Miller said. “So you’re getting to make business decisions.”

Miller said being a part of AS gives students a chance to be a part of shared governance.

“Representing the students on campus when decision making affects them, to voice your concerns, voice their concerns, so it’s a really great opportunity,” Miller said.

For more information about open positions, candidates should reach out to respective leaders that are currently in that position or attend meetings in which that position is helping to facilitate.