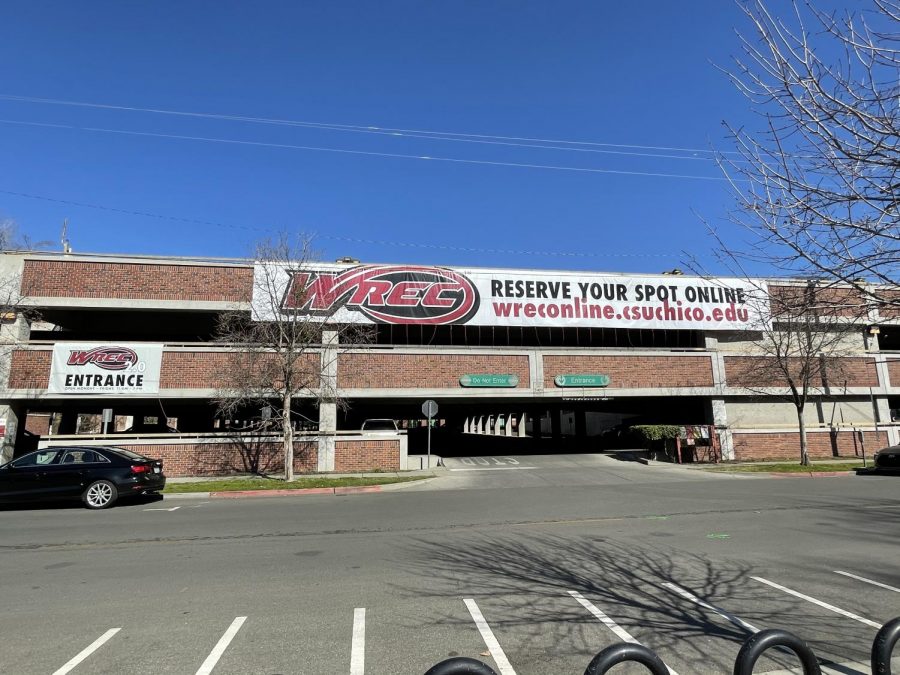 The front of the WREC 2.0 displays a sign giving instructions for how to reserve your spot for the WREC. Photo by Connor McPherson -The Orion

The Wildcat Recreation Center faced challenges last year when it closed in April 2020 and reopened in October. The WREC transitioned to being an outdoor facility on Jan. 25. The outdoor experience, called WREC 2.0, is located on the second floor of the parking garage across from the WREC at 2nd and Cherry St. and is open from 11 a.m. to 7 p.m Monday through Friday.

Ever since COVID-19 guidelines led to the closure of gyms in Chico, the fate of the WREC has been uncertain. As cases continued to rise as the year went on, it was clear that the WREC would not be able to remain open. In October, Chico State reopened the WREC at 10% capacity with new limitations. These included requiring gym reservations in advance, requiring the use of masks, and limiting gym-goers’ use to the section that they signed up for.

In January, the decision to transition the WREC from inside to outside was made. WREC Associative Director Teresa Clements talked about how the decision and execution wasn’t reached overnight, but required some planning in advance.

“We worked on planning this a long time ago,” Clements said. “This was a plan we had back in the summer.”

It took plenty of hard work to prepare to move all of the equipment to the outdoor setting. It involved planting turf and organizing machines to allow for 6 feet of distance between them. Clements emphasized that despite all the hard work, the move was fairly trouble-free. 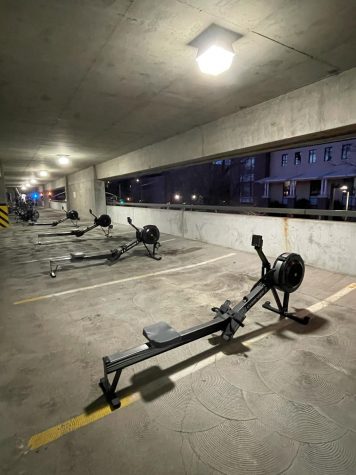 Rowing machines are lined up six feet apart from each other at the back of the WREC 2.0. All equipment is spaced out at this distance as a precaution. Photo by Connor McPherson – The Orion

“It went together pretty smoothly once we got movers in and people to install the turf and everything we’ve had going on,” Clements said. “We moved equipment, we stored a lot of stuff to give more spacing, we shut down certain machines.”

One student, Paul Perez, a fourth-year at Chico State, enjoys going to the WREC 2.0 because of the precautions it takes, as well as the fresh air.

One of the changes that was more controversial among students was the mandate for students to wear masks at all times when working out. This made some upset, because it would be harder to work out, but Clements explained that it was a necessary measure that had to be made.

“That was all part of the deal to keep it open was that people have masks on and we keep them apart,” Clements said.

The stairs that lead to the second floor of the WREC have a sign containing instructions for what is needed when entering the WREC 2.0. Photo by Connor McPherson – The Orion

“Some changes I’ve noticed are that it’s very spaced out and distanced,” Sanchez said. “They’re on top of cleaning and sanitizing areas people touched.”

The WREC 2.0 appears to be doing well as a solution to the issue about the fate of the WREC, and Clements is happy about how it has gone.

“In general, it’s all been mostly positives for sure,” Clements said. “I think the students are feeling that way too.”

Connor McPherson can be reached at [email protected] @theGOATMcphers1 on Twitter.