Where the passion of politics originates 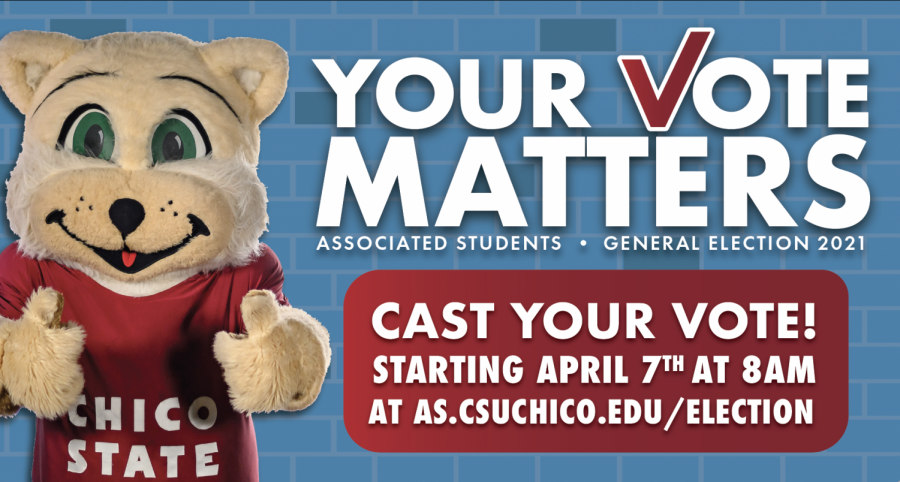 For the love of politics, this piece focuses on how Chico State’s Associated Student presidential candidates found their passion for advocacy and student government, and their main priorities if elected. There are three candidates running for AS President: Jennifer Mendoza, Duncan Young and Ella Snyder. Voting starts April 7 at 8 a.m. and is open for 24 hours, it closes April 8 at 8 a.m.

Giving people platforms, Mendoza is all about advocating for those without a voice.

“I want to be the top advocate for students without a voice,” she said. “I would still be advocating even if I wasn’t running for office. It’s something I’m passionate about.”

Mendoza attended a Oakland Charter High School growing up and noticed how little students had the opportunity to voice their opinions. This irked her, so she helped establish the student government her sophomore year with a group of other concerned students.

“We always talk about change but don’t really see it,” Mendoza said. “I want to see that growth in action.”

At a freshmen orientation event, she pulled aside former AS president Alisha Sharma and asked questions about how to get involved. “I remember I stopped [Sharma] there,” Mendoza said. “ I wanted to know how she got there.” Mendoza became interested in student government after attending some Freshman Leadership Opportunity meetings.

She said while some meetings can be watched by students, they are not allowed the ability to participate. “[Students] are not really welcomed in these spaces,” Mendoza said. “ I want to change that.” She wants to have students present in the decision making process.

Mendoza aims to continue the effort of reforming the Chico State campus culturally and systematically. “I’m passionate about leading authentically and courageously,” she said. “I stand for leadership, advocacy and resilience.”

I came out in the [AS candidate highlights],” Mendoza said. “I was trying to find myself throughout this whole process, it didn’t feel authentic if I didn’t include that part about myself.

Mendoza wants students to see all of the policy making and be in the decision making process. “They must see power, to believe power and act upon that power,” she said. Mendoza believes students will become empowered after learning the power of their voice.

Mendoza is currently a junior majoring in political science. She was born and raised in Oakland, California.

“My commitment to accountability and execution of social justice reform is intersective in every aspect of student life,” Mendoza said. “Whether it is receiving an equitable education, addressing UPD reforms and the mental and physical well-being of our students.”

Coming to Chico State has been a once-in-a-lifetime heartfelt experience for Duncan Young. He wants others to have access to the same opportunities. He felt disassociated with school, and graduated early to work full-time. “I really didn’t feel connected or relevant,” he said.

It wasn’t until coming to Chico State did he find a sense of community and belonging. It was the first time in his life moving, but quickly made friends by joining Chico State’s Rowing Team and Student Advisory Committee his first semester. “When I got to college, I realized there is a lot to do here,” he said. “I really want to do my best to make a difference.” Young first got his foot in the door with student government by joining FLO.

“I’ve never seen such a great community of people. There are very few people that you come across that don’t want to help you out, or answer questions,” Young said. “It’s just a really good place to be.”

He wants to put student activists who are passionate and others without a platform in the spotlight, so they can pursue projects. “I believe that by placing our passionate student activists in a ‘room where it happens,’ that is, appoint them to committees,” he said. “We will allow passion to drive change.”

Young is currently a junior majoring in economics. He was born and raised in Livermore, California.

Young said he’s not going to be the candidate who promises to solve every problem. “But, what I will do is actively listen because I recognize I can’t pretend to know everything,” he said. “No one is perfect.”

“I believe that by creating more transparency and connectedness we will show our unified voice and efficiently plan out what needs to occur for us to create the change that the student body demands,” Young said.

Young hasn’t held a position in office unlike his competitors and believes that gives [him] more insight on how students feel. “I believe that would give me a unique perspective ,” he said.

Elected officials have limited time in office and can’t make changes within their term. Young’s main objective is to create a system where problems can be addressed and solved within one or two years instead of a few.

Ella Snyder has a lifelong dream of going to law school and becoming an attorney. “I have always wanted to be a lawyer since I was five. I don’t know where the idea came from,” she said. “All my family members were STEM people.”

Snyder had no interest in student government until coming to Chico State. After seeing how much voice and power elected officials had, Snyder caught interest when she realized she could help students have a role in participating. “That is exactly the type of work I want to be doing.” Snyder said.

Snyder has dreams of helping people of lower economic background and mental health issues. “I want to help people whose rights have been violated,” she said.

Snyder has four majors: political science, psychology, sociology and criminal justice along with a paralegal certificate. She’s set the graduate on time. Snyder went to her local community college in San Luis Obispo while in high school, so she enrolled as a sophomore majoring in political science her first year at Chico State.

She added a second major the first week of her first semester, and a third one her second semester. Snyder realized she was finishing classes too fast and was going to graduate early, so she added a fourth major to relish the Wildcat experience.

Snyder was one of two freshmen who ran for AS and became a senator as a sophomore. She was the youngest working at a community legal information clinic.

Snyder’s main three objectives are opportunity, motivation and assistance. She believes that students should have the opportunity and resources to receive a quality education. Snyder wants to motivate students to live their best lives. “It is important to be recognized, empowered and have a sense of belonging when fostering a healthy learning environment,” she said.

Snyder wants to assist students by advocating for the essentials: food, work, housing, mental health services and any support system that helps student’s voices be heard. She wants to hold people accountable, and have students in the rooms where decisions are being made.

“I want to inspire students to believe in themselves and discover or reinforce their identity, passions and interests,” Snyder said. “My overall goal is to foster a sense of security, safety and belonging by creating systematic changes and providing support to students.”

More information about the candidates can be found on their Instagram pages: @DuncanforASPresident, @EllaSnyder_aspresident and @Jenniferm4prez.