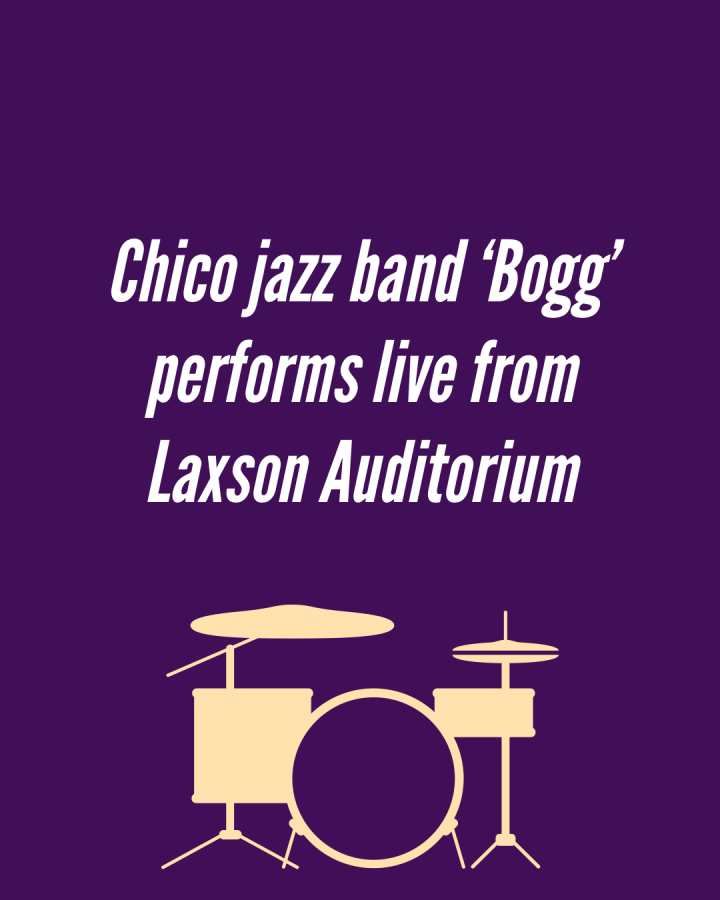 The jazz quintet known as "Bogg" performed from inside Laxson Auditorium on April 2 in a Chico Voices virtual event.

The Chico jazz group Bogg performed April 2 at Laxson Auditorium for a livestream event.Chico News and Review’s Jason Cassidy joined the band onstage to guide the conversation around the band members and their music. The performance will be available on-demand until May 2 thru the University box office website.

The band formed back in 2012 when Josh Hegg and Micheal Bone wanted to experiment with keyboard and drum music. They later added Gavin Fitzgerald as the bassist. Shortly after, the group played their first gig at Cafe Coda, where they performed in papier-mache masks.

“This led to us toning it down a bunch, leaning further towards straight-ahead jazz but still with our experimental, alternative roots.” Bone said.

Bogg is now joined by Matt Weiner and Madison DeSantis, making it a quintet. The band’s Facebook contains clips of the members jamming as well as general information about the band.

The group loosely considers themselves a jazz band, but considers their music as an experiment that transcends genres.

“I always think of us as a composer’s band,” Hegg said. “We just want to experiment with what sounds we can make and grow and mature as musicians.”

Two of the band’s members moved to Portland during the pandemic.

“We are friends first so any time we are in the same town together, might as well play music because that’s just what we do,” Bone added.

The band opened with a song called “All Alone.” Bogg used their time in Laxson to perform a wide range of songs, most of which were written during the past year.

“Chico has influenced us a bunch, we’ve often seeked collaboration with exemplary community members,” Bone said. “I’d say it adds to our laid back and fun-loving stage presence too.”

Currently Bogg does not have any planned performances. The band’s discography is available on Bandcamp.

The university has hosted several livestream events during the pandemic, including a similar concert event by The Bidwells.