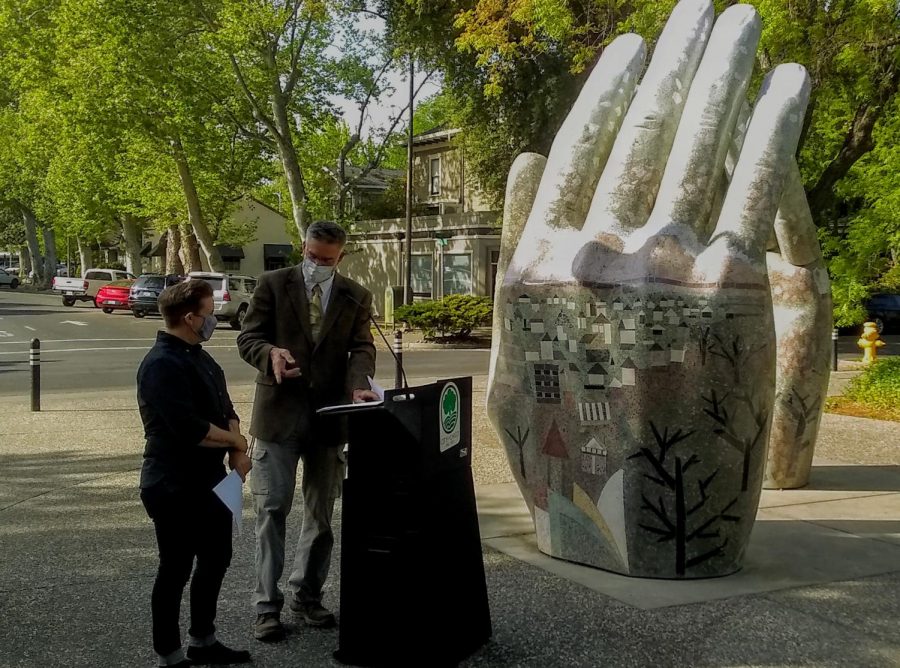 Chico Councilmembers Alex Brown and Scott Huber prepare to address issues of the unhoused and the council majority's potential violation of the Eighth Amendment.

Chico City Councilmembers Alex Brown and Scott Huber held a press conference Tuesday in response to what Brown called a lack of evidence-based solutions to the city’s unhoused population.

Multiple disruptions occurred. Some female attendees and journalists felt provoked by male protestors. Car alarms drowned out the speakers, hecklers interrupted the councilmembers’ messages and some protestors tried to block those recording the event.

After the press conference, Brown responded to the disruptions.

“Councilmember Huber and myself did not foresee a need for security at this peaceful protest and rally, although anyone was invited to attend and hear what we had to say,” Brown said. “In hindsight, I wish we had.” 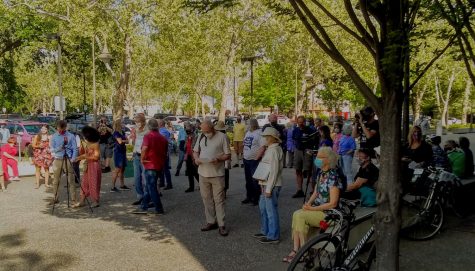 “In my 42 years as an engaged citizen of Chico,” Huber said, “I’ve seen few issues that have caused residents to question our leaders as much as the current city council’s directive to repeatedly evict people experiencing homelessness … with no alternative location provided.”

The goal of the council’s majority, he said, is to frustrate the unhoused until they go elsewhere.

These issues won’t be resolved by the removal of the unhoused, Brown added, maintaining that the primary problem “supported by years of data and expert opinion, is that we are in an affordable housing crisis.”

Brown said that each removal costs a ballpark figure of around $25,000 per sweep. She added that she’s put in a request for a more detailed accounting.

Further deepening this crisis, according to Brown, was the city’s decision led by Councilmember Kami Denlay to revoke Chico’s Shelter Crisis Declaration.

Those against the revocation say it violates the Brown Act because the motion was not confirmed in an agenda nor published for public consumption prior to a vote.

Hundreds of thousands of dollars in state and federal funding are at stake, Huber and Brown claimed, adding that if the city doesn’t walk back its decision to deny this funding by June, public services will suffer.

The Continuum of Care program, a federal service stemming from Housing and Urban Development, would be forced to rescind $420,000 through the Housing Emergency Aid Program, Brown said, which provides direct assistance to California’s homeless such as outreach, education, homelessness prevention and intervention, health and safety, and criminal diversion.

Additionally, the 2018 funding from the California Emergency Solutions and Housing, equalling $219,000, and 2019’s CESH funding for the True North Housing Alliance of $208,000 for emergency shelter services would also be lost.

Other programs that would lose funding are:

·         Youth for Change, a case management service for houseless youths.

·         Catalyst Domestic Violence Services, which provides counselling and other services for victims of domestic abuse.

“I can assure you,” Brown said, “that the crisis we have now will only be exasperated by stripping service providers of access to these necessary funding streams.”

A federal court injunction against the city’s removal of the unhoused went into effect April 11 and was based on a precedent set by the Ninth Circuit Court of Appeals and upheld by the U.S. Supreme Court. That decision makes forcing unhoused individuals from their shelters without a place for them to go a violation of the individuals’ Eighth Amendment rights, which protects against cruel and unusual punishment.

Supporters of the revocation say there are dozens of beds at the Torres Emergency Shelter at a given time.

The Chico council’s majority, Brown said, defines adequate housing as a “bed of any kind available for anyone experiencing homelessness who wants one.”

“The problematic thing about statements like [‘Chico doesn’t have a housing crisis’] is that [the city does] not account for the barriers associated with sheltering environments,” Brown added, “and the reality that there are currently no zero- to low-barrier shelter beds available for people on our streets.”

A federal judge will revisit the issue Friday.

“Next time I will request security be available to ensure that everyone is safe to participate in their right to peacefully assemble,” Brown said. “It’s sad that this has to be a concern at all.”

Councilmember Denlay did not respond to a request for comment.