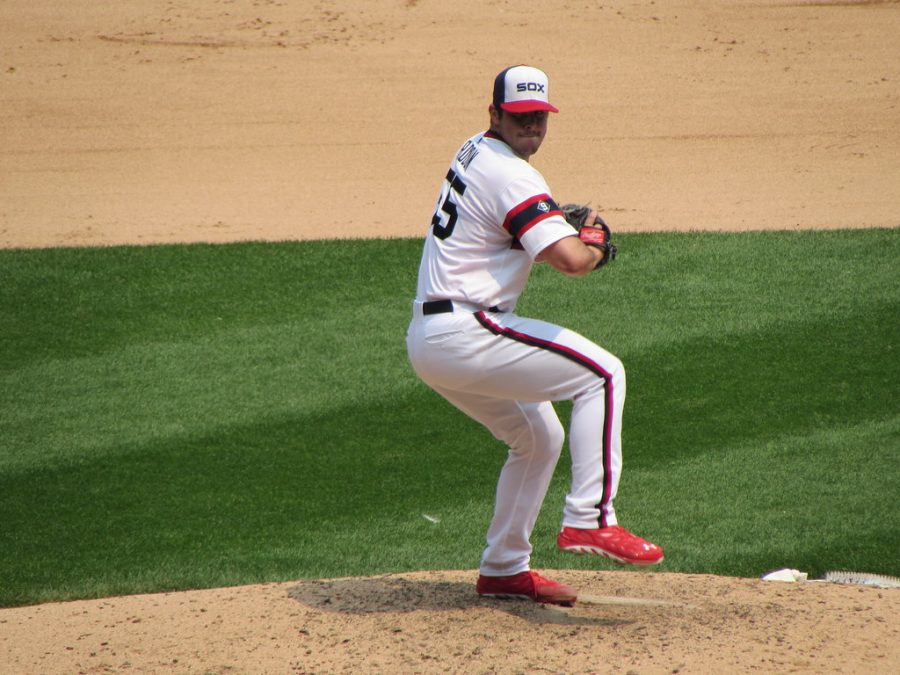 Carlos Rodon starts to head for home plate with his delivery.

On April 14, Chicago White Sox pitcher Carlos Rodon threw a no-hitter in an 8-0 victory over the Cleveland Indians. The no-hitter marks the first of his career for the 28 year old southpaw pitcher.

Chico State baseball players watching were impressed by the achievement Rodon was able to produce.

“Being a pitcher, a no-hitter is always an individual game goal going into a start, so they are always exciting to watch,” junior pitcher Josh Verdon said.

Rodon retired the first 25 batters of the game and found himself two outs away from a perfect game until he hit Indians’ catcher Roberto Perez. He then went on to retire the next two batters he faced to secure the no-hitter.

This achievement would have been hard to envision just a few months ago for Rodon. In December, he was non-tendered by the White Sox but signed a one-year, 3 million dollar free-agent deal in February.

“The no-hitter was nice to see,” Munoz said. “He threw very great throwing strikes and great tempo throughout the game.”

Rodon has worked tirelessly to reach this level of competition and get back to pitching for the White Sox. He had Tommy John surgery two seasons ago. He is very grateful to be back and pitching well for his team.

“It’s a pretty special moment,” said Rodon postgame. “Not many people can say they’ve thrown a no-hitter in Major League Baseball. We always talk about it, it seems like.”

This marked the second no-hitter thrown in the MLB this season, Joe Musgrove of the San Diego Padres threw the first just a week prior, and just another reminder that baseball is starting to look normal again. Chico State baseball players feel the same way.

“Overall, it’s better when it’s baseball season because there is so much more enjoyable TV to watch so I’m excited to watch the rest of the 162 game season and playoffs,” Verdon said.

While the MLB season has only just begun, the excitement level of players and fans remain at an all time high.

“Having baseball back is fantastic,” Munoz said. “It’s great to turn on the TV and know you can watch some ball.”

Jacob Milligan can be reached at [email protected] or @champ_milly8 on Twitter.