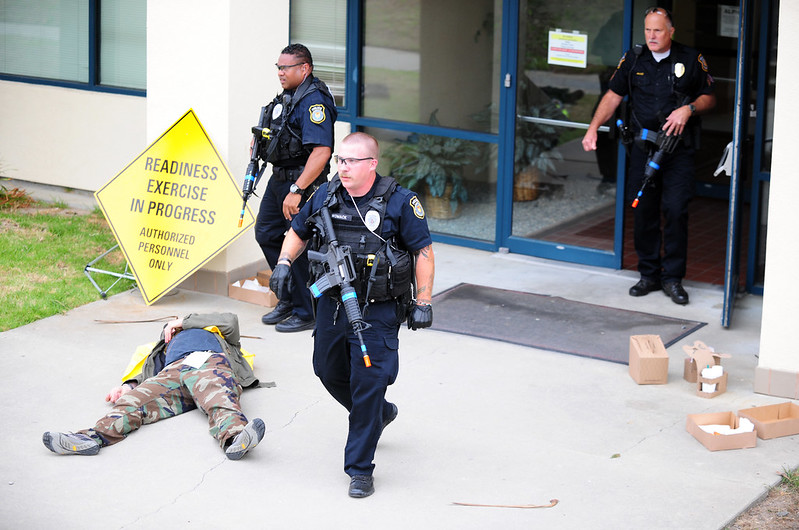 In the wake of national gun violence, people have become more weary and paranoid about shootings. California is known for its strict gun laws, however counties with less than 200,000 population allow residents to open carry guns.

No one has ever been arrested for shooting a gun on Chico State campus, according to all of the searchable University Police Department records and case reports, which go as far back as 1993. However, the last time someone was arrested for possessing a firearm near campus was March 23, according to Chico State Daily Crime Log.

“Gun violence on campus is a threat every campus needs to prepare for since there is not a system or strategy that has been proven to work 100% of the time,” University Police Commander Christopher Nicodemus said. “There are preventative strategies that can increase the chances of an attack being prevented.”

Run/Hide/Fight is an instructional video created by UPD. It gives students some lifesaving tips to follow in case an active shooting ever occurs on campus.

If an active shooter was ever to be loose on Chico State’s campus, university police have every right to subdue the perpetrator in order to protect the welfare of students, according to Assembly Bill 392.

Guns are prohibited on campus even if the person has a permit to carry a concealed weapon. However, written approval can be obtained from Chico State’s Police Department to carry a gun or to use it as a prop in a theatrical performance after speaking to the police commander.

University Police must identify as peace officers and warn that lethal force will be used. It can only be used if the officers believe the perpetrator will cause serious or lethal harm to others. Officers who exercise lethal force must submit a detailed report explaining the logistics of the situation, according to Senate Bill 230.

The open carry of guns is illegal in almost all of California, however some counties allow people to apply for a concealed carry weapons permit. This means permit holders can carry guns in their waistband and everywhere they go. However, they must complete gun training and a background check.

Not everyone can apply for a permit. Applicants must be 21 years old, must display a good moral character and can not: have a medical cannabis license, be a former convicted felon, have mental health issues. Although people can still obtain guns from de facto sources, this process helps mitigate the number of unstable people with guns.

Californians lost their right to open carry guns in January 2012 when Gov. Jerry Brown implemented stricter gun laws. People can get a misdemeanor for carrying an unloaded gun in public and even more trouble with a loaded gun.

People can not walk into a gun store and purchase a gun and then walk out with it. It takes a few weeks for buyers to receive their purchased guns, this gives sellers time to make sure the buyer has a permit and do a thorough background check.