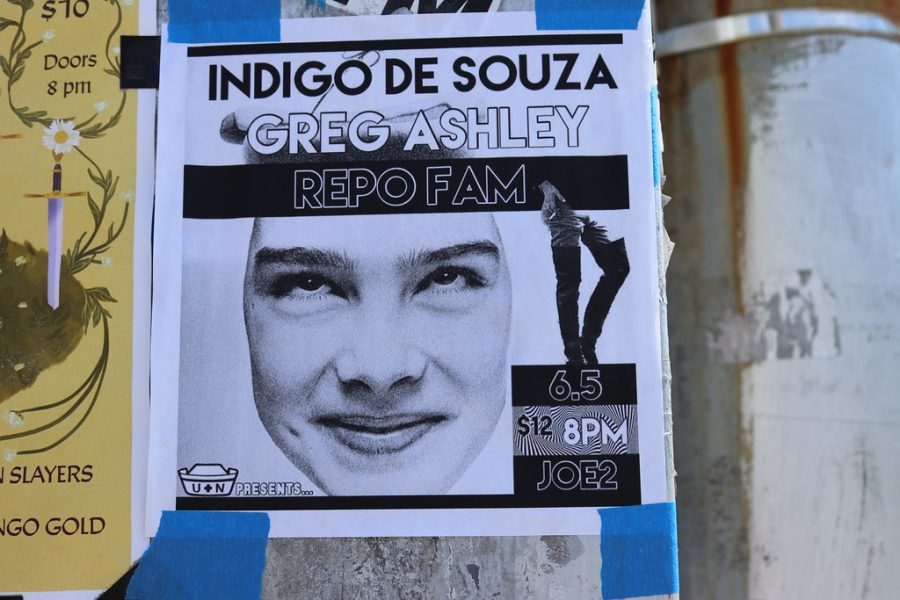 "26.Hampden.BaltimoreMD.31May2019" by Elvert Barnes is licensed with CC BY-SA 2.0. To view a copy of this license, visit https://creativecommons.org/licenses/by-sa/2.0/

She gathers the screams of her fans and adds them in the middle of a track. She takes risks, she thinks outside the box, she writes about heartbreak. It’s hard to describe Indigo De Souza’s music. She doesn’t fit the mold you would expect an underground indie artist to fill, she can’t be put in a specific genre. De Souza manages to fuse rock, indie and funk in her sophomore album “Any Shape You Take.”

The upbeat rhythm, layered vocals and lyrics that were made to sing or scream along with might be why this record is perfect for the summer. Listening to “Any Shape You Take” will make barbecues, picnics or sunsets with your friends feel like a movie.

Coming three years after De Souza’s first album,“I Love My Mom,” this hard-hitting heartbreak album proves to be a worthy follow-up, perfect for the end of summer. It’s easy to tell that De Souza does love her mom as her mom created the artwork for both albums.

De Souza’s records are similar in two ways. They are genuine and compelling. However, “I Love My Mom” has themes of loneliness and self-isolation, while “Any Shape You Take” takes on emotional misery and heartache. But, De Souza takes more risks and experiments with new sounds on this record.

“Any Shape You Take” begins with electropop-esque “17.” The lyrics will make you think of your first love and the connection you will always have with them. The song begins with,“Darling if you need me I’ll be right here,” and later reveals that her love is gone. The heartbreak due to the loss of someone familiar hits hard. De Souza’s claim to always be there for them invokes a special kind of nostalgia.

A similar feeling comes with the fourth song “Pretty Pictures” which describes an on-and-off relationship. “Pretty pictures on a screen, when I’m with you it feels like a dream,” and “Breaking up and getting back together,” outlines this. The type of relationship that De Souza chronicles is unhealthy with a special pull that makes you want to stay.

“Real Pain” is the climax of the album. Beginning with, “When pain is real/ You cannot run/ You cannot cover,” De Souza is open and raw with listeners. She tells her audience that there is no way to block out pain.

This track shows De Souza’s innovation as she adds the screams of fans in the middle to show two parts of the song. The first part is her declaration of love for a ghost and the pain she feels knowing that person is gone. The intense screams of people who love De Souza’s work are the high point of the album. The second half of the song is upbeat and contrasts her proclamations of frustration and her wanting to know that it is not her fault that person is gone.

The final track, “Kill Me,” has an ominous tone that contradicts the upbeat drums, heavy guitar and breathy vocals. As De Souza talks about a garden where magnolias bloom, she  pleads for her “darling, devil” to kill her. While the lyrics are dark, De Souza ends her record with, “I wasn’t having much fun.” The background music adds an end on a high note to the album, this leaves listeners feeling oddly satisfied. It’s relatable how De Souza does not hide that she is struggling, even as the guitar, drums and piano cover the pain she expresses with a more upbeat sound. It’s comforting for those who understand.

Carrington Power can be reached at [email protected]