Netflix’s ‘He’s All That’ encapsulates the zoomer romcom revival 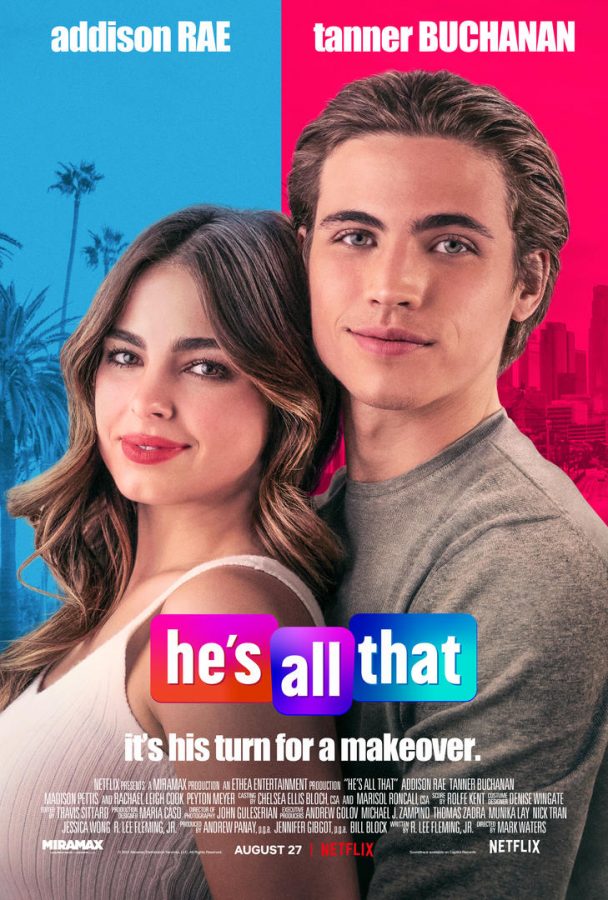 He's All That promotional poster, photo by Netflix

Mark Waters’ “He’s All That” began streaming on Netflix on Aug. 25, bringing in mixed reviews comparing it to the 1999 original, “She’s All That.” The attempt to modernize the film is ultimately what led to its demise.

“He’s All That” fell victim to the social media-heavy trope that directors think will lure in a younger audience. Unfortunately, rather than creating a factor of relatability, the constant status updates and screen shares on-screen were distracting and served as filler scenes.

The star-studded film features TikTok star Addison Rae and Tanner Buchanan, and pays homage to the original with a twist. The film follows Padgett Sawyer (Rae), a social media influencer in search of redemption following a humiliating fall from fame. In a desperate attempt to regain popularity, Rae accepts the challenge to give a mysterious outcast, Cameron Kweller (Buchanan), a makeover worthy of being crowned prom king.

With a cast ranging from seasoned actors all the way to debut acting performances, there was a present inconsistency during character interactions. Even cameos from Rachael Leigh Cook and Matthew Lillard from the original “She’s All That” weren’t enough to make up for these disparities. Waters, a teen comedy alum, was able to capture some of the quirkiness of the original film, but ultimately the gender-swapped remake fell flat.

In addition to it’s charming awkwardness, the original “She’s All That” emphasized its characters’ interests as being big plot points. Rather than having a popular, intellectual jock as the main protagonist, “He’s All That” has a chirpy social media star, an appropriate alternative for fostering popularity in a modern high school. However, other character revamps were not as smooth. Laney Boggs (Cook), the “loser” from the original film has a flair for the arts.

For the first half of the film, it appears as though Cameron Kweller (Buchanan) is going to have a similar taste for photography, even equipped with a camera when he is first introduced. As the movie progresses, it is revealed that he has a profound interest in horseback riding. The equestrian addition felt like a lame attempt to convince the audience that Kweller was an interesting character with many layers.

The film has individual success when it’s not being compared to the original film. Rae’s debut performance was commendable and the chemistry between the characters felt somewhat authentic. Celebrity cameos like Kourtney Kardashian felt like a nod to the audience, though it added no substance to the movie.

Overall, “He’s All That” could serve as a nostalgic tool for long-time fans, as it is riddled with references to the original film. For younger fans, however, it’ll likely just fall into the Netflix abyss of unrealistic romcoms starring current celebrities that you watch once and never think about again.

Maricarmen Becerra-Gonzalez can be reached at [email protected]