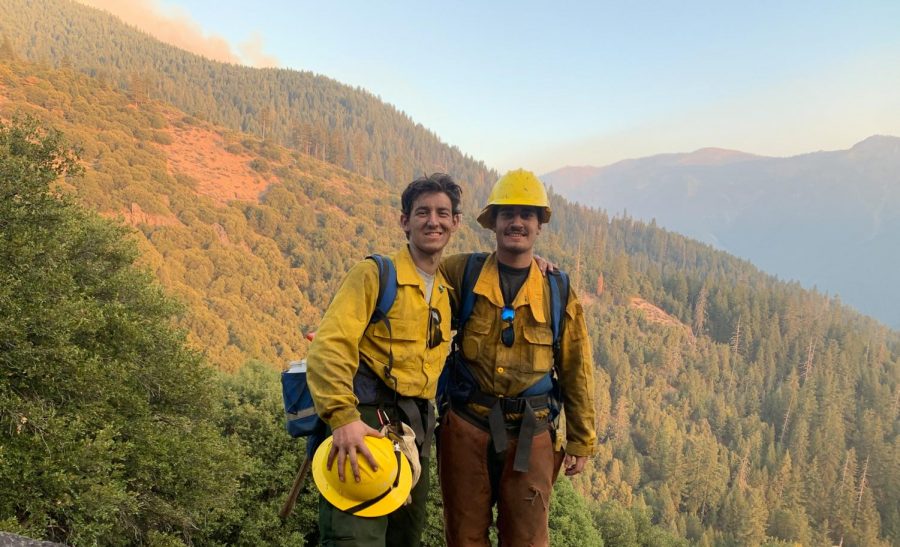 The 2021 wildfire season has hit Northern California hard. The Dixie Fire, which began in Butte County, has burned irreplaceable parts of Lassen Volcanic National Park and Lake Almanor. The fire has also made history as the first fire to burn across the Sierra Nevada.

Matthew Myrtakis and Jacob Sani, two Chico State juniors and newly certified firefighters, have been fighting back. The two students spent 14 days on-call in Plumas National Forest fighting the fire. Myrtakis and Sani, along with their crew of 13 newly-certified firefighters, spent 16 hours per day clearing brush, digging trenches and removing anything the fire could use as fuel, a process referred to as “cutting line.”

“It’s definitely the hardest work I’ve ever done in my life,” Sani said.

Hiking through hills with roughly 80 pounds of gear on their backs, Myrtakis, Sani and the rest of their crew routinely cut fire lines. They were regularly exposed to giant flames, toxic smoke and dangerous ash.

“The conditions were terrible,” Myrtakis said. “A lot of seasoned firefighters, some of whom have been in the service for more than 30 years, said those were the worst conditions they’ve ever seen.”

The hard physical labor the crew endured was necessary for getting the fire under control.

One day, as they worked a portion of the ridge, the fire advanced in their direction. The crew called in a helicopter that dropped 600 gallons of water on the flames near their position.

Despite being newly certified, Sani has had experience with other infernos. A Sonoma County native, Sani was in his hometown of Cazadero in 2020 when the August Complex forced him to evacuate.

“That’s sort of what got me into fire,” Sani said. “My house almost burned down last year, and I couldn’t do anything about it.”

The fire never reached Sani’s home, but some of his crewmates weren’t so lucky. Two of them lost their homes to the Dixie Fire. The town of Greenville was destroyed, along with many homes and neighborhoods.

Myrtakis recalled passing through Greenville after cutting fire lines and said the destruction of Greenville reminded him of Paradise after the 2018 Camp Fire.

The Dixie fire, which has burned for over two months now, is the second-largest wildfire in California history. According to Cal Fire, it’s now 86% contained and has burned more than 960,000 acres.

Even though the worst of the Dixie fire may be waning, fire season is far from over. More resources will be needed to fight future fires, something of which Sani and Myrtakis will be a part of.

“I needed to get out there and make a difference,” Sani said.

For those interested in a firefighting career, Butte College’s Fire Academy is one place to start. The 20-week-long course is challenging and requires commitment and focus. Sanfilippo said upon completion of the training, applicants will have the skills and certifications they need to find a job in the fire industry .

“It’s a serious issue right now, and we need the help,” Myrtakis says.

Noah Herbst can be reached at [email protected]

Correction: This article has been updated to correct two inadvertent errors of fact provided by Crewboss Matt Meyerl. His title has been updated to crewboss, not captain. In addition, The Orion corrected an inaccuracy: Crewboss Matt Meyerl did not call in the helicopter. According to Meyerl, the helicopter was called in by “Steve Ocampo with Trainee Nick Steal.”