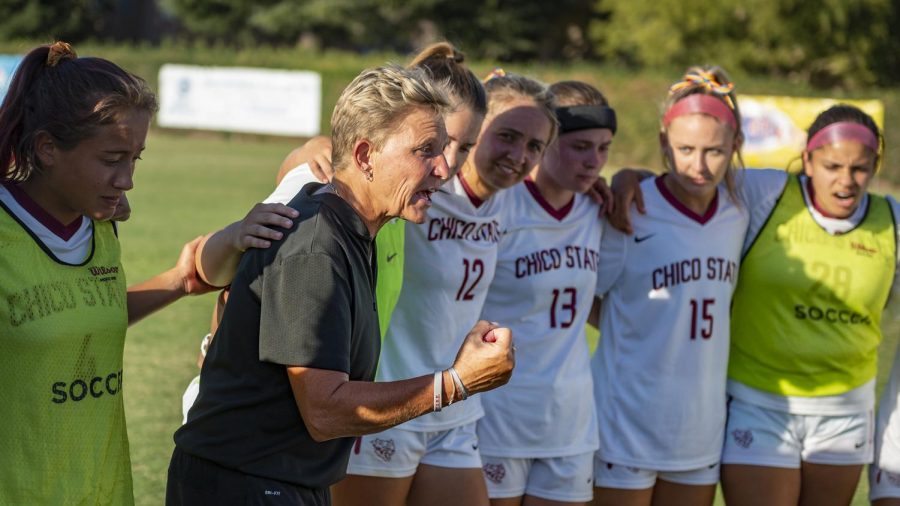 Chico State Wildcats head coach Kim Sutton (center) encourages the team against Dominican Penguins during the second half of their women's soccer game on Thursday, September 12, 2019 in Chico, Calif.

Chico State Women’s Soccer got a taste of conference play in their final preseason match. A late goal from Humboldt State tied the game and resulted in a 1-1 draw.

A victory on Saturday would have given coach Kim Sutton her 250th win. With a home game on Friday, the Wildcats have a chance to give Sutton a landmark win in front of the home crowd.

“Friday night is so important. We want to start off strong and hit the ground running,” junior captain Susanna Garcia said. “We’ve been preparing for this all preseason long.”

Chico State and Humboldt State have a long-standing rivalry, and for the first time the two teams faced off prior to their regularly scheduled conference game.

Senior captain Kylie Martinez said this new schedule is beneficial for the younger players getting acclimated to the California Collegiate Athletic Association.

“With having a young team, the new format is helpful to give everyone a real taste of what CCAA will look like,” Martinez said. “Everyone is good, we’re growing from every game and ready to take on the conference.”

The pressures of playing games have consequences and Martinez knows this team’s play can transfer into the season.

“I’m so confident in this team, I know our play will carry over into these important games,” Martinez said. “The overall team bond, energy and talent this year is special and will take us lengths.”

“I think at this point, as I’m older, almost every game has a type of rivalry,” Emigh said. “Whether it be a rematch from last season or a specific player you want to beat, or the team as a whole.”

Ending preseason with a 4-1-1 record is the good start the Wildcats hoped for, but as the CCAA approaches, every team’s record begins the same. Garcia said the team can’t let their guard down.

“There’s no time to get complacent. Now is the time we must focus up,” Garcia said.

A home game is the perfect opportunity to start off strong.

“We can get the ball rolling and show ourselves and the rest of the conference the incredible things we are capable of as a team,” Emigh said. “It makes it so much sweeter to be back on our home pitch.”

The no. 25 ranked Wildcats open up CCAA matches against Cal State San Bernardino on Friday at 7 p.m.