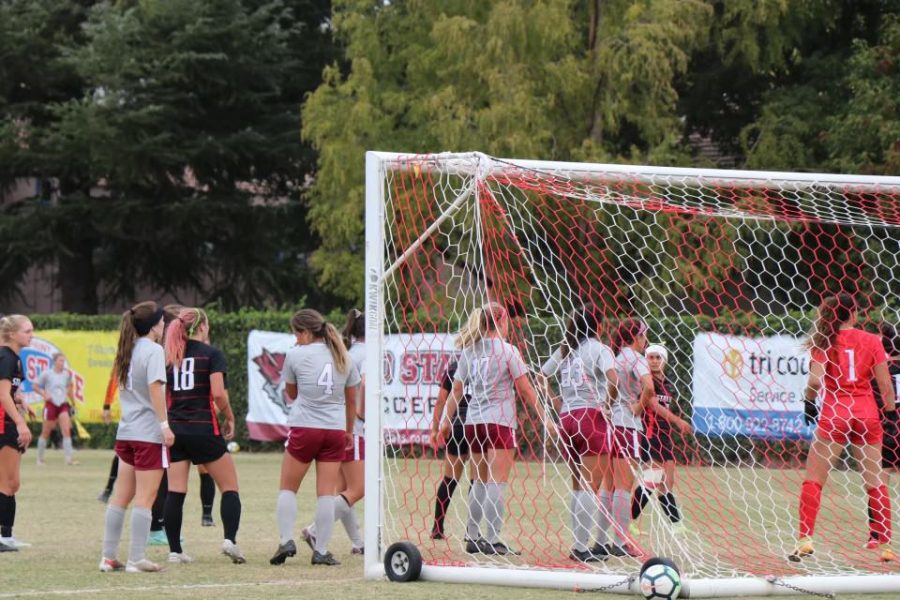 Wildcats awaiting the corner in the box.

The Chico State’s Women’s Soccer team got a 1-0 victory Thursday night against the Cal State East Bay Pioneers with the only goal coming late in the second half.

The standings in the California Collegiate Athletic Association conference are shaping up and three teams: Chico State, San Francisco State and Cal State East Bay are all within two points of one another to claim second place. Winning against one of those three teams on Thursday was a must.

The lone scorer of the night was junior forward Antonia Diaz. Scoring in the 80th minute, she secured a win and her first career goal as a Wildcat. One that she has been wanting for quite some time. Diaz earned herself a Player of the Game award with her play.

“It was a little shocking at first, just because I was alone in the box,” Diaz said, “but as soon as Sanna [Garcia] ran toward me cheering I got super excited. I’ve been wanting one for awhile ever since getting switched to forward so it felt very rewarding.”

Diaz’s goal was credited to her follow-up after a shot from midfielder Camille Lidster bounced off the crossbar. Every defender on the Pioneers and attacker on Chico watched as the ball was in the air.

However, Diaz continued through the entire play. She jokingly acknowledged that Lidster tends to hit the crossbar often with her shots in practice so she knew where to be just in case.

“When I saw her shoot the ball, I kept running to follow it just in case and it happened exactly that way,” Diaz said. “It is also embedded in my brain, Coach’s words ‘follow through,’ so whether she said it or not, I’m not too sure, but I heard it.”

Also receiving a Player of the Game award from Thursday was sophomore defender Alexi Vontsolos. Some games, Vontsolos plays major minutes for her team. She said it is all about staying ready and knowing your role.

“I try to remind myself how each and every player’s role on this team is so important,” Vontsolos said. “Some may be playing in every single game and some may not, but each player has an opportunity to come off the bench and make a difference when needed.”

Vontsolos has been a huge part of their success all season long. She said that she reminds herself if and when the time comes, she is always capable of making a difference.

Another player for the Wildcats who has begun to see the field early in her collegiate career is freshman defender Audriana Templeman.

Much like her teammates who are getting a feel for college play each game, Templeman said it has been a great experience playing with a team who’s set the bar high.

“So far it’s been amazing, being on a team that is driven to be successful motivates me to take every opportunity to improve,” Templeman said. “My teammates keep me competitive and motivated.”

Despite this being her first year playing, she has played meaningful minutes for her team. Templeman said she knows that she has to be mentally and physically ready in order to keep that trust.

“I am always looking forward to stepping on the field no matter how often it happens or how many minutes it is for,” Templeman said. “It’s comforting to know that Coach trusts me in these moments.”

The Wildcats have six more conference games and currently sit in fourth place. They will face off against the first and third place teams and will have an opportunity to move up in the standings.

Mason Tovani can be reached at [email protected] or @masonmtovani on Twitter.