Hey, did you know I’m vegan? 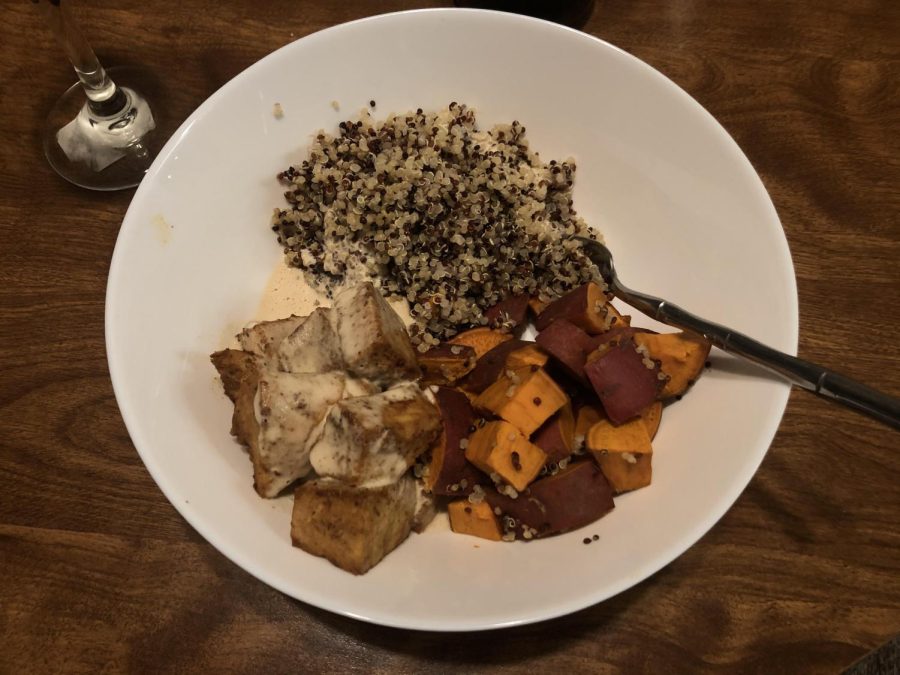 A bowl of quinoa, sweet potato, and tofu. One of the many meals Thomas enjoys since going vegan.

To this day, few things give me more joy than derailing conversations to remind people of my veganism. It’s easy to poke fun at myself, but there are few subjects that genuinely fascinate me as much as veganism and the philosophy behind it. I made the switch around May of 2019, and my passion for the movement never waned.

Before completely cutting out animal products, I made a step in the right direction, and became a vegetarian on New Year’s Day 2018. It’s odd reminiscing about my vegetarian days, because while I was strict about it, I don’t recall ever feeling much pride or passion about it. I didn’t discover anything I didn’t already know. I just kinda … did it.

For about a year, I went about my days, not paying much attention  to my diet. As time passed, I noticed the minimal animal products present in my groceries. I kept my shredded cheese and sour cream for my burritos, but nothing more.

Suddenly, the prospect of veganism staked its claim in my mind and never left. Pro- and anti-vegan YouTube videos consumed my free time. I’d walk to and from class with them playing in my headphones as I walked down the street, and I’d play them while I did homework.

Not only was I fascinated by the subject, but I knew if I was making the switch, my side had to be logically sound and consistent. One argument that had stumped me was that if we stopped consuming animal products, there would be nowhere for the animals to go.

Looking back, it’s embarrassing that I was ever caught up on this point. The reality is that we don’t live in a world where this would ever happen, so it’s a completely null argument to make. It’s going to be a gradual process where the amount of animals being raised will gradually decrease.

I bring this up not only to debunk that particular argument, but to demonstrate how easily people will justify their own actions or dismiss certain points they hear. I listened to people arguing about veganism, because I wanted to extinguish any hint of doubt I had in the movement.

With every argument or debate I listened to, it was undeniable that I was going to make the transition to veganism — it was only a matter of when.

At the end of the Spring 2019 semester, I told myself that when we came back in the fall, that’s when I would make the switch. Honestly though, I couldn’t wait. It might sound weird considering so many people see veganism as a massive sacrifice, but I was excited to jump headfirst into this new chapter of my life.

This is another moment in my life where I look back and think, “Why the hell did I tell myself I was going to wait?” On some level, it stemmed from insecurity. But in my head, the cause was so dire, and the consequences of my actions were so horrific that I had no choice, even if it meant off-color jokes from onlookers.

With two and a half years of experience under my belt, I feel confident in saying that veganism will stay with me for the rest of my life. There are few things — if anything — that I am more sure of. Aside from the occasional inconvenience, I have everything to gain, and nothing to lose from it, with my only regret being that I didn’t make the switch sooner in my life.

Thomas Stremfel can be reached at [email protected] or @tomstremfel on Twitter.