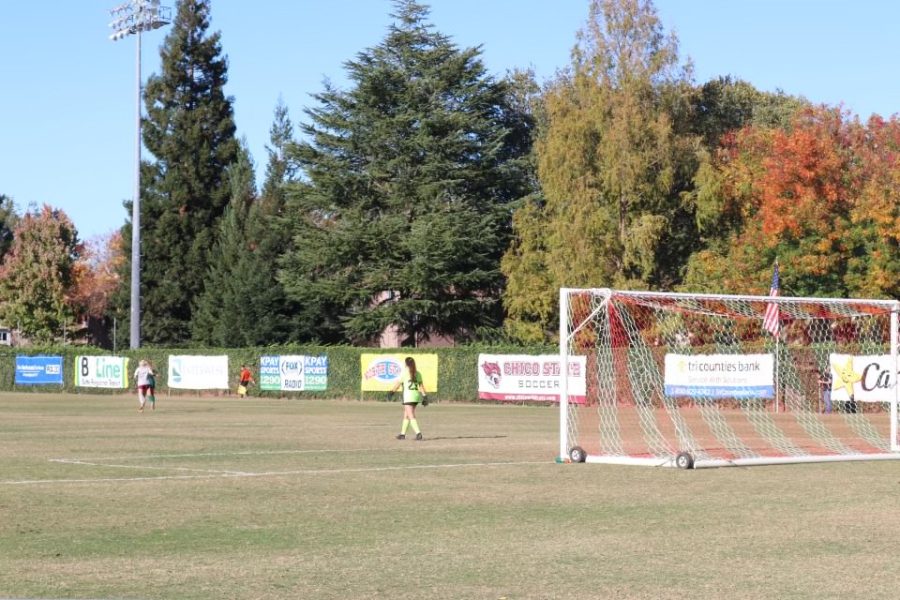 After a strong weekend, the Chico State Women’s Soccer team’s two victories and one tie, earned them a second seed in the California Collegiate Athletic Association conference and a first round bye in the playoffs. This bye gives them an automatic spot in the semifinals.

The team will travel to Pomona where the tournament will be held. Before the Wildcat’s final game against Humboldt State, freshman goalkeeper Emma Hofmann had a streak of seven shutouts in a row and showed some late-game heroics in regular time and overtime. She is just one reason for the Wildcats’ strong finish.

Hofmann says the shutouts are a huge credit to her defensive line.

“To get seven shutouts in a row during conference was never something that I thought I could accomplish,” Hofmann said. “I am so proud of the defensive line for all the hard work we have put in as a team.”

Hofmann said that her confidence in her abilities to protect the goal has grown immensely, especially in the match against Cal Poly Pomona Broncos. She plans to keep the ball out of the net when the playoffs begin .

Like some of her teammates, this is Hofmann’s first time in the playoff tournament. That confidence she spoke about hasn’t wavered even with the team playing on a bigger stage.

“Personally, I am not nervous for the conference tournament,” Hofmann said. “I tend to succeed when I am under pressure so thinking about the playoffs makes me super excited. I trust my team and all of the hard work we have put in all season to get to this point.”

With a bye week, the Wildcats will be able to rest. Senior midfielder Sarah Emigh knows how important that time off is.

“Having over a week’s rest is going to be great for recovery but also extra time to prepare for the weekend to hopefully bring the banner back home,” Emigh said.

Even if the conference tournament doesn’t go their way, the chances of them making it to the National Collegiate Athletic Association DII tournament are strong because of their rank and overall record.

Emigh says the team has worked all season to get on the same page of how significant and difficult it can be to be where they are at.

“Because we are such a young team a lot of people don’t fully understand the significance of the NCAA,” Emigh said, “so we’ve also really tried to get the mentality that it is time to get there and be a playoff team.”

Despite falling short of a first seed in the conference, sophomore forward Madison Parsons says closing the season strong with a 4-1 win against Humboldt State, two goals of which came from Parsons, this team has the energy to find success in the playoffs.

Much like her teammates, Parsons is confident in the team’s drive to achieve what they set out to do.

“We are excited to continue this season and I know everyone on this team will continue to work hard and give it our all until the end,” Parsons said.

The Wildcats will play the Cal State East Bay Pioneers in the semifinals. From there, the winner will play in the finals, against either the Sonoma State Seawolves or the Cal State L.A. Golden Eagles. The Wildcats beat East Bay earlier this season in conference play and have a shot to beat them again.

Mason Tovani can be reached at [email protected] or @masonmtovani on Twitter.