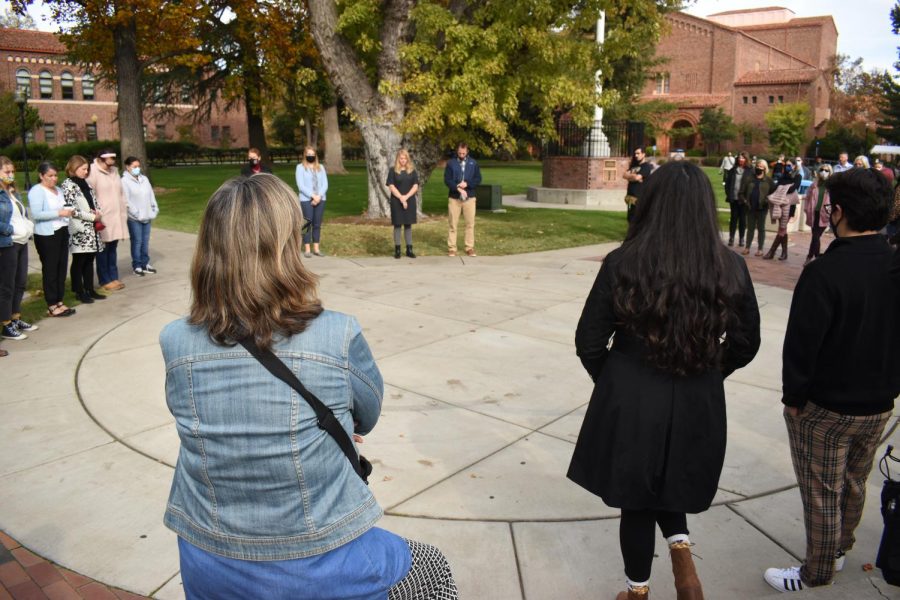 A crowd was gathered in front of Kendall Hall for a moment of silence to remember the Camp Fire on Nov. 8.

For 85 seconds, Chico State held a moment of silence in front of Kendall Hall to honor the lives lost during the Camp Fire, which leveled Paradise exactly three years ago and became the state’s deadliest wildfire.

“The Camp Fire has changed our lives and our community forever,” President Gayle Hutchinson wrote in an email to students, faculty and staff. “Although the fire left destruction, trauma, and upheaval in its path, the acts of bravery, kindness, and support seen in the months and years that followed speak volumes about the strength of our community.”

Megan Kurtz, Chico State’s director of Off-Campus Student Services and Regional Recovery Liaison, shared memories of the Camp Fire and the aftermath she experienced in front of a crowd of over 30.

“The way that this campus came together and really rallied around what it meant to support each other through a disaster, we knew in our gut that we were really ‘Butte Strong’ before we even had the words to say something that has resonated in our community,” Kurtz said.

Kate Scowsmith worked with clients at Home and Health Care Management as a social worker after graduating from Chico State in 2017. Scowsmith recalled the fire burning down nursing facilities and leaving her clients displaced, immediately.

“My work quickly transitioned to disaster relief and case management versus what I was already doing,” Scowsmith said.

Flags were lined across Skyway to remember the 85 people who lost their lives three years ago during the Camp Fire on Nov. 8. Photo by Kimberly Morales

“I think it parallels the grieving process,” Scowsmith said. “It takes one to three years for shock to wear off after a disaster. And so for a lot of survivors, they’re just coming to a place where they can receive help. So I’m very proud that we still have an intake process that’s open that can get them connected to help.”

Kurtz said a majority of the assistance in the rebuild has been local, stemming from donors and agencies.

“After year one, the government agencies leave and it’s up to the community to rebuild,” Kurtz said. “Because of this fire, there’s new systems in place and we’re in a position to be supportive and mentors to other long-term recovery groups.”

The ridge continues to rebuild and heal three years following the fires.

“Recovery is an interesting word because it insinuates that you are going to get back to something but there’s no going back. It’s new,” Kurtz said.

Kimberly Morales can be reached at [email protected] or on Twitter @kimberlymnews.