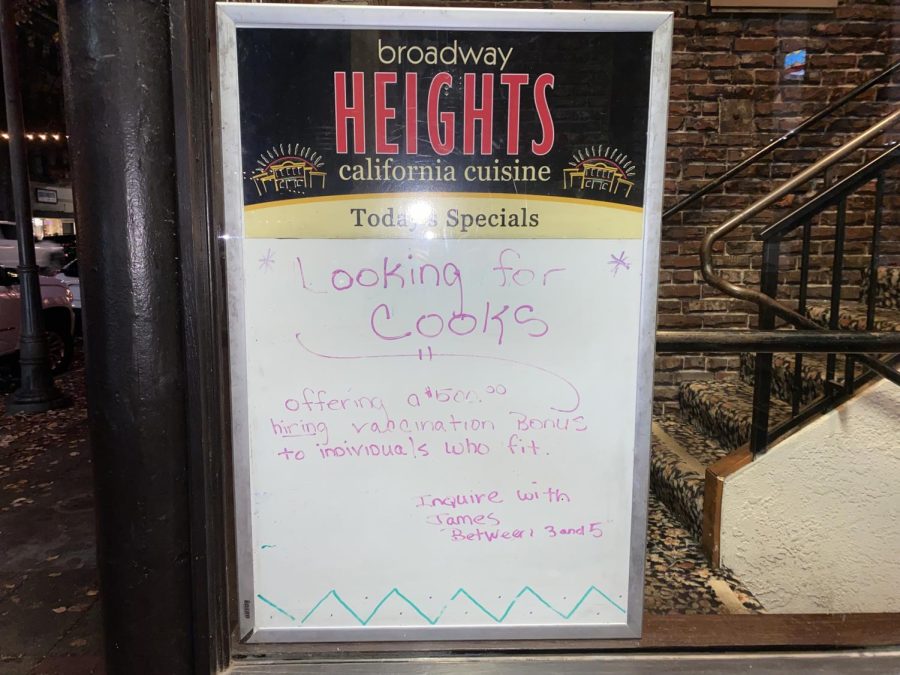 Businesses are desperate for employees. Broadway Heights in Chico is going as far as offering a vaccination bonus for new hires.

Businesses throughout Chico are struggling to keep employment. Some are shortening their business hours, others are even offering hiring bonuses.

The labor shortage, however, is not unique to the city of Chico. While scrolling through Twitter late one night, I came across a picture of a sign in front of a business that read: “We are short-staffed. No one wants to work anymore.” 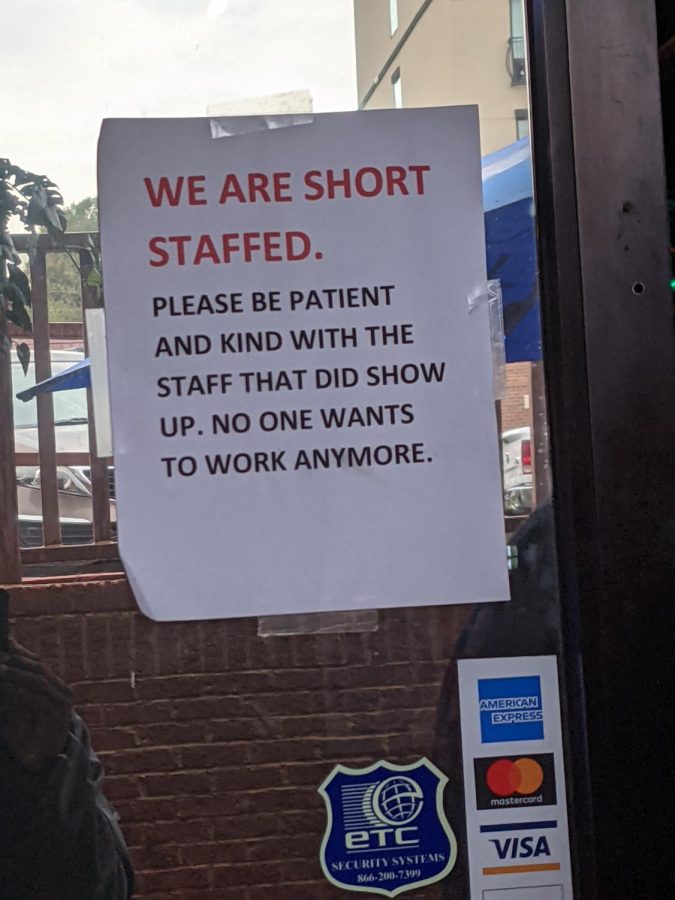 One of many signs being posted as businesses struggle to keep employment. Taken from r/antiwork subreddit.

The picture was originally posted on an anti-work subreddit appropriately titled: “r/antiwork: Unemployment for all, not just the rich!”

The subreddit has seen exponential growth over the past two years and now garners over a million members. Most of the growth coincided with the record-breaking number of Americans who quit their jobs between April and August of this year, according to an economic news release from the U.S. Bureau of Labor Statistics.

I’m no economist, but the reasons seem simple, and it’s not what people think. We know there are jobs available; the signs in front of businesses and the shorter business hours due to lack of employees corroborates this. Why, then, are so many Americans quitting their jobs?

This is simply not true. A 2020 news report from Yale economists found no evidence that the more generous unemployment benefits during the pandemic reduced employment.

It’s not that people don’t want to work. Rather, they’d prefer to be self-employed or find work where they are appreciated and offered benefits like healthcare, flexibility, lower hours and higher pay.

People don’t want to fall victim to the vicious cycle of wage slavery in which an individual is unable to escape a low paying job with little chance of economic mobility.

The COVID-19 pandemic forced workers to take into serious consideration the type of life they want to build. A 40-hour workweek at a minimum wage job is, and has always been, absurd. Such a lifestyle robs people of precious time they will never get back.

It’s incredibly difficult to work a 9-5 all while cooking healthy meals, taking care of your mental health, exercising regularly, sleeping 6-8 hours a day and spending time with family and friends.

Workers are simply burned out and are realizing that a system in which their labor barely helps them survive but puts more money in the pockets of CEOs than they know what to do with is a broken system.

This does not mean that capitalism is broken. The opposite is true. Capitalism is actually flourishing and working exactly as intended.

Exploitation and extreme inequality aren’t simply curable symptoms of capitalism, they’re the very foundation on which capitalism is built. Both are necessary features of capitalism. This system by its very nature concentrates money to a select few by exploiting the many. It rewards corporations for maximizing profit even if this leads to low wages and poor working conditions.

Of course, a complete overhaul of our economic system is certainly not on tomorrow’s agenda, but employers should take the current labor shortage as an opportunity to do better. Unfortunately, their current reactions to the labor shortage is illustrative of an insensitive regard for employees as a mere means to their own profit-driven end.

When I see a sign in front of a business stating that “no one wants to work anymore,” what they are actually communicating is that their job is so terrible that people would rather take a chance and explore other options.

The pandemic has shown that change is possible. Businesses will be fine if they accommodate the needs of their workers. Whether providing an option to work remotely or allowing workers to leave in the middle of the day to pick their kids up from school, offering flexibility in the workplace demonstrates a basic level of respect for workers by acknowledging that their life outside of work is meaningful and worthy of consideration.

Businesses will not crumble if they offer safer working conditions, flexible hours, higher wages and shorter work weeks. In fact, shorter workweeks appeared to boost productivity in Iceland, according to an NPR study.

Instead of blaming the labor shortage on laziness, perhaps it may be better to reflect on what it is that people want out of their lives. You may find that a 9-5 grindfest is not on most people’s wish lists.

Aldo Perez can be reached at [email protected] or @Aldo_Perez on Twitter.