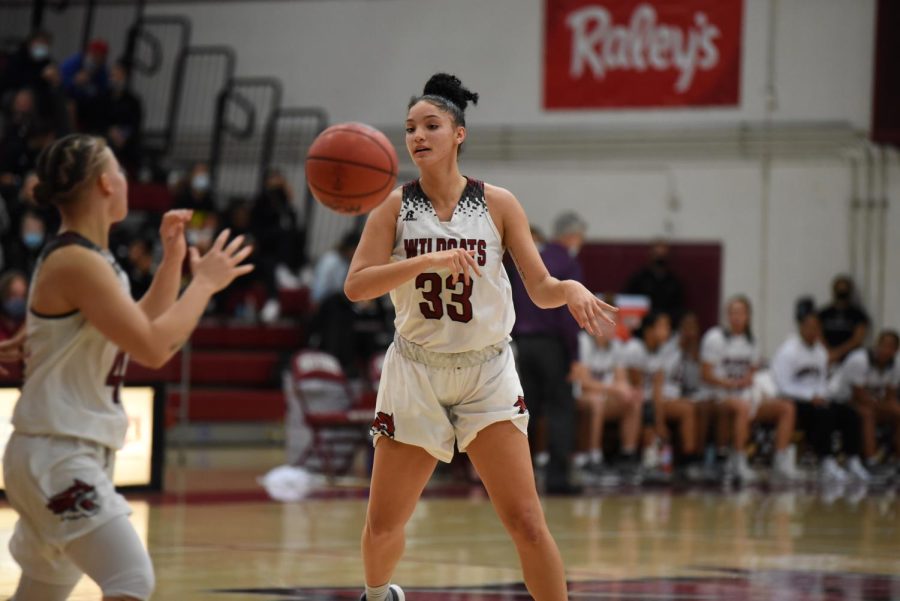 Jordan Morris passing the ball to her teammate Charity Gallegos.

The Chico State Women’s Basketball team traveled to Coussoulis Arena in San Bernardino on Dec. 2 to face off against Cal State San Bernardino, in which they lost 59-62.

This marked the fourth consecutive loss for Chico and put them at an overall record of 3-4.

Once the matchup started, the offense for both teams was slow in the first quarter.

However, things began to pick up when India Starr and Morgan Mathis came off the bench and checked in with 2:12 min remaining in the first quarter.

Starr drained a 3-pointer after only eight seconds of checking into the game and Mathis quickly followed with a 3-pointer of her own, making the score 19-11 to end the first quarter.

“It’s always important just for us to be able to get those couple points right when we get in,” Starr said.

Once the second quarter was underway, Mathis fired off another 3-pointer to add to the lead making it 22-11.

Later on, the Wildcats began to encounter a dry spell on offense. With back-to-back turnovers by Chico, The Wildcats made 10 trips to the basket and were unable to come up with any points.

The Coyotes went on a 9-0 run and cut Chico’s lead of 11 points until San Bernardino had the lead at halftime.

The Wildcats made three out of 16 shots, shooting for 18.75% in the second quarter. Only eight points were scored in total and six of them were two 3-pointers by Mathis.

The score was 27-29 going into the third quarter and the Wildcats made some halftime adjustments.

Chico went on a 9-0 run of their own and the score was 40-30, thanks to a 3-pointer by Myli Martinez and players like Bailey Jones, Charity Gallegos and Makenzi Laporte attacking the paint.

Jordan Morris scored her first points in the second half, but she played a pivotal role grabbing rebounds throughout the game. Morris finished the game with a double-double, scoring 10 points along with 12 rebounds.

Despite Chico having a successful third quarter, shooting for 40% in field goals, San Bernardino was clawing back themselves.

Late in the third quarter, San Bernardino’s Samantha Henely scored the third 3-pointer of the game for the Coyotes and cut Chico’s lead to 44-40.

Chico proceeded to commit two turnovers in a row, one coming off of a bad pass and the other from a traveling violation by Morris.

The Wildcats finished strong with Morris scoring two free throws to end the third quarter, giving the Wildcats a lead of five points and a score of 47-42.

In the final quarter, the Wildcats held onto the lead until 5:52 minutes remained.

Mia Dufresne scored a jumper for the Coyotes to make the score 50-51 and put Chico behind by one point.

Morris would go on to score the last points for the Wildcats in the paint. San Bernandino’s Destiny Jackson got fouled and made both free throws to take the lead.

With the score being 59-62, the Wildcats got a final look by Jones for a 3-pointer, but the shot was unable to go down.

This was the Wildcats’ third game of the season that they’ve lost by four points or less.

Stat leaders in this game included Martinez with 10 points, Morris with 12 rebounds and Gallegos with five assists.

Chico State continued their play on the road against the Cal Poly Pomona Broncos on Dec. 4.

The Wildcats knew the importance of snapping the four-game losing streak against the Broncos.

“It’ll be a huge confidence booster, especially going into next weekend for our home game,” Morris said.

After another wild finish, the Wildcats were able to get the win against the Broncos, 67-63.

“No matter what, win, lose or tie,” Martinez said, “we stick together and always keep fighting.”

The Wildcats will be back at Acker Gym on Dec. 11 to play against the Sonoma State Seawolves at 5:30 p.m.

Raymundo Sayago can be reached at [email protected] or @rsayagoaguilar on Twitter.