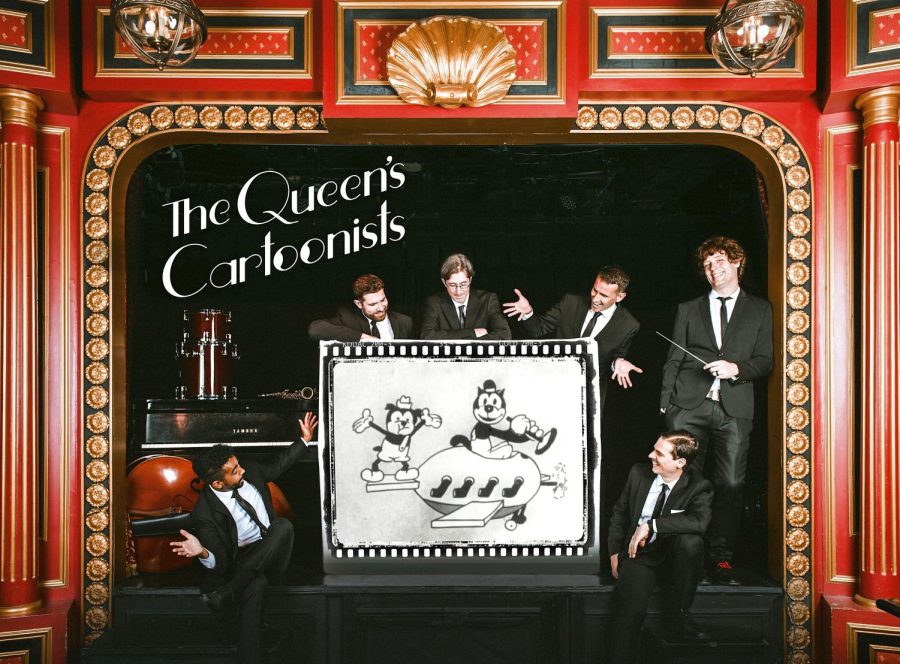 The Queen’s Cartoonists performed at Laxson Auditorium on Feb. 3. The jazz sextet’s set consisted of original material and scores to classic cartoons, like Looney Tunes and Betty Boop, that played in the background as the band played as animatedly as the cartoons themselves.

Laxson Auditorium, far from full capacity, attracted a healthy audience that consisted mainly of older couples and families with children.

Keeping up with the theme of cartoonish shenanigans, the show began when a man dressed as a red “Start Button” made his way onto stage. He was followed by a foam finger on a long pole, drawing laughs from the crowd. Once the two made contact, the show began.

The screen behind the band lit up with a familiar face, Popeye the Sailor Man. For their first song, the band would play the score for a part of the 1936 short-film, “Popeye the Sailor meets Sinbad the Sailor.” The cheerful, rapid jazz playing wowed the crowd as it synced perfectly with Popeye and his crew’s actions.

After a quick introduction from the band’s pianist, Joel Pierson, the band jumped into their next song, the score from a Porky Pig cartoon. Porky’s misadventures on screen attracted some attention, but most of the audience focused on the band, which had incorporated a ukulele and kazoos into the mix.

Once the screen went black, the modestly sized audience gave an overwhelming round of applause to the “Multi-Instrumental Mayhem” they had just witnessed.

The band played two more melodic albeit comedic performances. One of the performances was accompanied by a black-and-white short film titled “Bambi Meets Godzilla.” The second performance, which was more than double the length of the former, centered around Charlie Chaplin’s “Charlie on the Farm,” a short film that combined live-action and animation.

Following these two songs, Pierson said the horn players would have a chance to perform difficult solos. 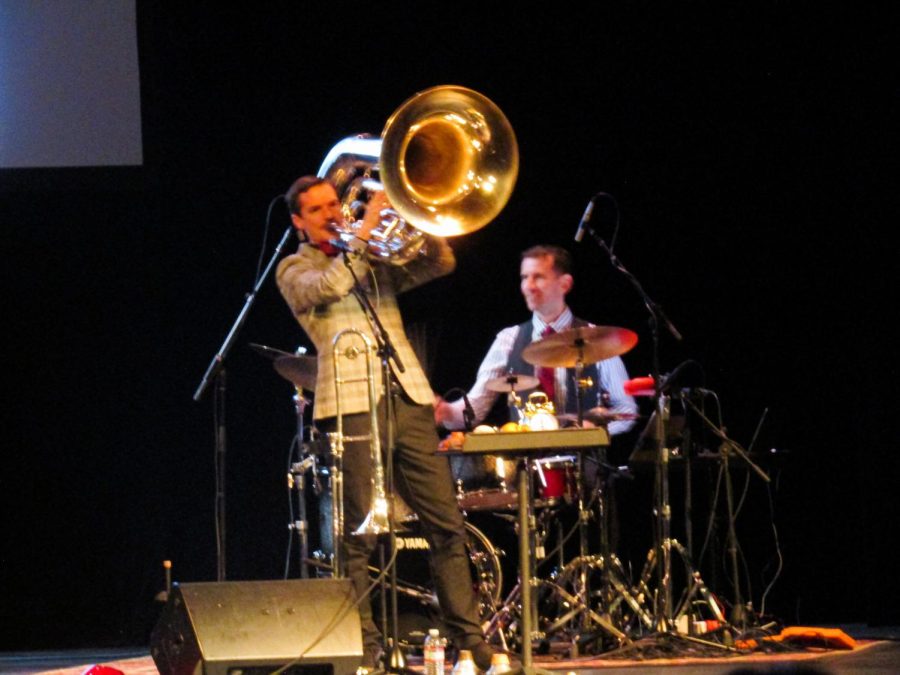 Greg Hammontree plays the tuba with Rossen Nedelchev playing the drums behind him. Photo taken Feb. 3, by Noah Herbst

The solos were part of an original song titled “The Horns Blow,” which drew chuckles from the crowd. What started as a normal song quickly became a display of the musicians’ talents. Multi-instrumentalist Greg Hammontree discarded his trumpet for the solo and somehow managed to turn a regular table straw into a functioning instrument.

He was superseded by Mark Philips, who asked a fellow band member to hold his saxophone while he solved a Rubik’s Cube and simultaneously played his flawless solo.

The band proved they could play more than fast-paced jazz. They played Tango music from a 2010 short film, “Sauna Tango,” and the pace slowed down with a somber, haunting classical piece, intensified by the melancholic, Soviet-produced, Cold War-era short film, “Hedgehog in the Fog.”

For their last song of Act One, the band played the original composition of a Woody Woodpecker cartoon. The cartoon featured beautiful watercolor style animation, and the slapstick hyperviolence of the iconic woodpecker drew laughs from the crowd. 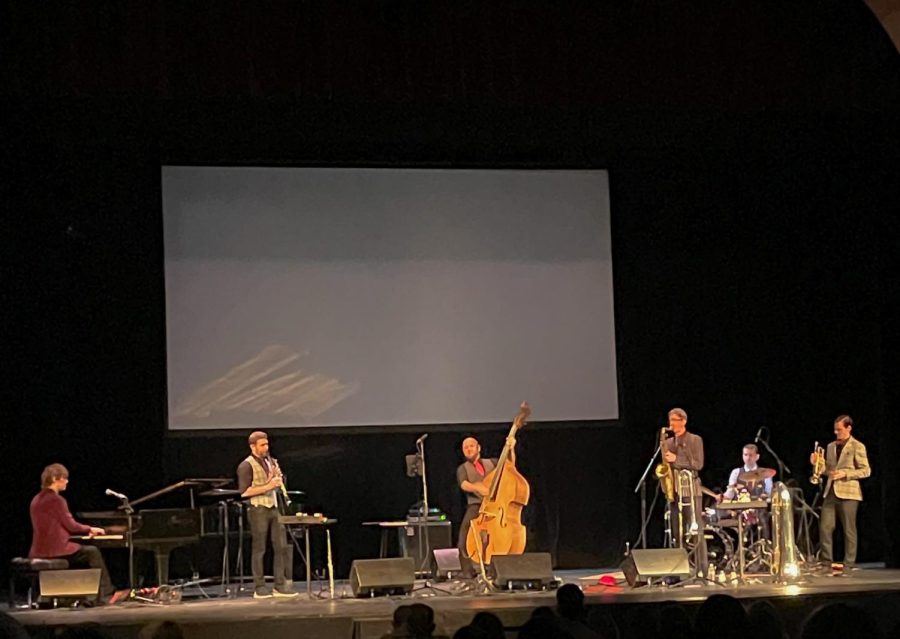 The Queen’s Cartoonists onstage at Laxson 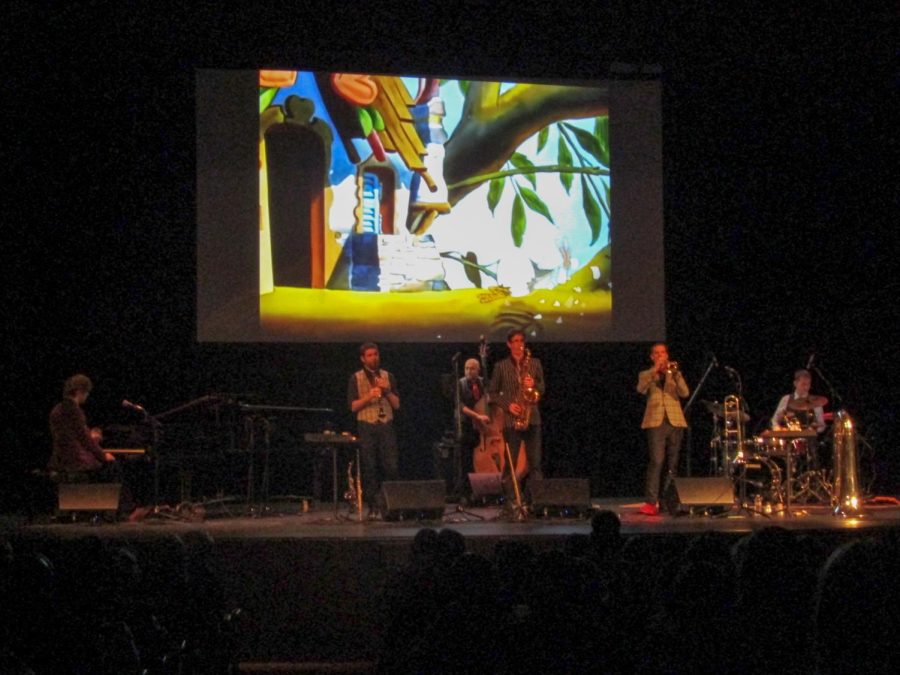 After a 15-minute intermission, the band returned with a dedication.

“This next one is for all of the lovers of classic music and seafood,” Pierson said.

For the next several minutes, the audience was in hysterics as the band played operatic music to accompany a unique, stop-motion film about a singing fish and its trip from the fish market to the kitchen counter.

The band would go onto play some more jazzy, comedy-laden pieces that accompanied cartoon characters from the Golden Age of Animation, such as Betty Boop and the Looney Tunes.

However, an original score by Pierson for a contemporary short film called “My Moon,” silenced the cheery crowd. For nine minutes, the audience remained silent as the beautifully animated short about a love triangle among the Earth, moon and sun paired with the Cartoonists’ original soundtrack, perfectly encompassing the emotions of the film. The gentle, classical music the band played during the romantic parts of the film rose to a crescendo at the climax of the story.

After thunderous applause, the band sought to further impress the audience with other unorthodox methods of playing instruments.

Philips drew “oohs” and “aahs” from the crowd when he played both the clarinet and saxophone at the same time. He generated more laughter when he attempted to add a flute to the mix but failed — much to the audience’s delight.

Drummer Rossen Nedelchev performed a drum solo in near-absolute darkness. Then, his drumsticks lit up and changed colors with every hit. The audience erupted into applause.

For the finale, the band played the score to a classic Looney Tunes cartoon titled “A Corny Concerto.” Fast-paced jazz enhanced the antics of Bugs Bunny. After the short had finished, and the band played the iconic “That’s all Folks” outro, the audience gave a final roaring round of applause.

After the show, the band signed autographs and took pictures. 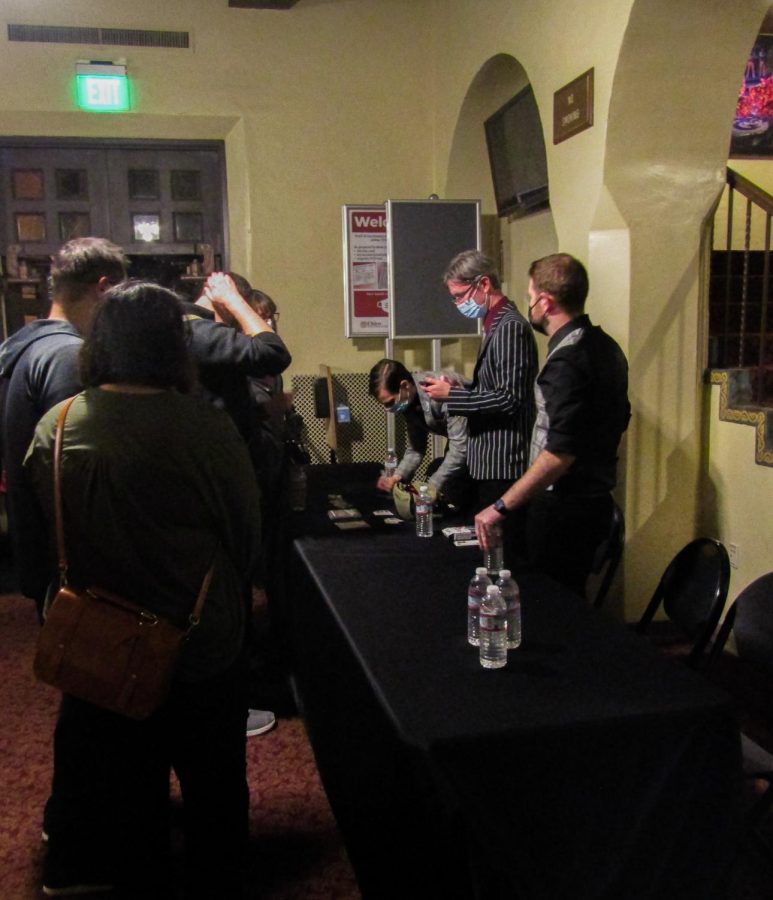 Members of the band interact with the crowd members, signing autographs and taking pictures. Photo taken Feb. 3, by Noah Herbst

“Our mission is for you to think about hearing the cartoons,” Pierson said. “That and to make you forget about your troubles for a while.”

For those interested in a wacky act that combines skilled musicianship, comedic relief and animation from across the ages, The Queen’s Cartoonists may be the show for you. The band is currently touring throughout the country and their next show is Feb. 10, at the Vilar Performing Arts Center in Beaver Creek, Colorado.

Noah Herbst can be reached at orionmanagingeditor.com or @NoahHerbst13 on Twitter.