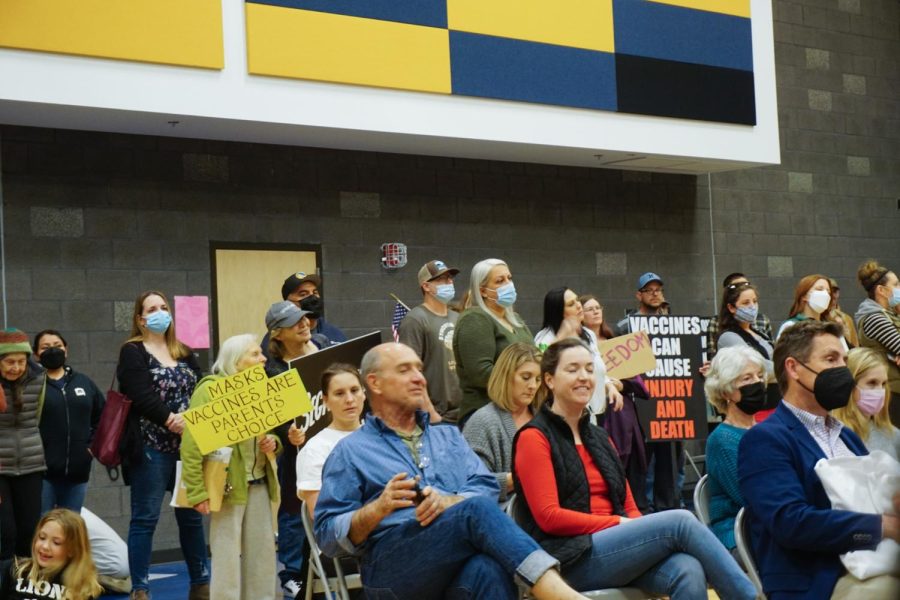 An audience of around 200 guests joined the Chico Unified School District Board of Education regular meeting at Marigold Elementary School on Feb. 16. Photo taken by Jolie Asuncion

The Chico Unified School District Board of Education was met by a crowd of parents and children protesting mask mandates on Feb. 16 at Marigold Elementary School.

Around 50 unmasked protesters gathered at the back of the room holding signs saying, “End the abuse,” and “Vaccines cause injury and death.” An estimated 150 people attended the meeting.

NOW: Chico Unified School District is holding its board meeting at Marigold Elementary School. The board is met by a large crowd include some attendees who are protesting masks in classrooms. pic.twitter.com/e13i4IfgOx

Eighteen speakers addressed the board during the public comment section.

A few accused the school board of being fearful to speak up against the state mask mandate. Three parents cited Roseville Joint Unified School District’s decision to no longer enforce masks as a step in the right direction. El Dorado Union High School District was also mentioned because the school changed its mask policies in light of student protests. 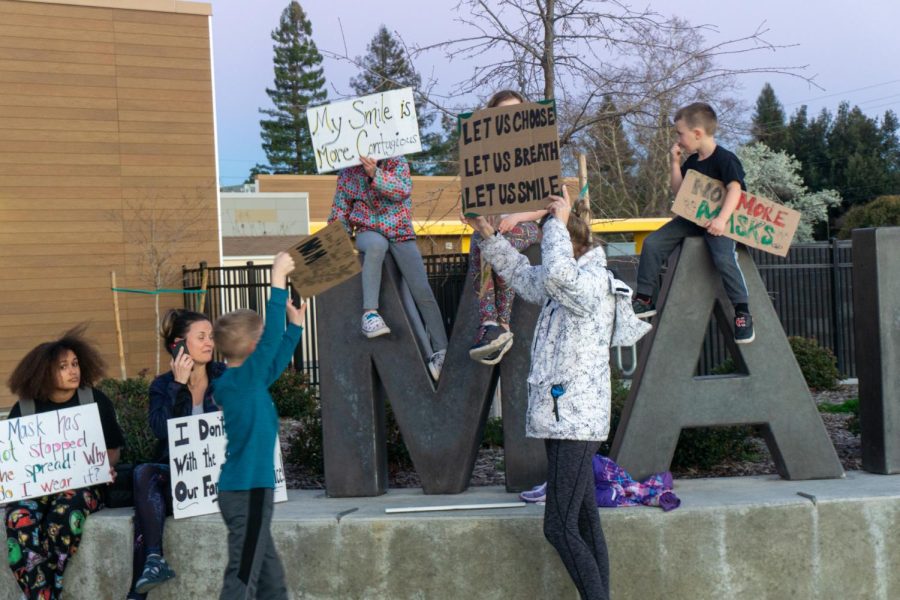 Parents and children held signs in protest of the mask mandate outside of the Marigold Elementary School multipurpose room on Feb. 16.

Jordan Egbert, a parent of two children at Shasta Elementary School, criticized the district’s email claiming public schools have no choice but to comply with the mask mandate because it could directly impact revenue.

“You can stand up to them. Sometimes laws need to be broken in order to be changed,” Egbert said. “Think about what Rosa Parks did. She stood up; just one person and the law was changed about segregating buses. You can do the same with masking.”

One speaker, Jessica Hunt, spoke to the board about her experience contracting COVID.

“My sons are very scared about other students at their school not wearing masks … and they were so scared that they were the ones that brought it home,” Hunt said.

She ended her public comment by thanking the board.

“I just want to thank you guys because I know that you’ve gotten a lot of grief for following the mandate and sticking to it,” she said. 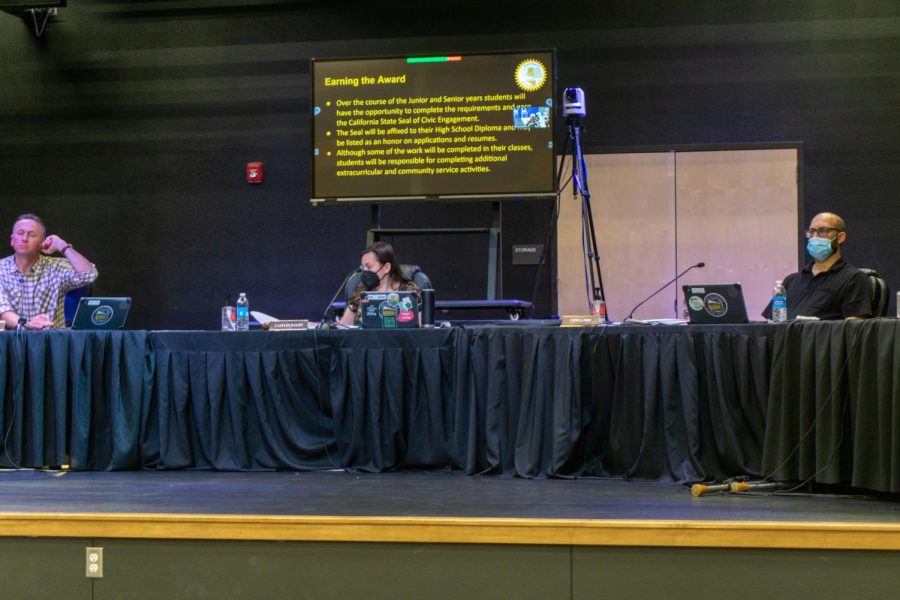 Board members Matt Tennis, Caitlyn Dalby and Tom Lando at the CUSD Board of Education regular meeting at Marigold Elementary School on Feb. 16.

“The indoor mask mandate has expired,” Tennis said. “I did wear it during the student presentations when there were students scheduled to speak before us and as a courtesy to those families and those kids,”

Tennis said the rule at the district is to be masked when children are present.

“There were some kids in the audience afterwards but they were masked and I don’t think they were worried about it so I think that in spirit of things, I wasn’t interested in masking myself,” Tennis said.

Among the public commenters, three people spoke on

issues that did not criticize the mask  mandate: Ed Rona of the Veterans of Foreign Wars Post 1555 gave information to the board regarding educational opportunities sponsored by the VFW for students and teachers at CUSD, Arthur Golden spoke to the board about the alleged inappropriate disciplining of his child, who lives with autism and attends Marigold Elementary School.

Following the public comment period, the board agreed to address the mask mandate on March 9.

A majority of the audience left the meeting after the board unanimously decided to bring the topic forward at their next meeting. With the audience size reduced significantly, the board moved on to other items on the agenda.

Board member Tom Lando exited the meeting during the recess for a family emergency, leaving four out of five members in the meeting.

The board debated the California voters’ Trustee Area Maps, and three of the original five maps were considered for adoption, which included “Green,” “Orange A” and “Orange B.” 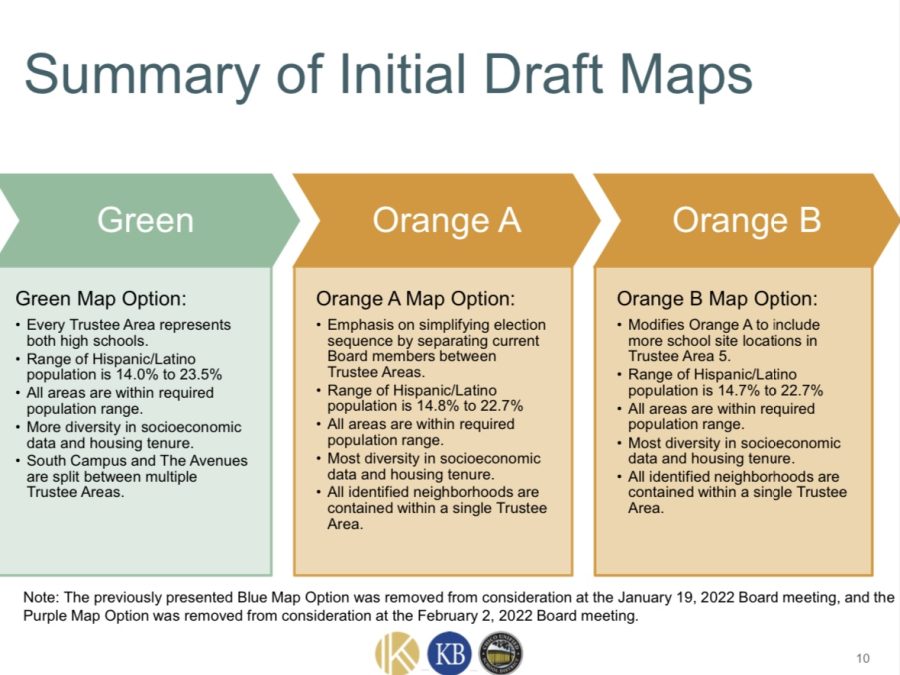 The foreseeable map adoption was introduced because of a change in the election system across California. Now, elected candidates for the BOE must be voted for by registered voters who live within their respective CUSD boundaries. This change began in February 2020 when CUSD announced its intention to transition in compliance with the California Voting Rights Act of 2001, which moves the state away from the original “at-large” election system where candidates could reside anywhere across the CUSD area. The process was delayed due to the COVID pandemic.

The board heard a presentation arguing that the “Green” map offers “more” diversity in socioeconomic data and housing tenure while also splitting South Campus and The Avenues into multiple Trustee Areas. The same presentation showed that the “Orange A” map put all identified neighborhoods into one Trustee Area while also being the “most” diverse in socioeconomic data. The “Orange B” map alters “Orange A” to include more school site locations in Trustee Area 5. 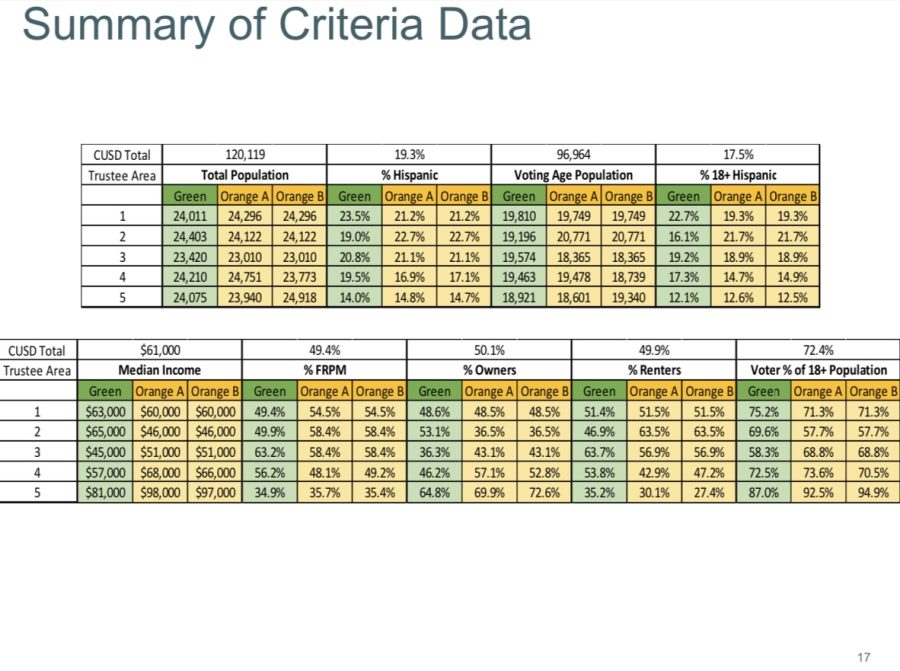 Robinson supported the “Orange” maps but said the “Green” map could be problematic.

“We have set a platform that is equitable for each of the current board members if they choose to participate in the process,” Robinson said in favor of the “Orange” maps.

Tennis passionately opposed the “Orange” maps and disagreed with Robinson.

“We are here to create the best map for the future of the district,” Tennis said, “Our interests as incumbents should not factor into the decision we make.”

Dalby noted that she wanted to finalize the decision at a later date, when all members are present. A special meeting will be held on March 2.

Other business at Wednesday’s meeting included:

The Mid-Year Local Control Accountability report displayed declines in both suspensions per day and attendance rates. The report noted improved scores due to special reading services attendance rate and an increase in revenue by $1 million.Fifteen international teachers participating in Chico State’s Fulbright Scholar Program introduced themselves to the school board. They will begin teaching at four CUSD schools starting next week.Daniel Adams and Brian Daggett, members of the custodial staff at Emma Wilson Elementary were given the Superintendent’s Award for their outstanding work.Eagle Scout Owen Smith was recognized as an honoree for the Superintendent’s Award.

Carrington Power, Jolie Asuncion and Kimberly Morales can be reached at [email protected] and @bykimmorales on twitter.