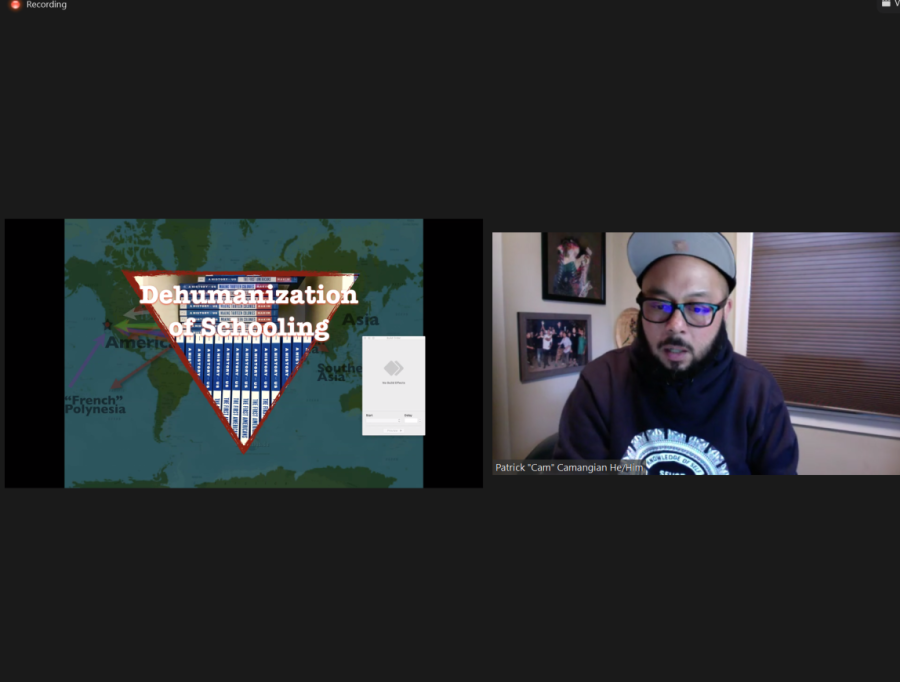 Fugitivity, abolition and racial justice; the fight to end oppression begins with the students themselves. Chico State is holding a virtual series titled “Anti-Racism Speaker Series,” hosted by the School of Education that takes place throughout the academic year.

Dr. Patrick Camangian, Professor of Teacher Education at the University of San Francisco, delivered his presentation “Social and Emotional Learning is Hegemonic Miseducation” on Feb. 15. It was organized by assistant professor Catherine Lemmi and Educational Policies and Programs senator, Annie Adamian.

Camangian’s research focuses on radical democratic analysis, critical pedagogy and health science research. He uses these areas of study in his profession.

His presentation focused on humanization’s effect on systems of oppression in modern society.

His presentation starts off by explaining the origins of the term hegemony: another word for domination. Camangian then lays out the two stages of hegemony: coercion and consent.

According to Camangian, coercion is defined as violent forces such as the military, the prison system and state-sanctioned violence. Consent is when the oppressed become complicit in their own oppression.

Camangian connects the concept of hegemony to miseducation, arguing how we think is based on the social conditions of our lives. An example he provided was how the California school system requires 10th graders to take a world history course, even though many textbooks for the course are titled “Western Civilization,” claiming that the history of the world originated in Europe.

“It’s a lot like the film ‘The Matrix’ because the matrix world is blinded over our eyes, to tell the truth,” Camangian said.

Camangian’s thesis focused on the dehumanization of schooling. He argues schools are taught a curriculum that was written by the privileged: mostly white people who wrote about other white people. He explains how this is still relevant today, especially in a capitalist system that profits off of white wealth.

“The US is a predatory state. Born off the genocide of indigenous people, the enslavement of Africans and the exploitation of Asians and other people around the world,” Camanigan said.

The audience was intrigued by his brutally honest tone, and were aware of how his points were a tough pill to swallow. Camanigan addressed his points in a strong passionate tone. It almost felt like he was speaking directly to your face.

He said miseducation doesn’t address the colonial social conditions that are responsible for suffering among these communities. Due to this, people of color are seen as a negative throughout history. His solution is to humanize our education by retelling it through the lens of those who have been oppressed.

Humanizing education necessitates actively supporting and celebrating every learner’s dignity, as well as acknowledging and assimilating the range of cultural backgrounds present in the classroom.

As his presentation comes towards an end, he closes off with an example of acclaimed rapper Tupac and his song “T.H.U.G.L.I.F.E.” Audience members learned that the acronym for his song actually stands for “the hate you give little infants f*cks everybody.” In other words, the cycle won’t end if we continue to raise children in an atmosphere surrounded by racism, violence and oppression. His song can be seen as a counter-narrative to history and an essential part of humanizing education.

“I was able to connect this to social and historical context,” Camanigan said. “My experiences were similar to the experiences of so many others like me.”

His presentation ended with a question segment from the audience. Students were able to ask questions about racism and solutions.

“You’ve given us a lot to think about. Thank you for the new possibilities you’ve given towards anti-racism towards our schools,” Lemmi said.

Camangian’s presentation is available in the form of a research article alongside Stephanie Cariaga, a professor at Cal State Dominguez Hills.

“I have the students reading this for my future classes. It’s on the syllabus,” Adamin said.