Best in the West: Wildcats advance to Elite 8 to face the Augusta Jaguars 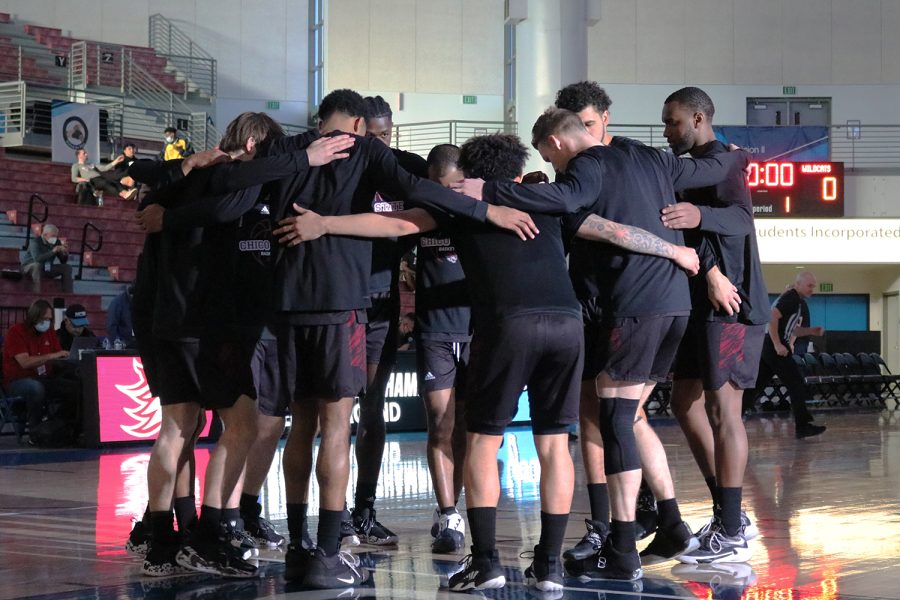 The Wildcats pre-game huddle prior to their game against the Coyotes.

The Wild, Wild West belongs to the Chico State Men’s Basketball team after they triumphed over the Alaska Fairbanks Nanooks 70-52 in the West Region Final.

Now they will face the Augusta University Jaguars from Augusta, Georgia, in an Elite 8 matchup. The game tips off on March 22 at 6:30 p.m. in the Ford Center in Evansville, Indiana.

Senior guard Kevin Warren said this championship win means a lot to the team because of the adversity they’ve faced and the hard work they have put in throughout the years.

“I love to compete with all my teammates, we got another week to compete at the highest level together,” Warren said.

The No. 15 Wildcats ended their regular season with an impressive 19-3 record, finishing 15-3 in conference play, which was good for second place in the California Collegiate Athletic Association.

The Wildcat’s regular season performance earned them a first-round bye in the CCAA tournament. In their first game of the tournament, the Wildcats came out flat and lost to the eventual CCAA tournament champions, the San Marcos Cougars 66-80.

Assistant coach Ricky Delgado-Martinez said what flipped the switch for the Wildcats was their shift in mentality.

“We came into the NCAA tournament ready to go,” Delgado-Martinez said. “We had a great week of practice and the guys got after it during the games.”

After their loss, the Wildcats awaited anxiously to see what seed they would receive for the West Region tournament. The Wildcats earned the No. 3 seed in the West and started their quest for control of the West against the Academy of Arts’ Urban Knights. This is the eighth time in the last 10 years the Wildcats have qualified for the NCAA Division 2 tournament. 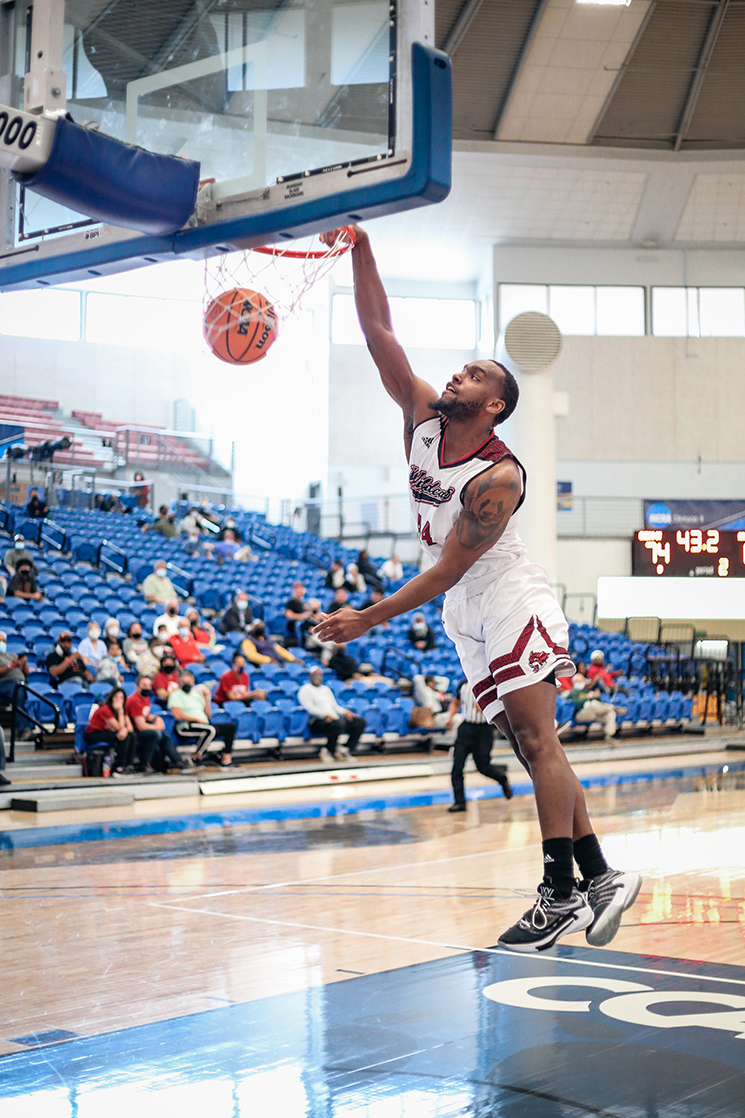 Wildcat Kelvin Wright Jr. throwing down a windmill dunk against the Urban Knights. 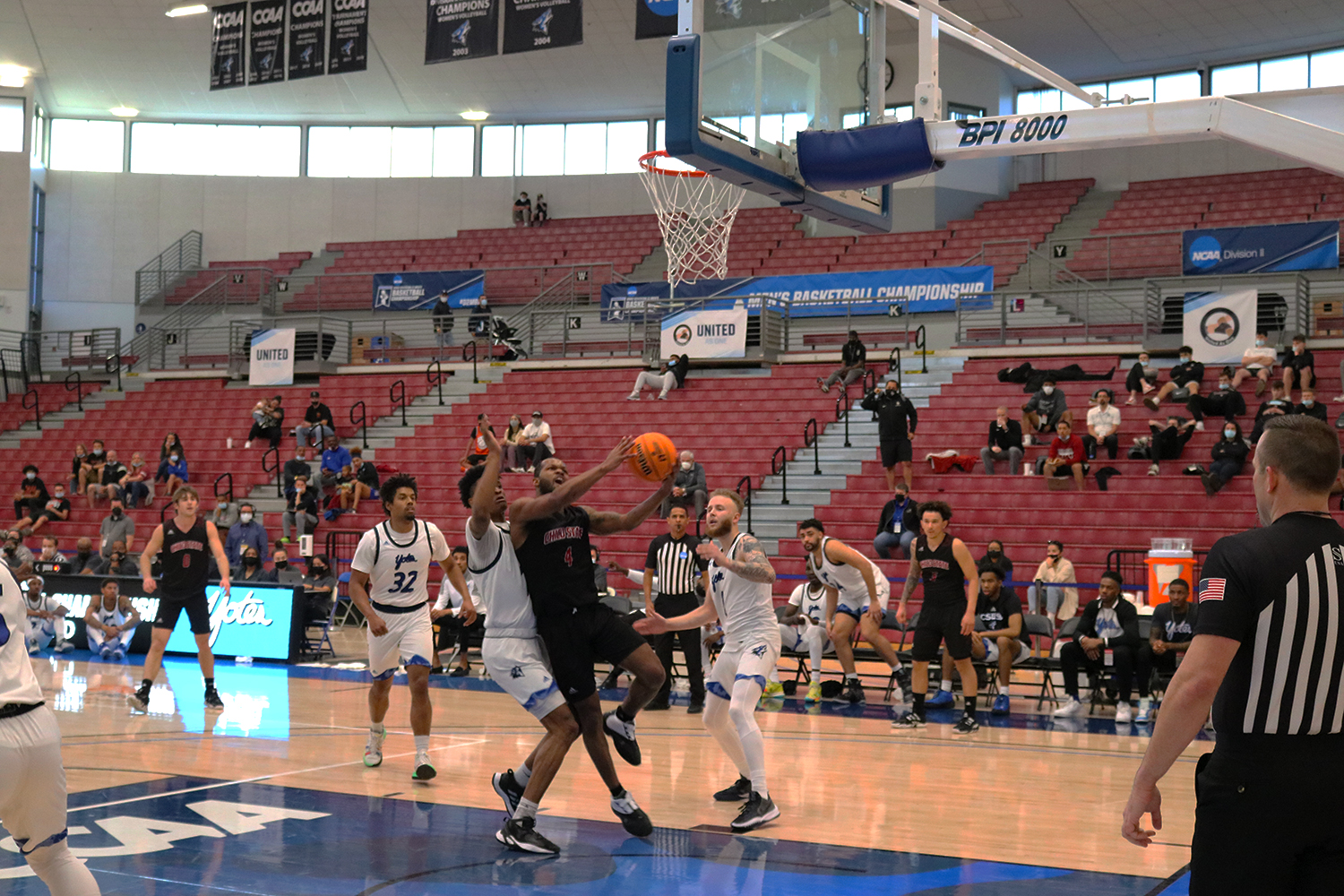 Wildcat Joshua Hamilton finishing a layup against the Coyotes 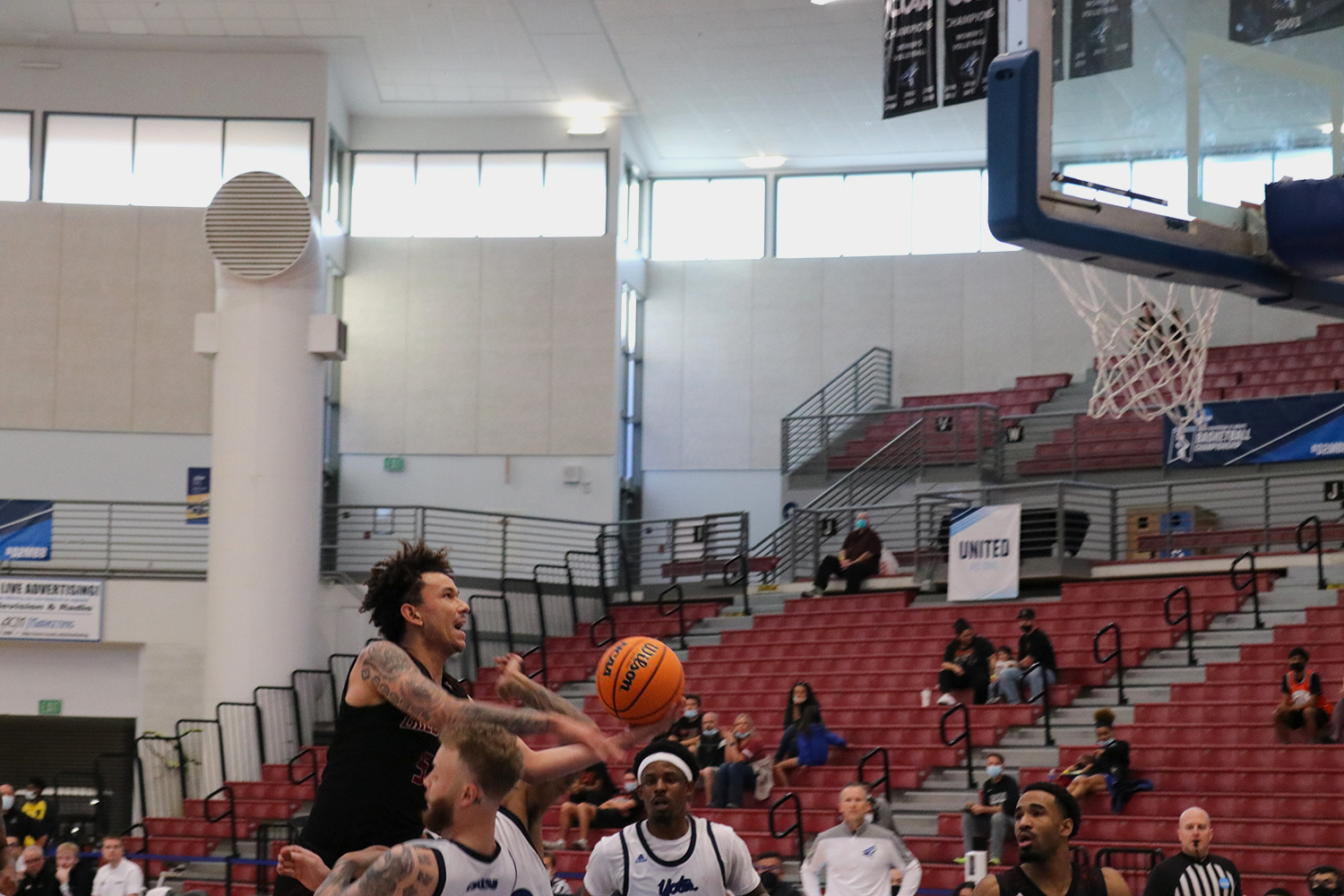 Wildcat Isaiah Brooks attempting a layup while being fouled 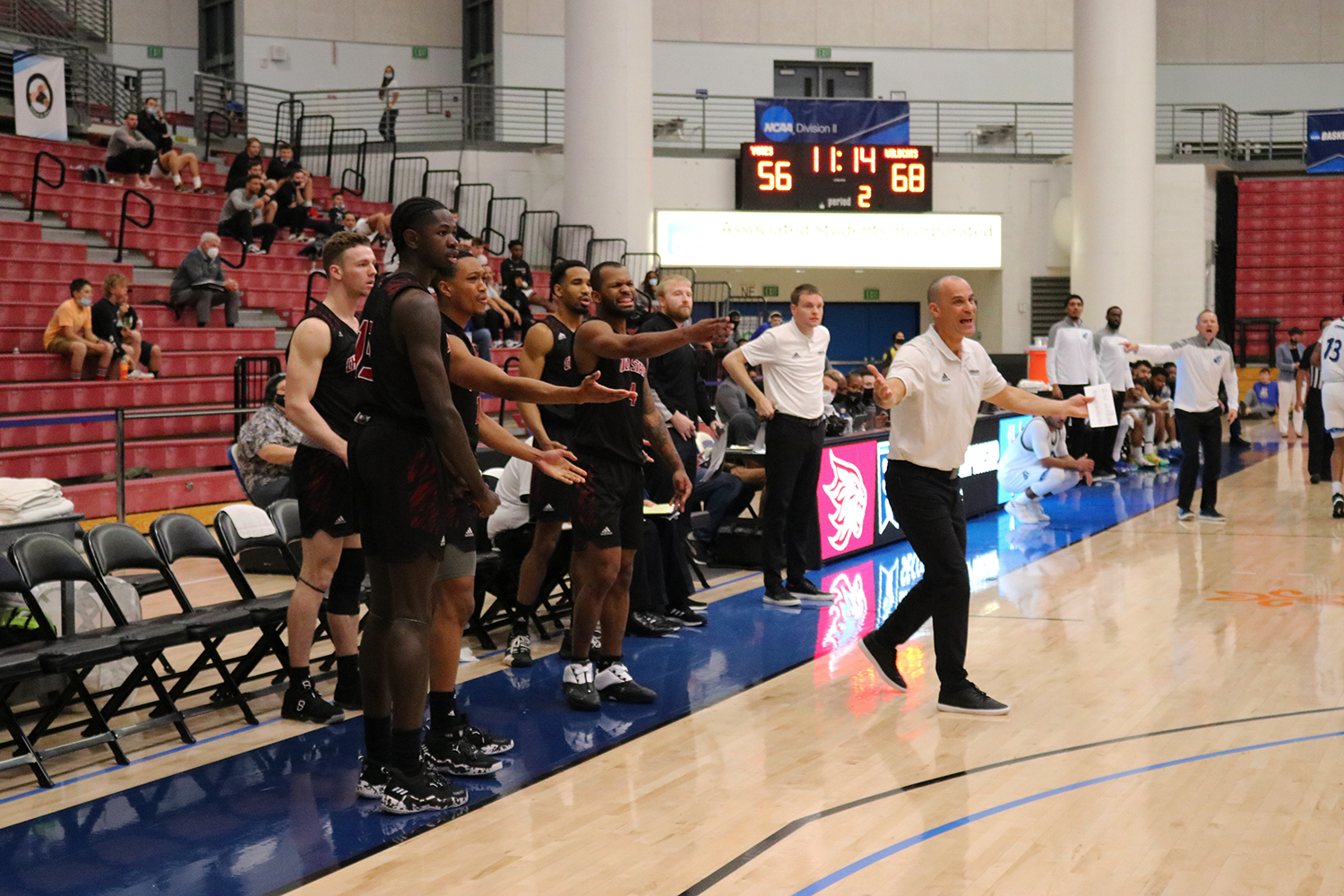 Round of 64: Wildcats v. Urban Knights

Earlier this season, the Wildcats defeated the Urban Knights during their home opener on Nov. 17 with a score of 71-61, but these No. 6 Urban Knights at the NCAA tournament were a different team, coming into the game as winners of their last five games and champions of the PacWest Conference tournament.

The rematch against the Urban Knights turned out to be the Kelvin Wright Jr. show. The sophomore forward from Rancho Cucamonga dropped a career-high of 18 points. He also added eight rebounds, one block and two steals to round out a stellar performance.

Wright Jr. said his paint presence and Duffy’s ability to stretch the floor makes it hard for their opponents to guard them.

Thanks in part to Wright Jr.’s performance, the Wildcats would cruise to a 78-61 win over the Urban Knights.

Senior forward Malik Duffy was named the West Region Player of theYear. Duffy is the first recipient of this award in Wildcat history.

Coach Greg Clink said he couldn’t be more proud ofr Duffy because of the work he has put in over the years.

“It couldn’t have happened to a better person,” Clink said. “He is one of the best players and persons I have been associated with.”

The Wildcats attended the game  between the Cal Poly Pomona Broncos and San Bernardino Coyotes right after their first round win, as they would face the winner in the second round.

Round of 32: Wildcats v. Coyotes

A close battle went the Coyotes way and the Wildcats got a shot at revenge.

Senior guard Colby Orr carried the team on his back with a career high of 26 points on an efficient 77% field goal percentage.

Orr nailed a clutch jumper with less than a minute remaining in the game to put the Wildcats up 88-80. This cushion was enough for the Wildcats, as they won 91-82.

Orr said it just happened to be his night.

“I found a rhythm after my first few shots went in,“ Orr said. “We have a special team and numerous people can have a big night any night.”

With this win the Wildcats have moved to the Sweet 16 and West Region tournament final.

The Wildcats faced the No. 8 University of Alaska Fairbanks Nanooks, who were the hottest team in the tournament as they were riding a seven-game win streak and were the winners of the GNAC Tournament.

After a Nanook jumper, the Wildcats went down 9-19 with 10 minutes remaining in the first half. This would be the Wildcats’ biggest deficit of the entire tournament.

The Wildcats had a change of pace and went on a 24-4 run to  end the half, and would head into halftime up 33-23. A big reason why was the play of sophomore forward Breenan Wheeler. Wheeler, who had a career-high eight points, sparked the Wildcats’ comeback.

Wheeler said he just wanted to make the best out of his minutes to be able to help his team secure the win.

“I just wanted to come in and contribute and once I got a shot in, I felt confident,” Wheeler said.

During the second half, the Wildcats went into cruise control and dominated the Nanooks 70-52. Duffy led the way with a game-high of 21 points, and he also managed to grab eight rebounds.

Clink said he is proud of the team’s effort and credits the Nanooks for a great game.

“We were aware of what kind of team the Nanooks were, I feel fortunate to have won the game,” Clink said. “I couldn’t have coached a better group of guys.” 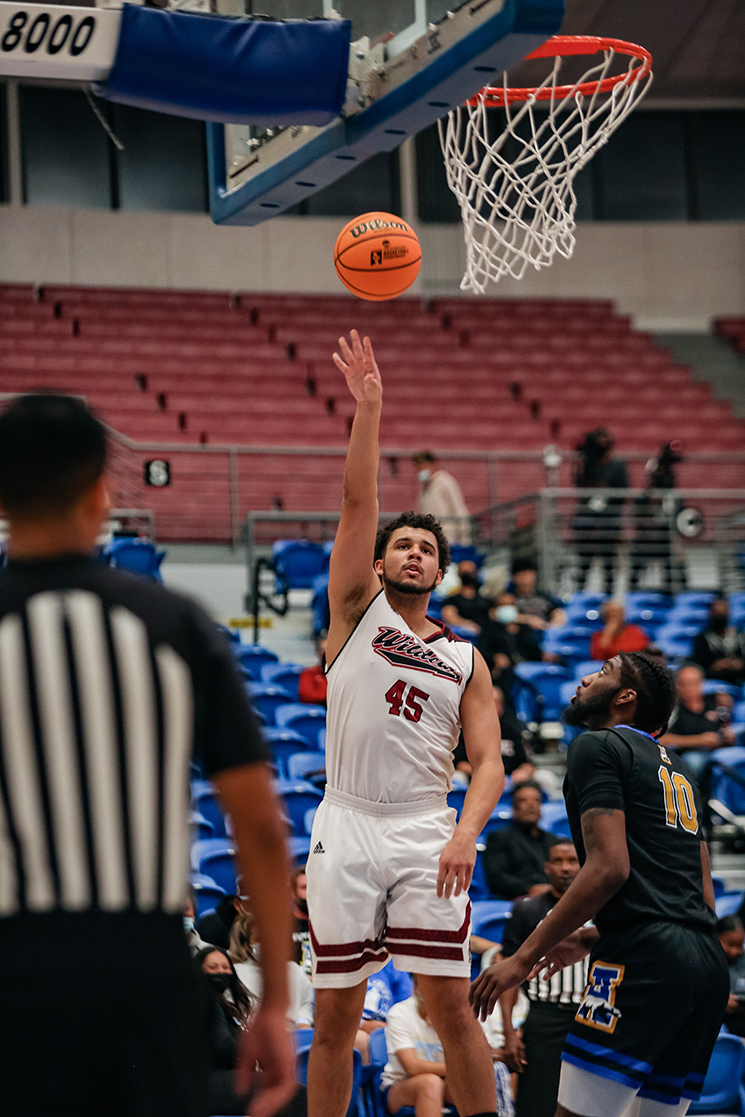 Wildcat Malik Duffy sinking in a floater against the Nanooks 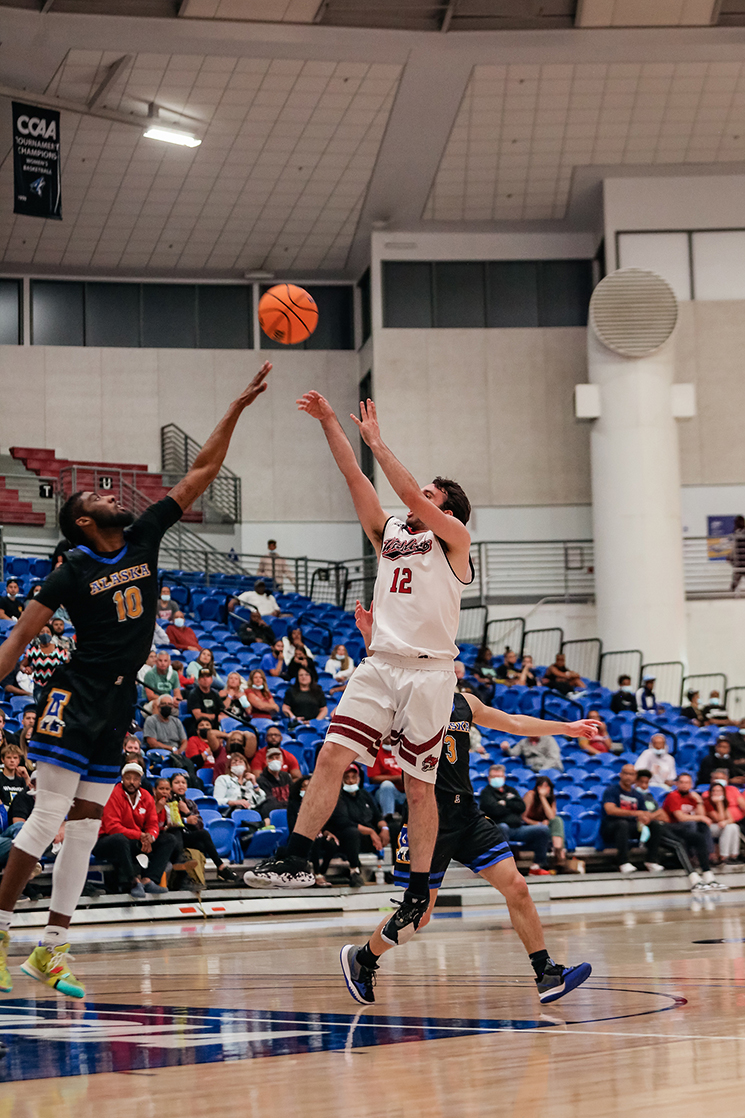 Wildcat Colby Orr shooting a jumper against the Nanooks. 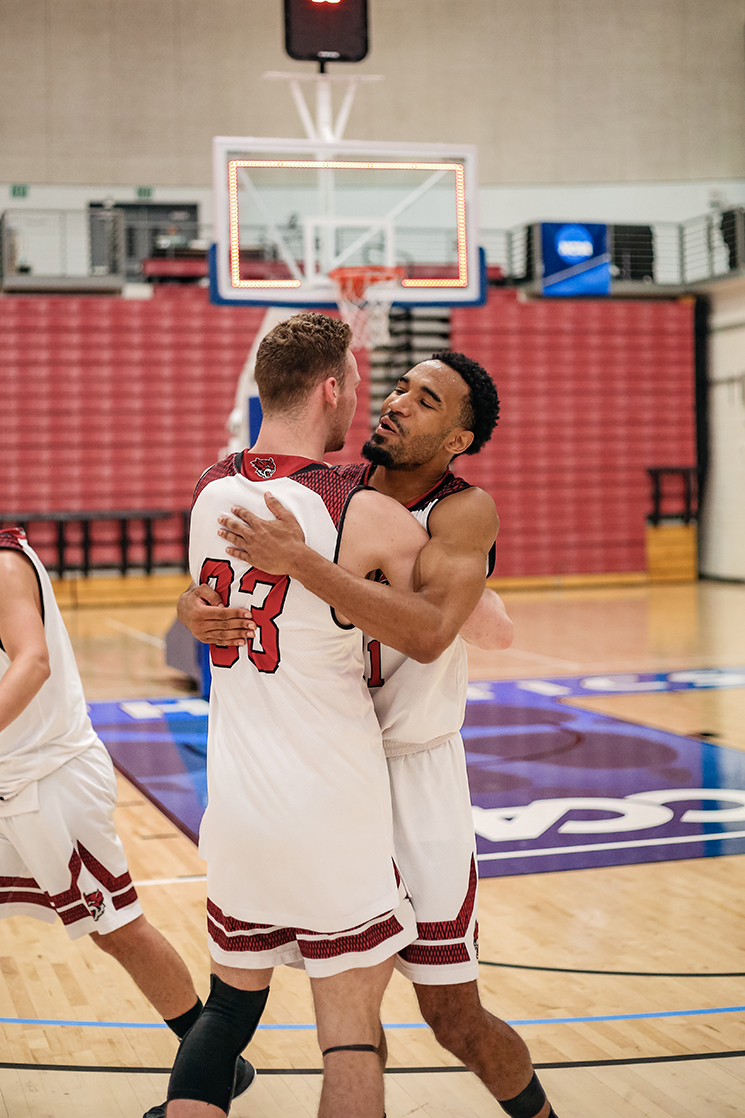 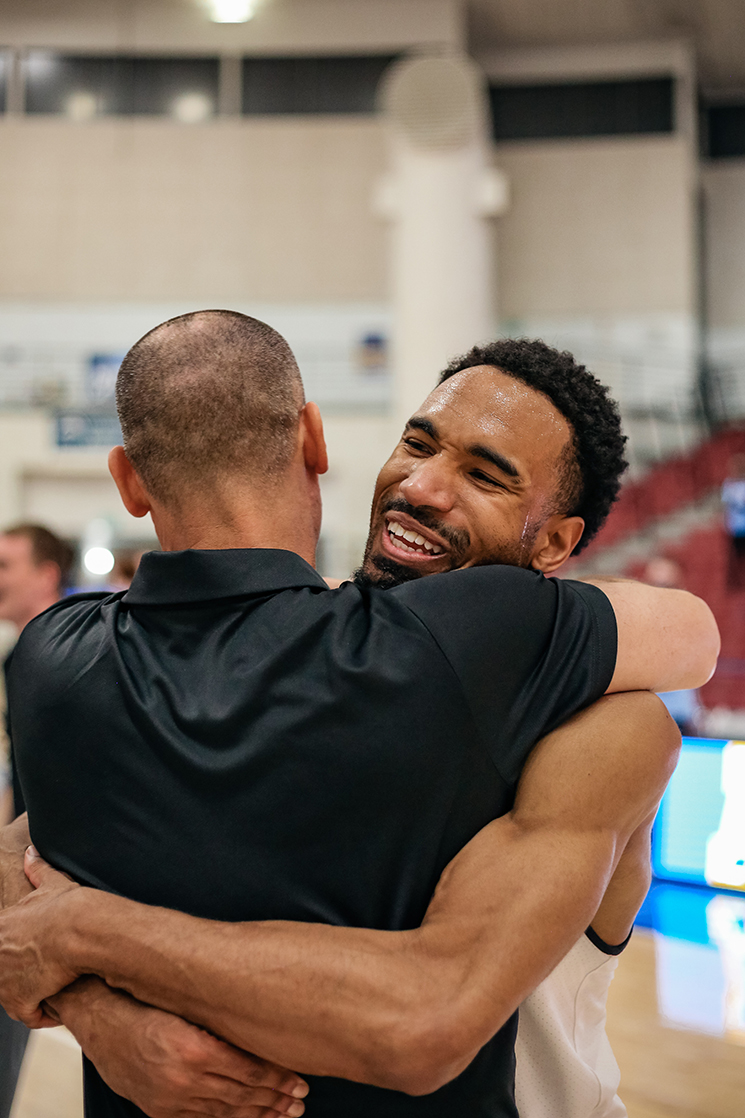 Senior guards Isaiah Brooks and Colby Orr were named to the All-West tournament team. Orr was named the most valuable player of the West Region Tournament. Orr averaged 14 points, two rebounds, two assists and two steals for the Wildcats during their championship run.

Duffy said returning for his last year of eligibility was already worth it, but adding a West Region title and an opportunity to make a run at the National Title makes it even more of a special season.

“I’m excited that we finally accomplished something that we have been working for,” Duffy said. “Our season isn’t over, we guarantee ourselves one more game and a chance to make history.”

This win secured the Wildcats their third West Region title and an Elite 8 spot in Evansville, Indiana. The Wildcats have improved to 22-4 this season and now have their sights set on a national title.

“We aren’t done yet,” Wheeler said. “We are going out to Indiana to win.”Javier Hernandez can be reached at [email protected] or @jhm1226 on Twitter