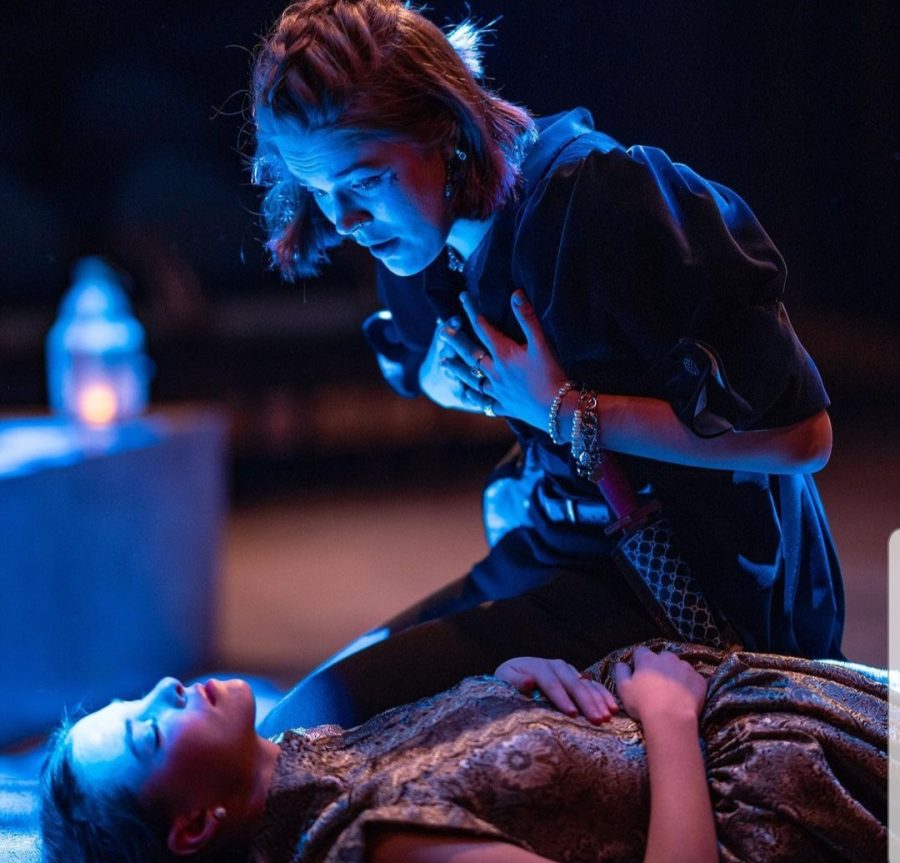 Skylar Wondrusch and Marlene Bruce perform the final act in Romeo and Juliet.

Have you ever met someone so breathtakingly beautiful that you fell in love with them at first sight, got married in secret, hid your love from those around you and drank poison to forever be with them even in death? No? Well, you could have experienced it all from the safety of your own seat at Chico State Theatre’s wonderful adaptation of the Shakespearean classic.

The show opened Wednesday, March 2 after those involved had worked on it tirelessly over the last few months.

Not only is the tale centuries old, but as one of the most famous plays of all time, William Shakespeare’s Romeo and Juliet is a difficult production to pull off in any capacity. Thankfully, Chico State Theatre’s production of the timely classic was facilitated by Director Jami Dru Witt Miller.

“I’ve worked on Shakespeare for the last 25 years,” Miller said.

When she spoke more on her experience with the work of Shakespeare. Miller said she performed on a replica of the Globe stage many times, and has acted in four different productions of Romeo and Juliet.

The passion that Miller mentioned was felt throughout the production by everyone involved.

Although the tale is a classic, the genders and sexualities of key characters have been changed to introduce the audience to a world that has moved beyond traditional gender roles. Furthermore, to represent this, gorgeous costumes were designed to befit the original story’s 1500’s setting while minor touches such as contemporary footwear and Louis Vuitton belts made them seem less out of place with today’s fashion.

The production decided to utilize the original lines first written by the Bard in the 16th century, a bold choice considering that the audience may have struggled to understand much of what was said.

“We certainly spent energy on the language and with our noses in the lexicon, but we were surrounded with enthusiastic and positive individuals which made working on the show a delight,” Miller said.

The time that was taken to study the language of the play is clear, as each performer’s use of tone and body language helped to give appropriate context to the dialogue that was delivered.

Miller said the focus for this production of Romeo and Juliet was on empowering and lifting the voices and identities of the actors.

This certainly rings true. Although the characters have been portrayed by a wide variety of actors and actresses over the past four centuries, they remain unique and original in the hands of the performers in this production.

Specifically, Skylar Wondrusch and Marlene Bruce as the titular Romeo & Juliet were spectacular. There was an electric chemistry between the two and you could practically see the love in their eyes. Susana Correa-Avila Robb also gave a charming, charismatic performance as Mercutio and Raven Tompkins delivered a wonderful, yet subdued performance as the Prince.

All of the performers involved did a great job, but the production very much belonged to those four performers who stole the show.

As terrific as the performers may have been, they were not the only element of the show that took the audience’s breath away. The costumes and the sets were beautiful. Each piece of the set or costumes appeared to be of high value and were wonderfully designed, making for a striking production to watch. The decoration of the theater made it difficult to tell where the sets ended and where the room began, further engaging the audience in the performance.

Excellent performances, breathtaking sets and stunning costumes; “Romeo & Juliet” was a seriously impressive production which both novices and experienced fans of Shakespeare were able to enjoy.

If this is the quality to be expected from Chico State Theatrer’s shows, then their next performance is not to be missed. Legally Blonde opens May 5 at the Laxson Auditorium.

Mark Carnochan can be reached at [email protected]