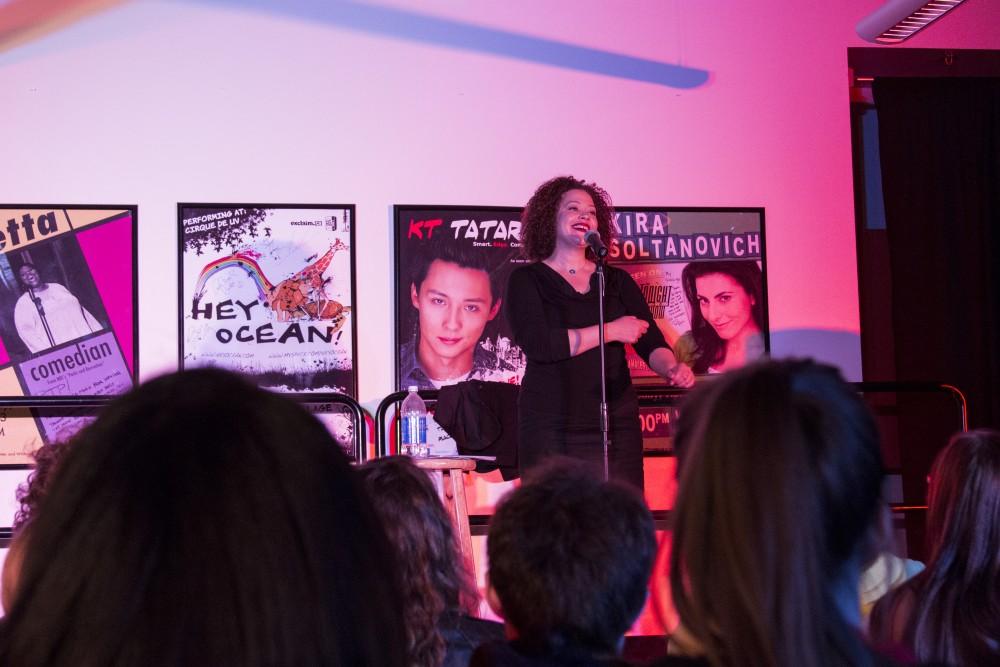 All eyes are on Suzi Q. Smith, as she performs her slam poetry show Thursday night at the UHUB on campus.Photo credit: Grant Mahan

Spoken word artist Suzi Q. Smith leaned into the mic on Thursday night at the UHUB stage and a quiet, luscious melody filled the room. A silent audience listened intently. Emotion seeped into each note Smith sang, making them sweeter than pancakes saturated by hot syrup. Smith sang and recited poems that made the audience laugh, cry and shout in agreement. The Thursday night event at the UHUB was hosted by Prime Time Productions, part of University Housing and Food Service, to celebrate Black History Month.

Smith spoke of love knowing no language in a poem she wrote for a Valentine’s Day rally outside of a U.S. Immigration and Customs Enforcement detention center in Denver.

“I do not know what language bullets speak,” Smith said. “I’ve only ever heard them whisper past my head in words I do not wish to remember or repeat.” Justin Timberlake was the topic of a short poem Smith wrote in response to his single “Take Back the Night.” Smith wondered just who exactly the straight, cisgendered, white male was taking back the night from, as the song echoes the name of the movement to end sexual violence that has been around since 1975. Smith counted the kisses an ex-boyfriend gave to another girl in a heartbreaking poem that had one audience member wiping her eyes and leaning on a friend’s shoulder. “Twenty-one,” Smith said. “I should’ve stopped naming them by now. Should not consider each lost kiss a missing person.”

Smith wrote another poem during the Bush administration and told the audience she looks forward to the day when she no longer has to recite it.

“I have written letters, have rallied and organized and spoken out,” Smith said. “I have voted and only found the lines in the sand drawn more clearly. It is love or it is murder. I am walking the fence between the two.”

Smith asked for comments, questions or concerns between sets of poems. The audience was comfortable with her and every time she paused she encountered more questions than she could answer.

The key to her confidence is aiming to be as much of herself as she can possibly be every day, Smith said. “I can’t even fake it anymore,” she said. “Like, I’m not even Clark Kent anymore. It’s just Superman all the time. I’ve been a lot of people, right? But I’ve only ever really enjoyed being myself.”

Rosa Scoma, a senior English studies major, has been writing poetry since she was 13. Scoma placed third in the poetry slam at Naked Lounge on Feb. 13 and opened for Smith.

Performing with a poet like Smith made her realize what she can do as an artist, Scoma said.