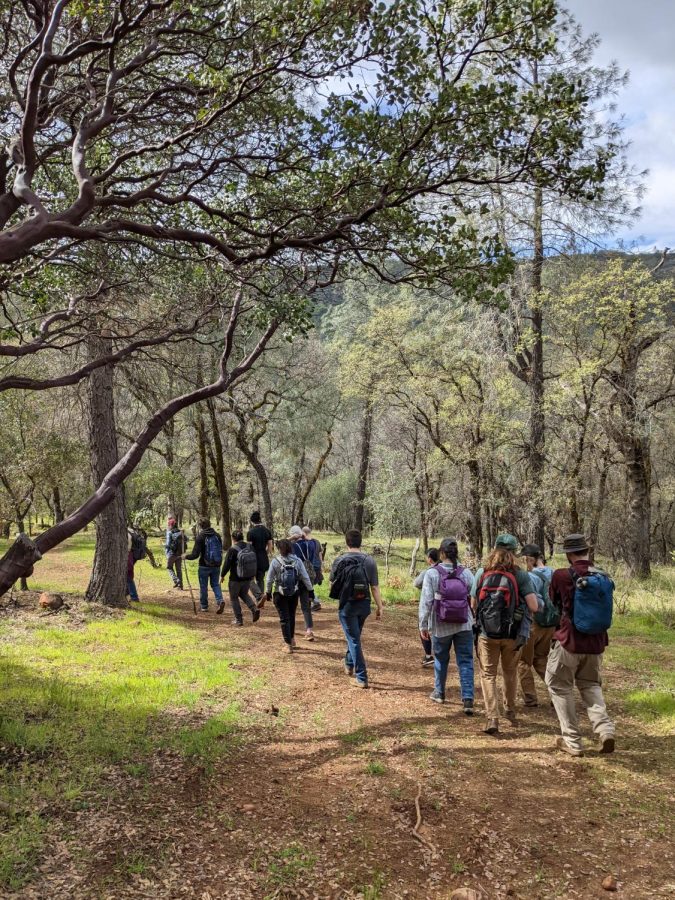 The hike toward Big Chico Creek.

It’s a chilly morning of March 5, and I was in a cramped car driving on Highway 32 toward the Big Chico Creek Ecological Reserve with three girls I had just met a few days prior at the Watershed Tour orientation. The Watershed Tour is a one-unit course, called GEOS 499, where students spend a full weekend at the reserve filled with educational activities and adventure.

“The Center for Water and the Environment thought it would be a really neat idea to bring students outside and also learn about the creek that runs through campus,” Co-director Sandrine Matiasek said.

The Watershed Tour was started in 2017 by Dr. Todd Greene, the previous director of the program. He got members and faculty from the Center for Water and the Environment to create learning activities following a drop of water from the headwaters in Colby Mountain to the Sacramento River.

“The Watershed Tour was organized by activity, it is not a lecture, it isn’t even a lab,” Greene said. “It is to get out there in the field, and do stuff, collect data, interpret the data and record observations like researchers do.” 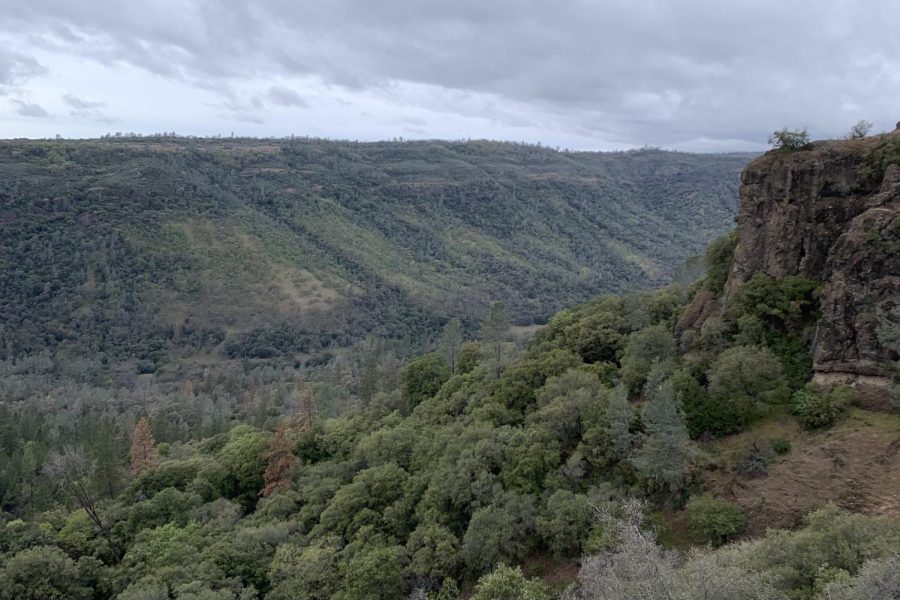 View of BCCER. Photo taken by Gabriela Rudolph on March 5.

I am in no way a science person. However, I somehow found myself enrolled in the class and ready for whatever the weekend would bring. Our car was packed with bags, pillows and sleeping bags that stacked to the brim of the trunk. About a half hour drive from downtown, we made a sharp left turn to the entrance of BCCER that could have easily been missed if there hadn’t been a sign placed. I held tightly to the bag on my lap.

The descent to our destination was steep and bumpy, and halfway there a man greeted us, guiding us in the right direction. Eventually, we made it to the campground, however it was not a traditional campground. In fact, camping is not permitted in BCCER, the only exception is for the Watershed Tour. Next to the campground was a barn, which was used as a storage space for food and supplies, and opened up to an area with tables and a cornhole.

We got out of the car and followed the crowd of students. Clouds gathered up above us, bringing the threat of rain, as cold air tickled my cheeks. Cars were still trickling into the parking lot.

At 9 a.m., co-directors Sandrine Matiasek and Jackson Webster brought everyone into a circle and divided us into two groups. I was placed in the first group.

From there, we were told that we’d be taking a hike, but if needed, we could drive. Everyone agreed to embark on the hike on foot, following faculty and the only dog at the BCCER, Jesse.

We soon realized hiking was a mistake. The drive down to the watershed was steep, and so was the hike up. It wasn’t too bad at first. The serenity of the environment was beautiful — lots of lush greenery, patches of moss grew on the trees we passed and we could hear the chirping of birds.

Then, it became more difficult to breathe with cold, piercing air stabbing my throat. With each step, I kept thinking about how out-of-shape I was. Though, after looking around at the rest of my group, the steep incline seemed to be getting to everyone, with some even stopping to catch their breath.

We finally made it to the top, where we had a great view of the ecological reserve. Greene guided us through an activity where we examined the Tuscan Formation, which are layers of sedimentary rock. He explained that it’s important to study outcrops of rocks above water to understand what the formation of rock will be like when drilling for groundwater. 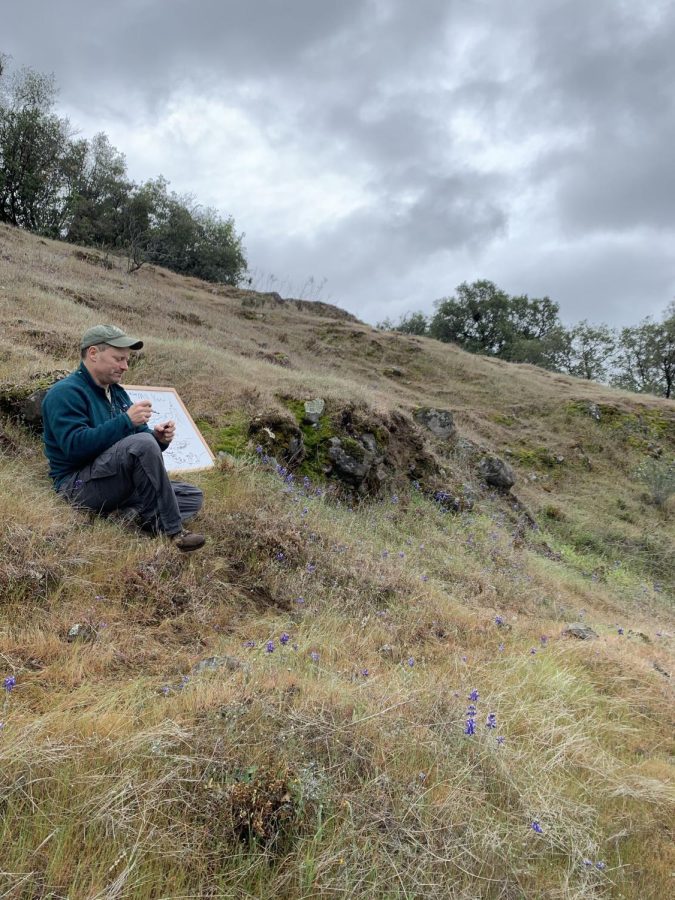 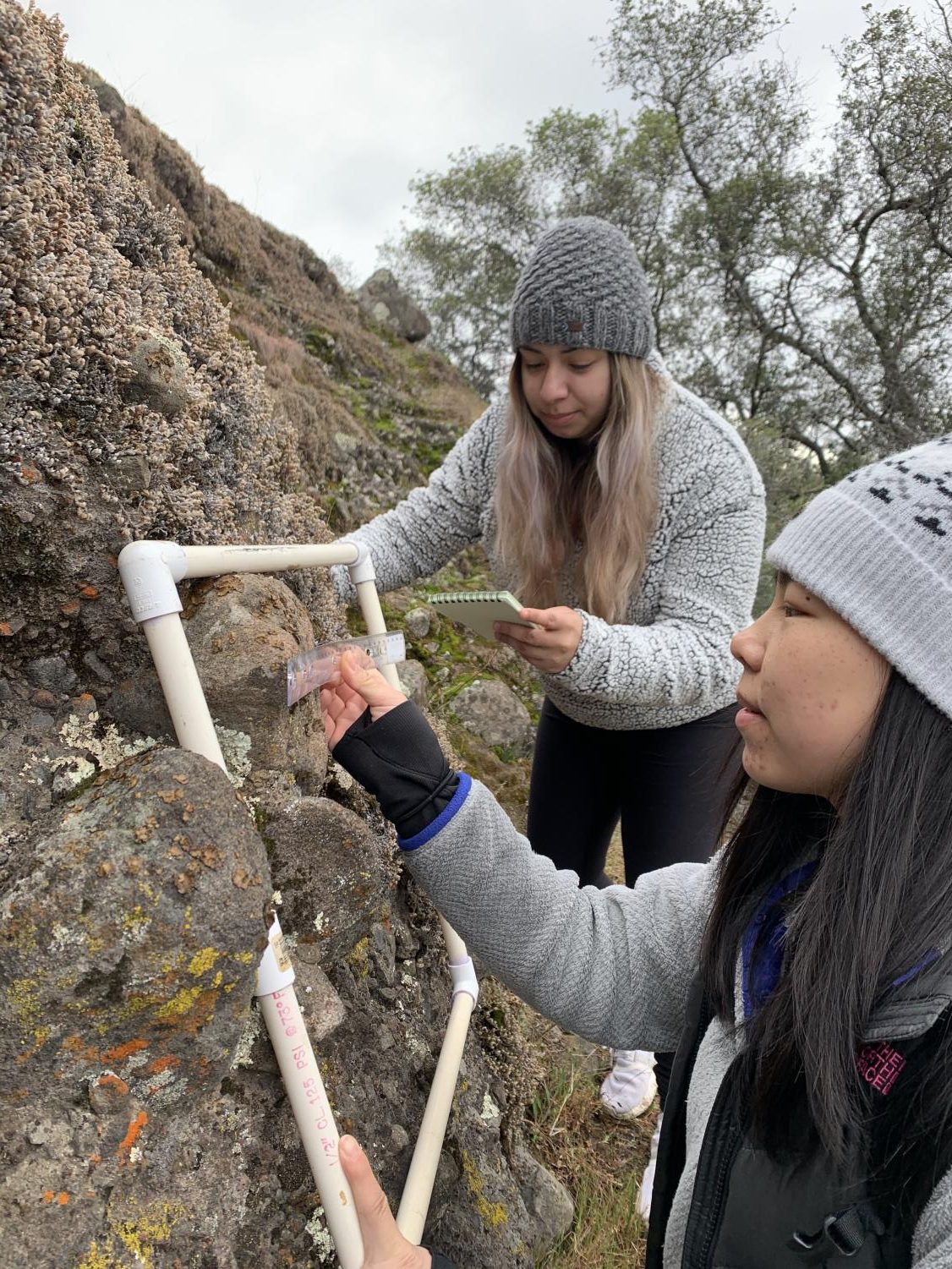 As part of the activity, we were tasked with taking measurements of the rocks and determining the flow of the Tuscan.

Afterward, we made our way back to the campsite. This time we took a much flatter route. We took a break and ate sandwiches.

Next, we walked downward toward the creek. Although still a hike, it wasn’t nearly as difficult as the first. The greatest challenge was dodging poison oak, which crept along the sides of the trail.

After about 45 minutes, we reached the Big Chico Creek, the same creek that runs through campus. There, we measured the streamflow using an Acoustic Doppler Current Profiler and tested water quality using a portable spectrometer. I wasn’t too familiar with the instruments, but environmental science students were there to help.

Closeby, we walked over toward a field where our group was encouraged to “herp.” Herping consists of getting your hands dirty by flipping logs and rocks to examine any wildlife that may be inhabiting underneath. It’s important to stand on the opposite side of where you’re flipping fin case something springs out, such as a snake. It’s also essential to replace the log or rock exactly where it initially was, because each object has its own, unique ecosystem underneath. 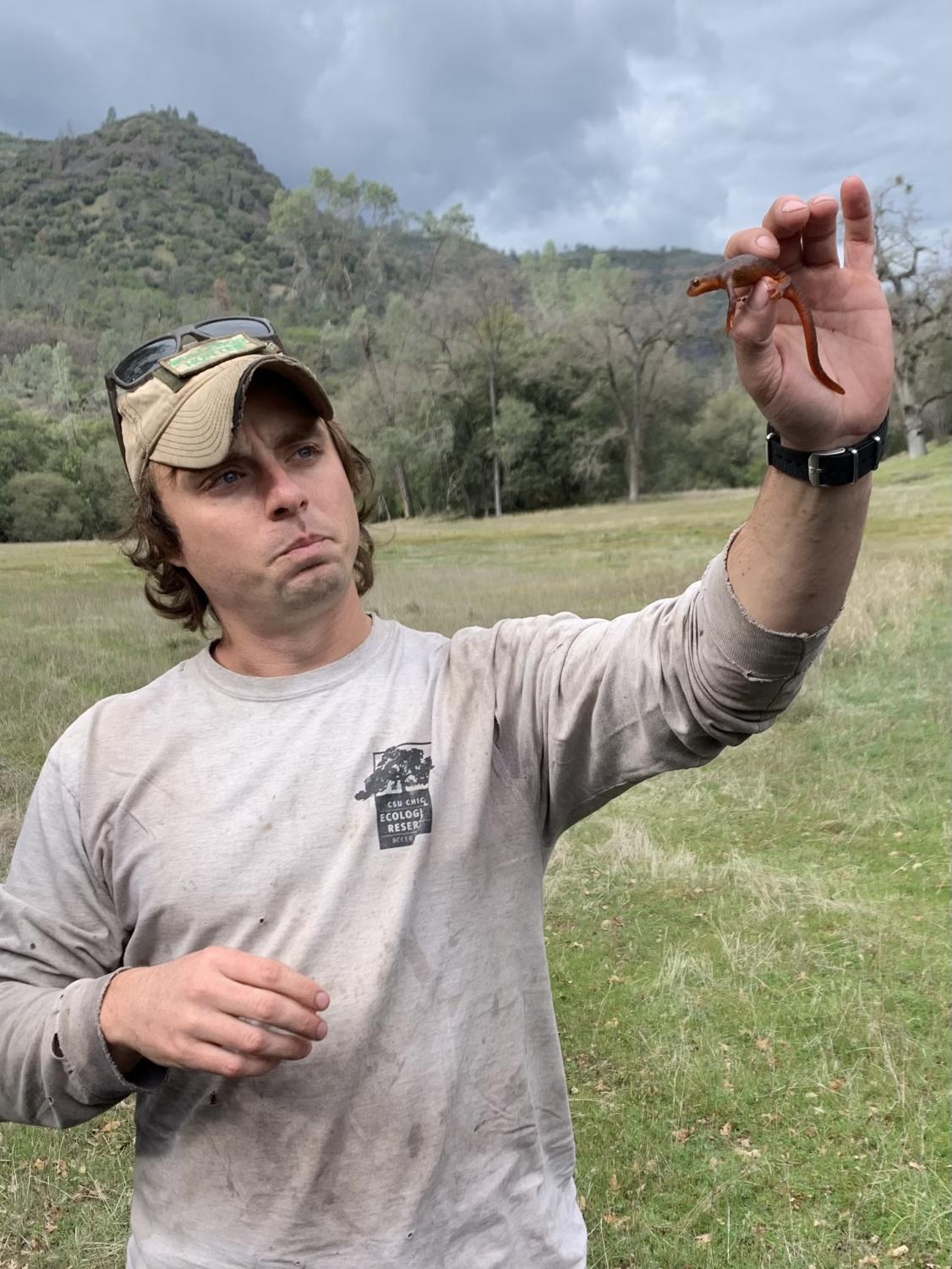 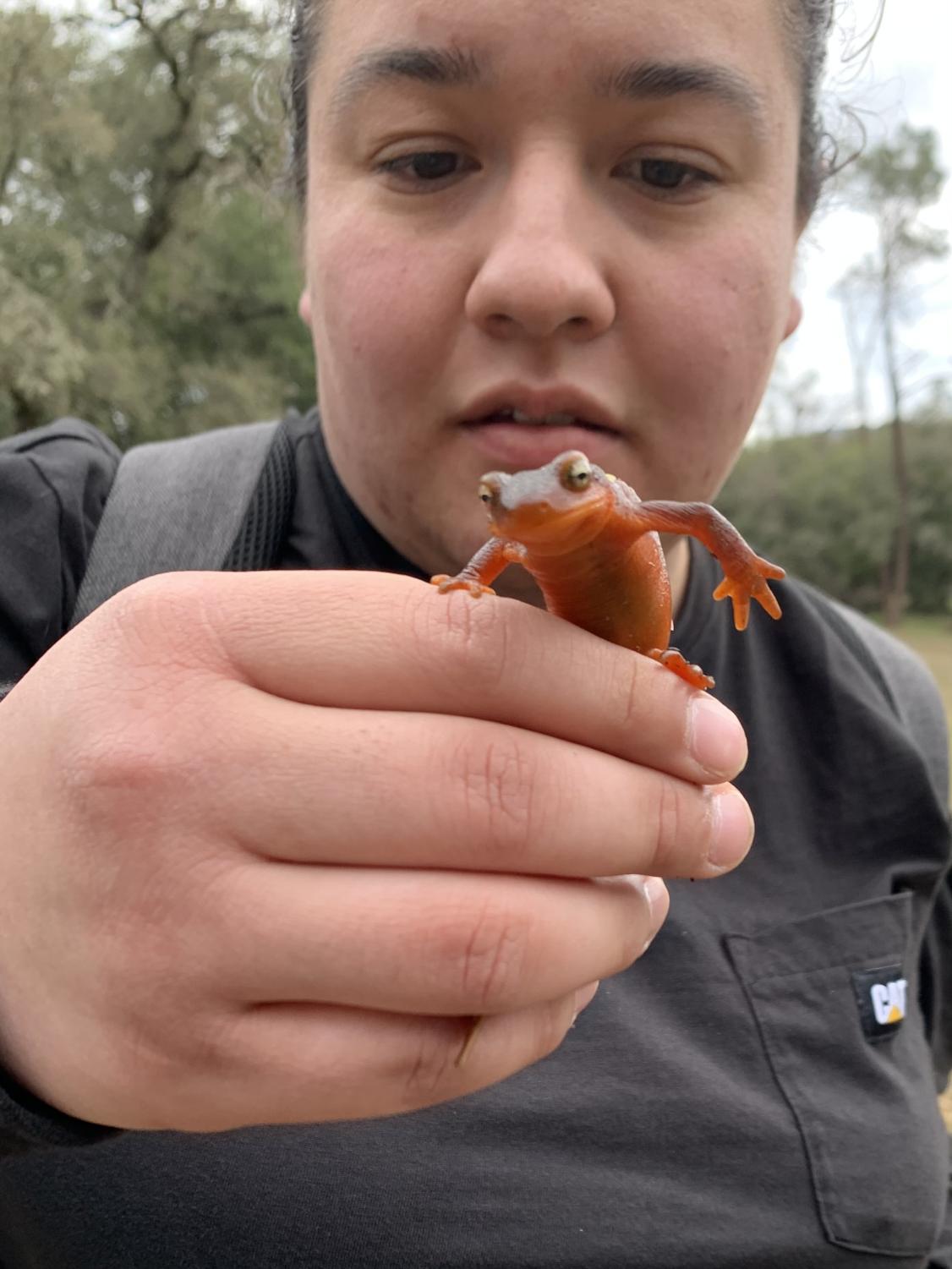 During this activity, we mostly found Sierra newts, which appeared to populate the ecological reserve like rats in a big city. The adorable amphibians were a great attraction to the group and quickly became the stars of the activity. Students picked them up and let them crawl around on their hands.

According to student assistant David Terry, newts are poisonous. They contain a dangerous toxin called tetrodotoxin, which is only poisonous when consumed.

As the day grew closer to the end, the groups began making their ways back to the campsite. The first group returned first, giving us time to set up our tents, eat and relax.

Toward nighttime, when temperatures plummeted, students huddled around a campfire to keep warm. No amount of layers could have prepared me for the cold night ahead. I wore nearly every single shirt and sweater I had brought on the trip, yet still found myself shivering the entire night. 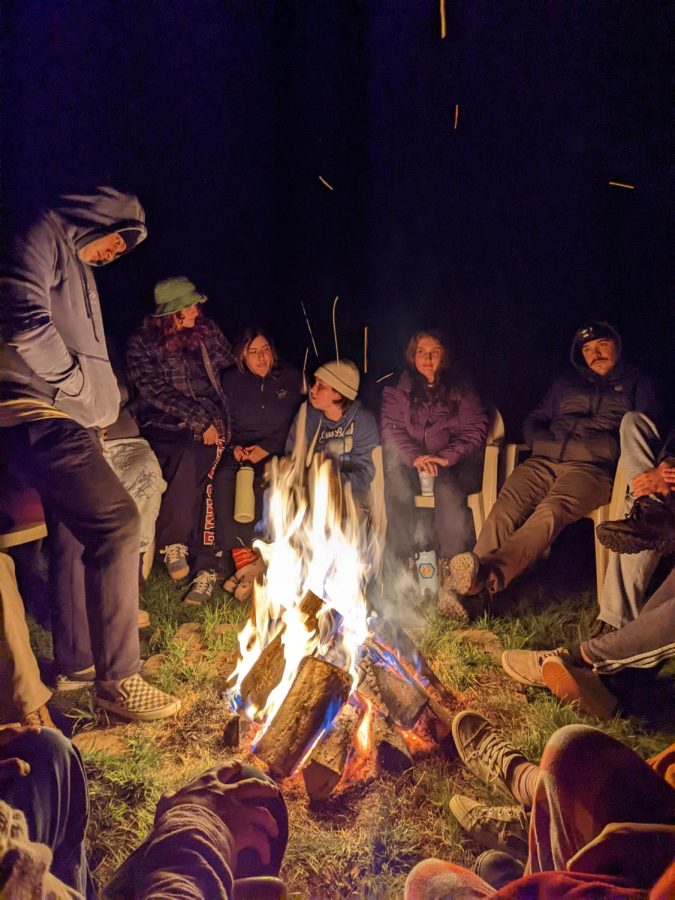 The next morning, it appeared the other campers had a similar experience. Half-awake, we grabbed some coffee and bagels, fueling ourselves for day two.

Professor Don Miller, joined the Watershed Tour and explained galls, an abnormal growth that appears on manzanitas. Although galls might seem like a parasite to the trees, Miller insisted that it does not harm them.

In small groups, we spread out to conduct measurements and analyze the galls on each manzanita. While doing the activity, we also noticed berries growing on the trees. Curious, we tried them. They tasted like tiny apples, only extremely sour. According to Miller, indegenous people would use the manzanita berries to make teas.

Next, we met up with professor Don Hankins, who demonstrated a prescribed fire by burning deer grass. Hankins described the importance of prescribed fires like cleaning a room. It helps prevent potential disasters like last year’s Dixie Fire, the first fire in California history to burn clear across the Sierra Nevada. With the weather already so dry, another destructive wildfire seems inevitable.

“There’s a lot more tree mortality that’s happening in the foothills and elsewhere within the state,” Hankins said. “The vegetation itself across the state from all vegetation community types is really at risk.” 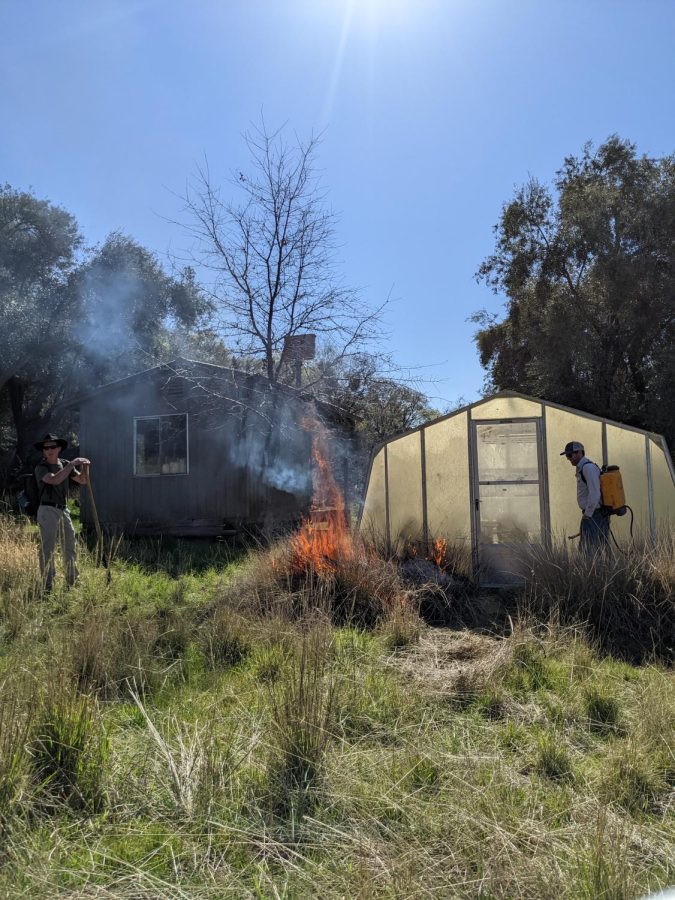 He hopes policy makers will do the right thing, but barriers get in the way of California being able to prescribe controlled burns at necessary scale.

Last spring, Hankins co-wrote a report called Good Fire, where he identified California’s strict regulation on intentional fires, as well as a severe lack of understanding on the importance of cultural burning among the indigenous communities.

To end the day our group looked at samples of bugs from the creek collected at last year’s Watershed Tour. We analyzed the biodiversity of the samples to determine the water quality.

By the later afternoon, we packed up our tents and said our goodbyes. Before that weekend, we were mostly strangers, but came out bonded by tough hikes, poison newts and campfire stories. I left the ecological reserve grateful and with a new understanding of Chico State’s backyard.

The Watershed Tour will have two more day trips, on April 9 and April 23.

Gabriela Rudolph can be reached at [email protected]