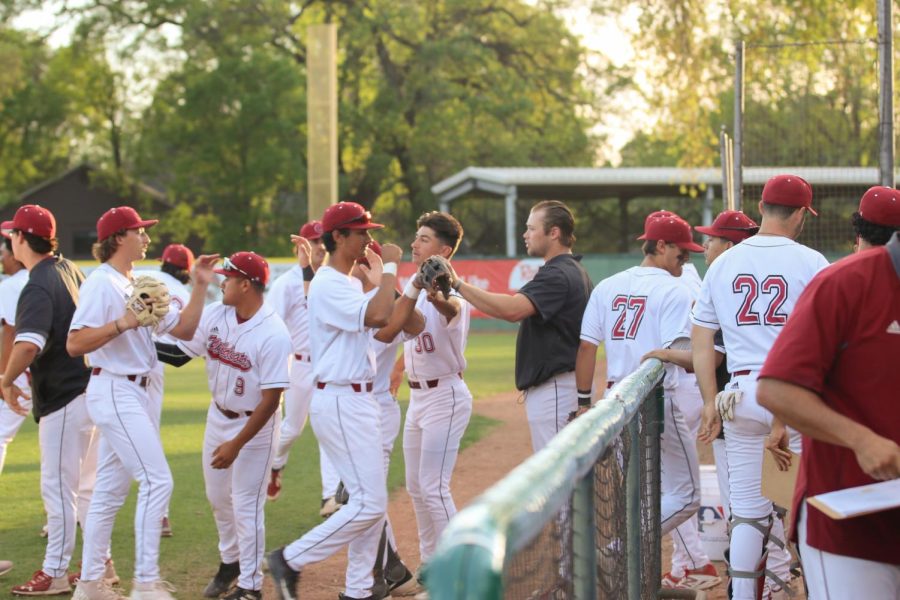 On March 25, the Wildcats players are greeting infielders after getting out of the first inning. Chico State defeated San Marcos 18-4 at Nettleton Stadium.

Over the past weekend, Morgan finished 12-18 at the plate, with a .667 batting average in the four-game series against the Golden Eagles.

On Friday, the Golden Eagles hosted the Wildcats at Reeder Field where Chico State came out victorious, winning 4-3. In the top of the ninth, senior outfielder Jack Murphy hit a ground ball which caused the Wildcats to get the go-ahead run off a fielding error.

“After being down early, our bullpen did exactly what they are supposed to do which kept us in the game,” Morgan said. “We were able to score runs late in the game and our bullpen shut them down.”

In Friday’s matchup, the Wildcats and the Golden Eagles both had solid performances from their pitchers. For the Wildcats, junior starting pitcher Rylan Tinsley pitched six innings, only allowing five hits, one run and earning three strikeouts.

“We’re not in a lot of close games like we were this weekend so we needed to increase the energy in the dugout,” sophomore pitcher Kevin Lyons said. “We did what we could do to push a run across late to secure the win.” 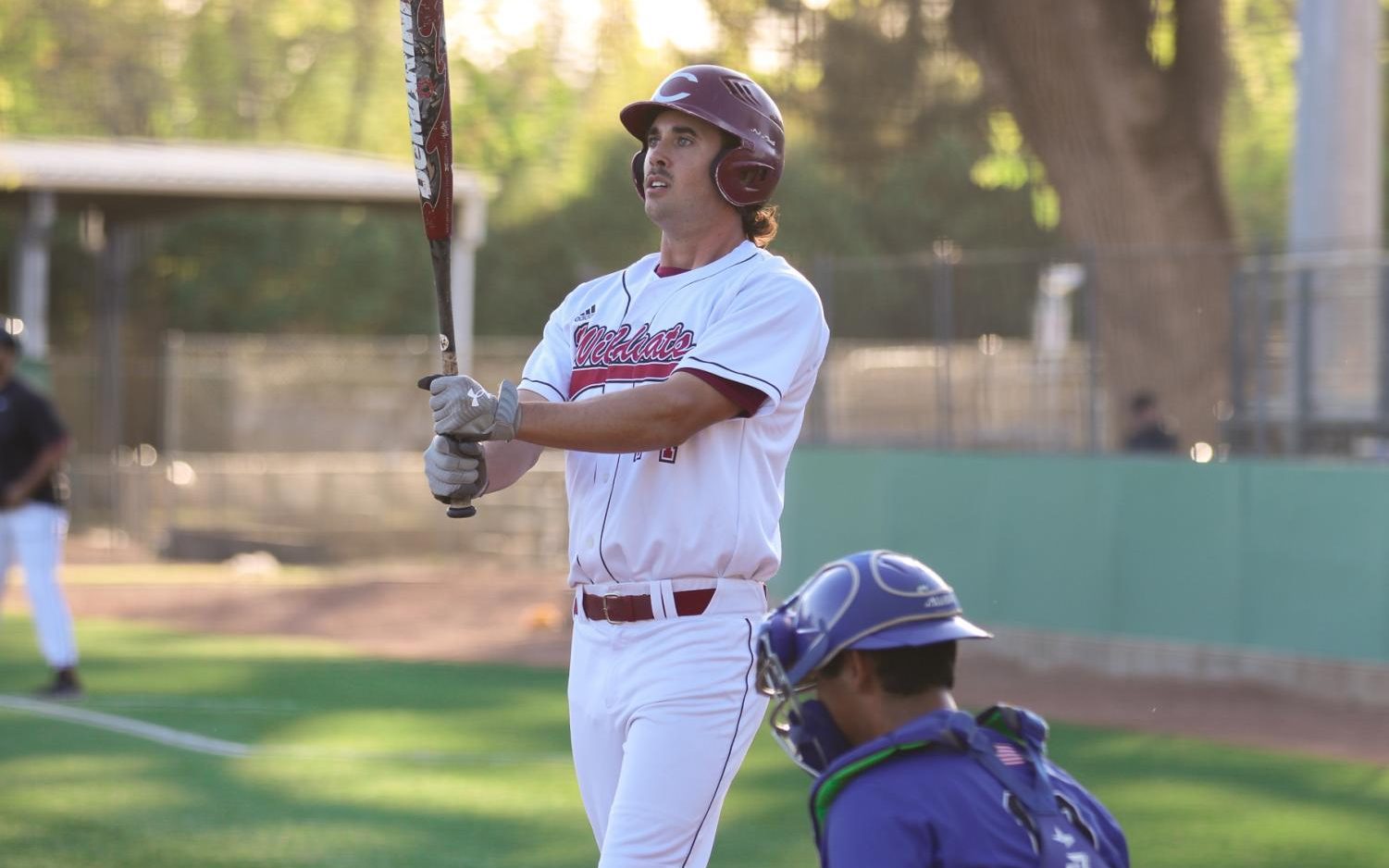 Walking up to the batter’s box, senior Jack Murphy looks at the barrel of his bat waiting for the pitcher to throw the ball towards home plate.

In the first game of the doubleheader on Saturday, the Wildcats held off the Golden Eagles in a near comeback, securing another win with a score of 8-7.

Chico State scored four runs in the first two innings, highlighted by a two-run home run by junior outfielder Andrew Crane. The Wildcats lead extended to 8-4 in the top of the sixth inning from a three-run home run by Murphy.

“Winning innings is a huge deal for us,” Morgan said. “Each of the nine innings is a game of itself and if we can play the game one inning at a time … we will be in a good spot to win that game.”

Their lead started to dwindle when the Wildcats gave up three runs in the sixth and seventh innings. After giving up four runs in five innings, sophomore Cody Gentry’s day was done. Gentry finished, allowing seven hits and having four strikeouts, but picked up his sixth win of the season to improve his record to 6-1.

In the sixth inning, Lyons was on the mound and he struggled. In the full inning and a half he pitched, Lyons allowed six hits and three runs which kept the game close for the Golden Eagles. 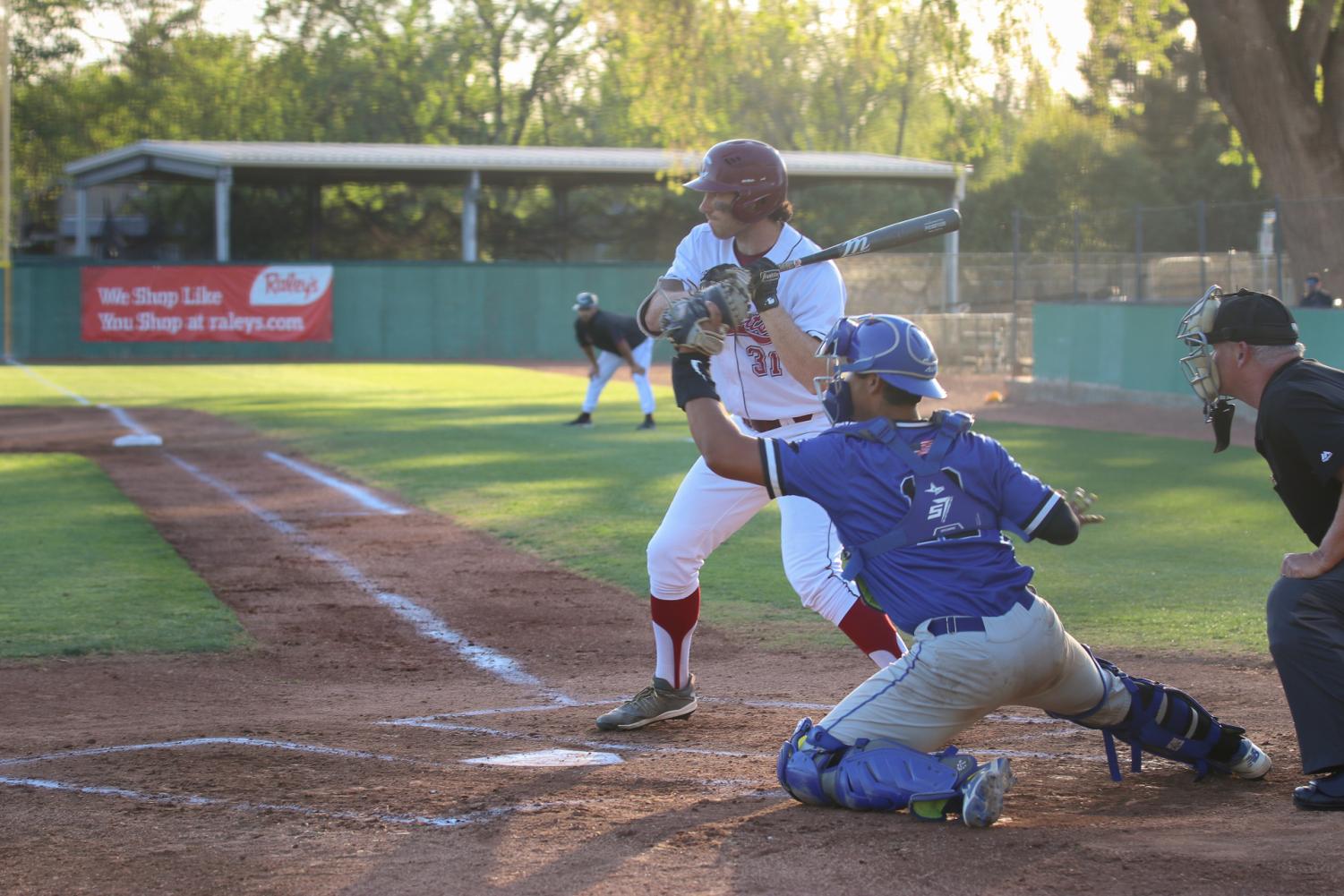 In the batters box, sophomore outfielder Grady Morgan chokes up on his bat waiting for the right pitch to hit. Morgan went 1-4 at the plate, scoring three RBI’s. 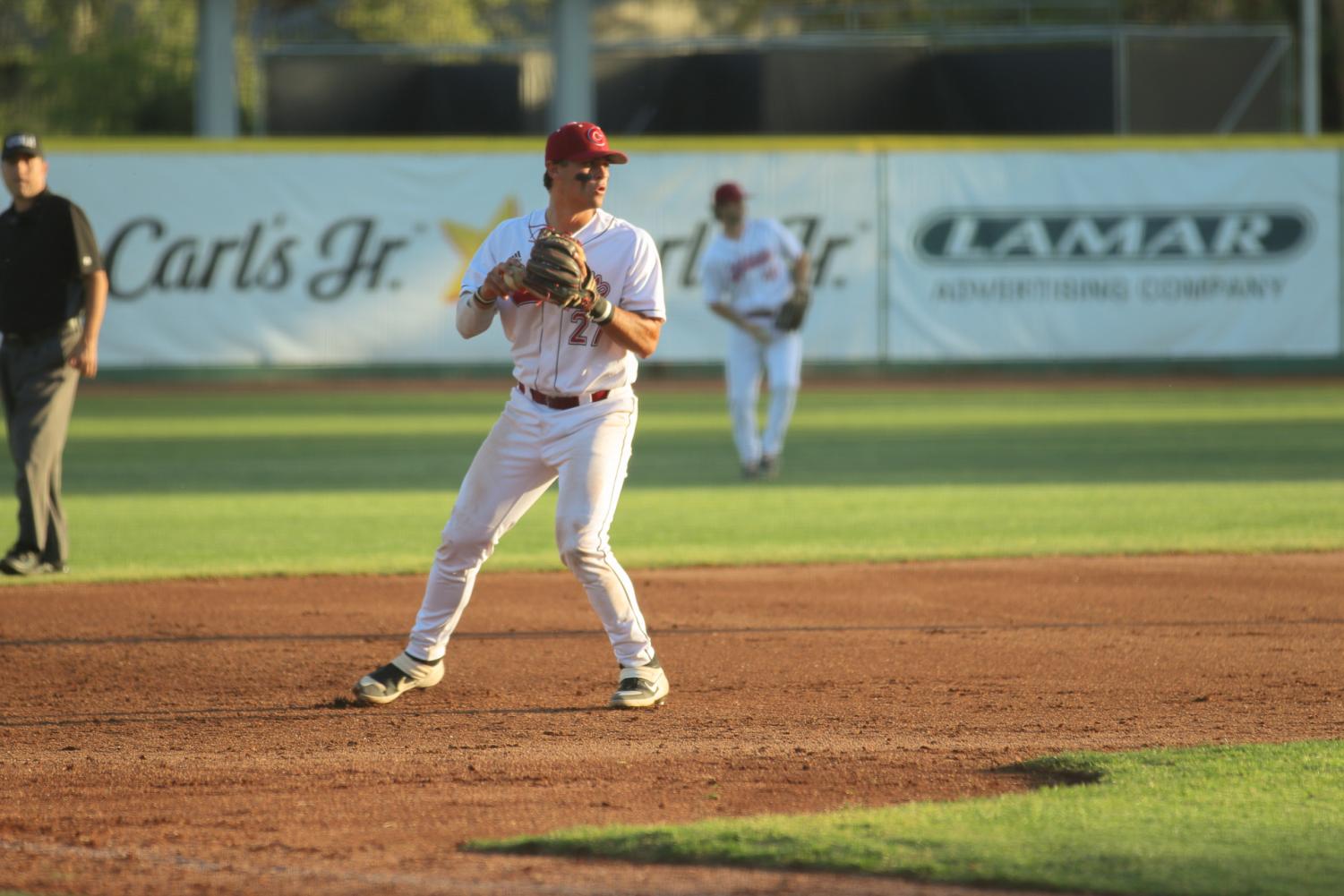 After fielding the ground ball, junior third baseman Jacob Jablonski is preparing to throw the baseball to first base to get the out.
Photo Credit: Alejandro Mejia Mejia

“I came in and didn’t come out of it as I had hoped,” Lyons said. “At that point we were all able to trust Josh [Verdon] … who was able to shut it down and we held onto that momentum.”

In the second game played Saturday, the Wildcats were defeated by the Golden Eagles in the extra-inning game. They lost 1-2 in the pitchers duel between sophomore Austin McFarlane and junior Owen Hunt.

In the shortened, seven-inning game, the Wildcats trailed 0-1 until Morgan stepped up to the plate and hit a double out to center field. This permitted freshman Ernie Arambula to score and took the game into extra innings.

“I was looking for a good pitch to drive to a gap and with a little help from a bad throw, we were able to score,” Morgan said.

Going into the top of the eighth inning, the Wildcats first three batters could not get any offense going, which led to a scoreless inning. The Golden Eagles had three hits and scored the game-winning run off a single down the right field line.

“The seven inning games are always a little different and it was great to see Austin have the outing he did,” Lyons said. “Ultimately, it came down to a couple important plays and we ended up on the wrong side of it.”

In the last game of the series, the Wildcats found their offensive stride, rolling past the Golden Eagles in a 14-2 win in what was an all-around performance for Chico State.

The Wildcats scored at least one run in seven of the nine innings, collecting 15 hits that day as a team. The offense was led by juniors Willie Lajoie, Jarret Lindsay and sophomore Morgan all having multi-hit games.

“We knew that if we scored first and that if we could score in multiple innings that they would fold, that was the goal,” Lindsay said. 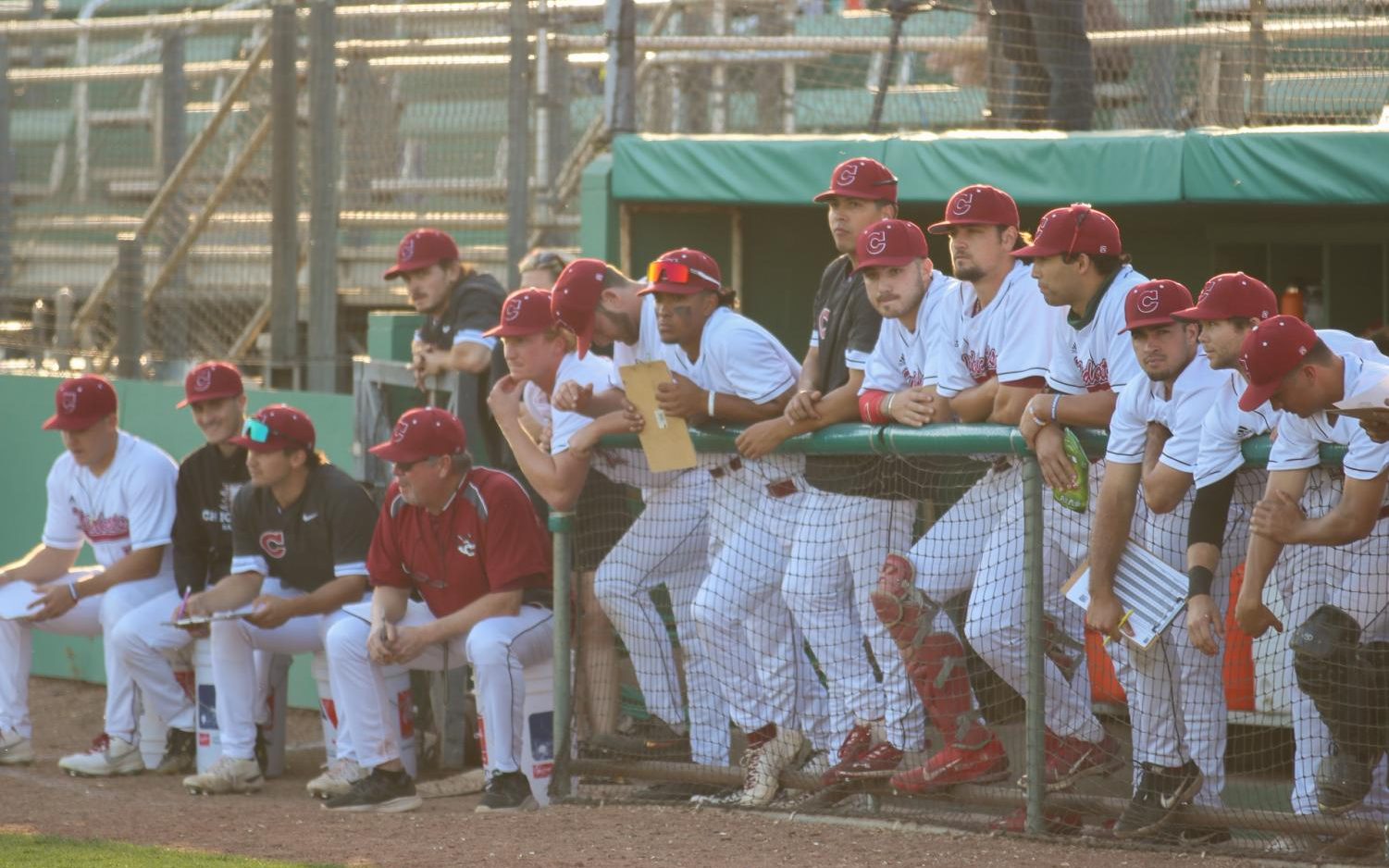 During the first inning, Wildcat players look towards the field watching the game against San Marcos.

“Our hitters gave us a pretty big lead early, so it allowed all of us pitchers to attack the zone with the fastball and let our defense play,” freshman pitcher Cayden Castellanos said. “It was easy to come in after watching Gowdy, Josh and Gerrit pitch well all game.”

After three dominant road wins, Chico State aims to keep the momentum rolling when they host Dominguez Hills (19-11) at Nettleton Stadium this weekend. The Toros are in third place in the CCAA conference standings with a 14-6 record.

“We’re looking forward to seeing a team at the top of the conference and seeing really where we are at,” Lindsay said.

The Wildcats currently rank in first place in CCAA conference play with a 18-5 record, with Monterey Bay only behind by half a game (18-6). The first game against the Dominguez Hills Toros will be at 6 p.m.For more information on Chico State Baseball and Wildcats Athletics, checkout the Chico State Wildcats homepage.