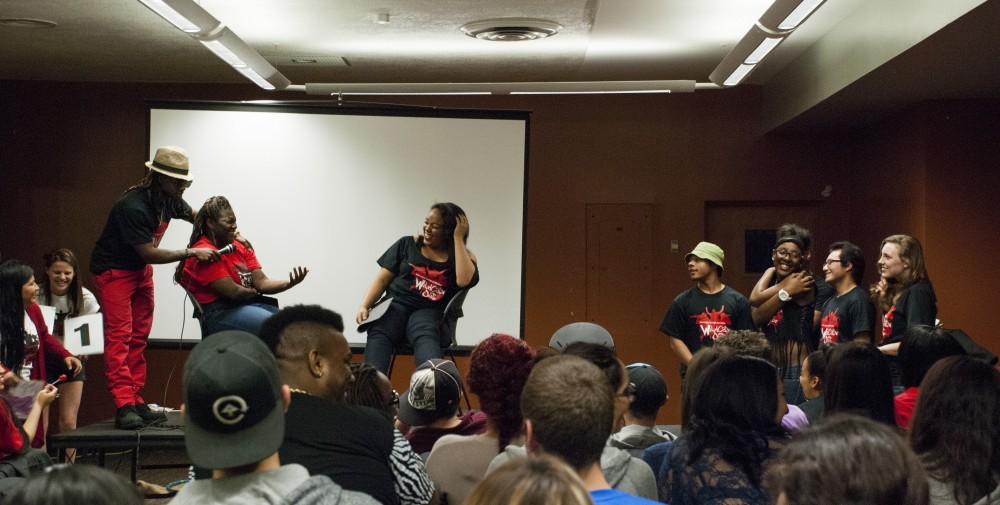 Both teams struggle to contain their laughter at Wild Cat'n Out Friday night on campus.Photo credit: Alex Boesch

“What did the father buffalo say to the younger buffalo?” said Deanna Jarquin, charismatic co-host for the event. “Bison!”

With this delightfully groan-inducing pun, the evening’s activities were underway.

The event was moderated by CCLC staff members Deanna Jarquin and Griselda Avila. Jarquin, a psychology and women’s studies double major, has worked with the CCLC since last August and described it as an amazing experience.

The energy of the performers was almost overwhelming. While the event started a little late, by the time it got underway at least 80 or 90 people were crowded into Selvester 100.

The people participating in the improv games were split into two teams, the Red Squad and the Black Squad.

The two teams competed in several different games either individually or as a group. They scored points in various ways, usually by making the audience laugh. The team with the most points in each game won that round and the team that won the most rounds by the end was the ultimate winner.

The evening started with a game called “Dictionary,” in which the performers had to make up amusing definitions for chosen words. As with many of the games, some of the examples were awkward and confusing, while many were met with raucous laughter.

Other games included increasingly raunchy attempts at flirting and the creative remixing of songs such as “Twinkle Twinkle Little Star” and “Mary Had a Little Lamb.”

Both teams exchanged witty comments and awkward silences throughout the evening.

The final showdown was a rap battle between various members of each team. While both groups had the audience roaring with laughter at times, the Black Squad proved to be the overall winner.

The evening concluded with a performance by The Chain Gang, a local rap and hip-hop group.

The event itself was met with primarily positive reception.

Jake Evans, senior exercise physiology major, was drawn into the action when he was called up on stage. Jake, who attended the event last year, commented on the raunchy nature of many of the jokes.

Wild Cat’N Out is one of the CCLC’s popular Late Night Lounge programs. Run twice a semester, these events are designed to give Chico State students a safe weekend activity that is still fun and enjoyable.

This particular event was the third in the Late Night Lounge series this year, following El Sol de la Noche and Hyped Hip-Hop.

The Late Night Lounge program was created after the university’s call to action regarding the growing number of alcohol-related incidents involving students, said Krystle Tonga, a Chico State alumna and assistant program coordinator for the CCLC.

David Kahn can be reached at [email protected] or @thatdavidkahn on Twitter.