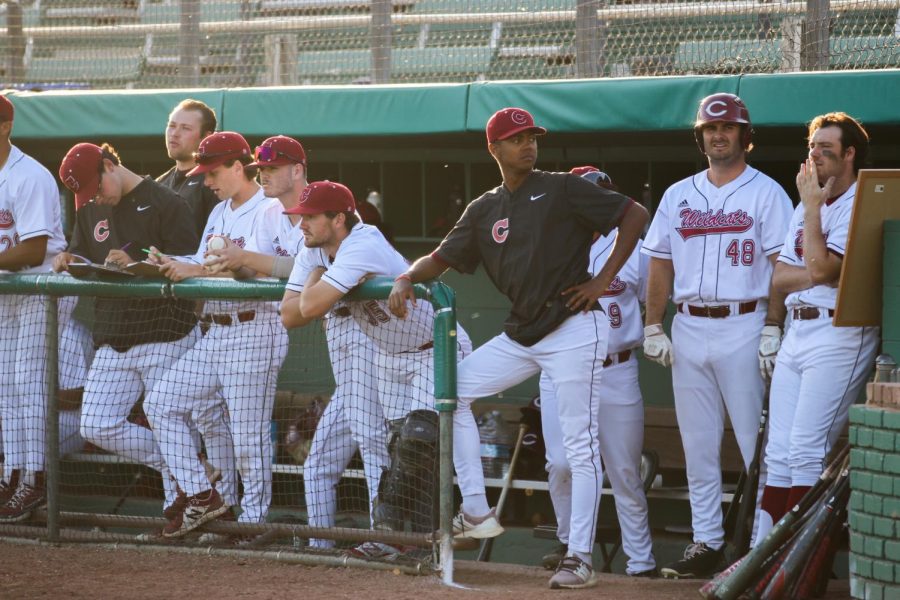 On March 25, a group of Wildcat players looks towards the field as they play the San Marcos Cougars at Nettleton Stadium winning 18-4.

In the first game of the series on Thursday, the Wildcats defeated the Coyotes 20-11, scoring 12 runs and totaling nine hits in the first inning alone. This forced the Coyotes to switch out senior starting pitcher, Jackson Gillmore.

“All I can say is hitting is contagious,” senior outfielder Jack Murphy said. “You see one guy hit a ball hard and the next guy is going to do that too … everything clicked for us that inning. It set the tone for the rest of the game.”

Defensively the Wildcats began the game with junior starting pitcher Rylan Tinsley on the mound. Tinsley picked up his fifth win of the season, improving his record to 5-0. Tinsley pitched a total of five innings, allowed six hits, four runs and earned three strikeouts.

The Wildcats consistently put more runs on the scoreboard throughout the game, with the help of their 20 hits in the game and seven players who had multi-hit games. The scoring ended for the Wildcats during the top of the ninth, with sophomore catcher Nathan Meredith hitting a three-run homerun.

“Tinsley was able to do his job,” Murphy said. “The bullpen was able to throw strikes which is all you can ask for when you have a big lead.” 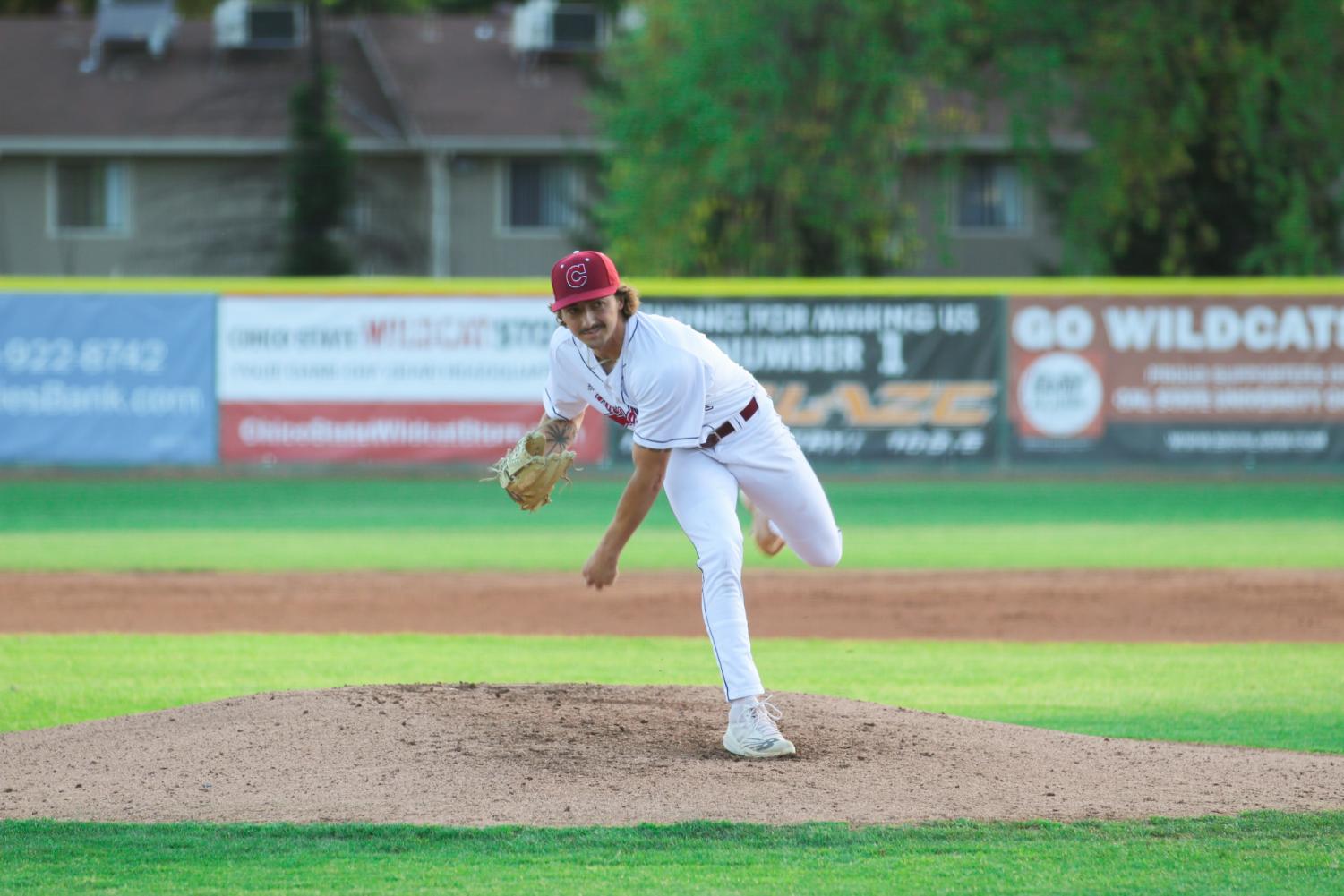 On the mound starting pitcher Rylan Tinsley is in pitching motion throwing the baseball towards a Cougar batter. 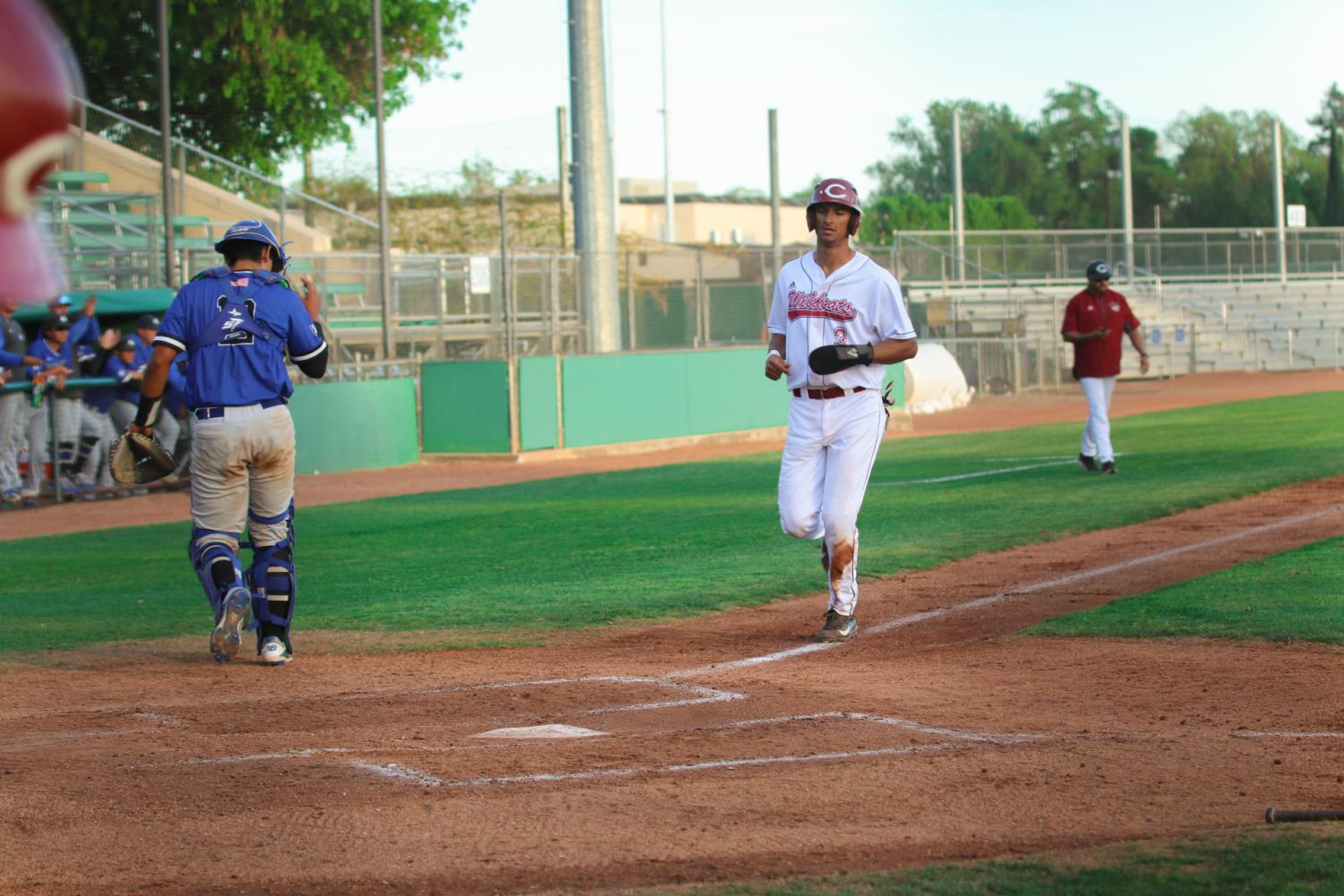 Jogging to home plate, sophomore Elijah Jackson looks to add another run to the 18-4 win. Jackson went a perfect 3-3 in the win over the Cougars.
Photo Credit: Alejandro Mejia Mejia

On Friday in the first game of the doubleheader, the Wildcats defeated San Bernardino 8-5 in a dominant comeback win after trailing 0-3 through the first three innings.

The offense started clicking in the fourth inning, scoring two runs highlighted by sophomore designated hitter Zach Morris. Morris smashed an RBI single out to left field and cut the Coyotes lead to one run. That game Morris went three for five, scoring one run and totaling two RBIs.

The Wildcats took the lead for the first time in the fifth inning by a three-run home run toward right field by sophomore outfielder Grady Morgan.

“Doubleheader days are long for us,” Morgan said. “So the fact that we were able to get some momentum early was a huge advantage for us.”

Head coach Dave Taylor kept the bullpen use at a minimum, with only one relief pitcher coming into the game to replace sophomore starting pitcher Cody Gentry. Gentry earned his seventh win of the year, pitching five full innings where he allowed three runs, four strikeouts and five hits.

In order to close the game out for Chico State, junior pitcher Josh Verdon pitched the last four innings of the game and picked up the save for the Wildcats.

“It definitely shifted the momentum of our team,” Morgan said. “Josh came in and gave us shutout innings to close the game which was huge for us.” 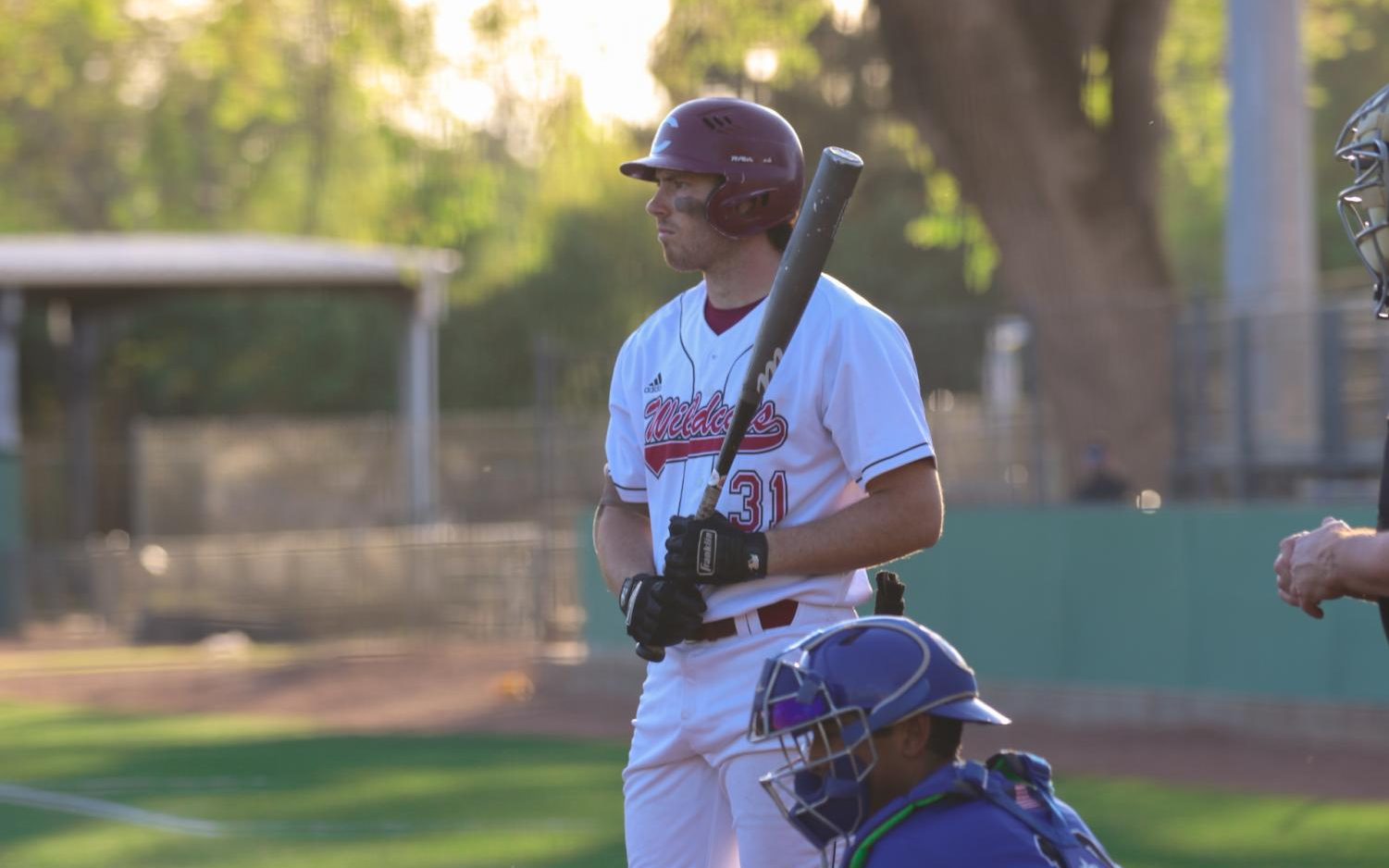 At home plate, outfielder Grady Morgan looks toward the third baseman coach. Morgan went 1-4 and got two RBIs in the 18-4 win.

In the second game of the doubleheader, the Wildcats lost to the Coyotes 7-10 with two errors, giving San Bernardino unearned runs in crucial parts of the game.

“We made some mistakes that cost us some runs,” said junior second baseman Jeffrey Ray. “We needed to move past that and just put one at-bat at a tie and we couldn’t really put it all together.”

In the bottom of the first inning, with a 2-0 lead, the Coyotes tied the game off of a throwing error made by junior third baseman Jacob Jablonski. Following the Coyotes tying the game, San Bernardino gained the lead 2-4 by redshirt junior infielder Kyle Csakan.

The Wildcats showed defensive struggles in the bottom of the third inning. The Coyotes had a runner that reached on a fielding error, which led to San Bernardino hitting a three-run home run that gave them a 7-2 lead in the third inning.

The Wildcats had no shortage of offense, having a total of 14 hits, but their comeback effort ultimately fell short.

“I felt like we were a couple at-bats from getting back into that game and winning but the ball just didn’t roll our way,” Ray said.

After getting thrown the ball, first baseman Willie Lajoie makes sure that he has control of the ball to get the out. 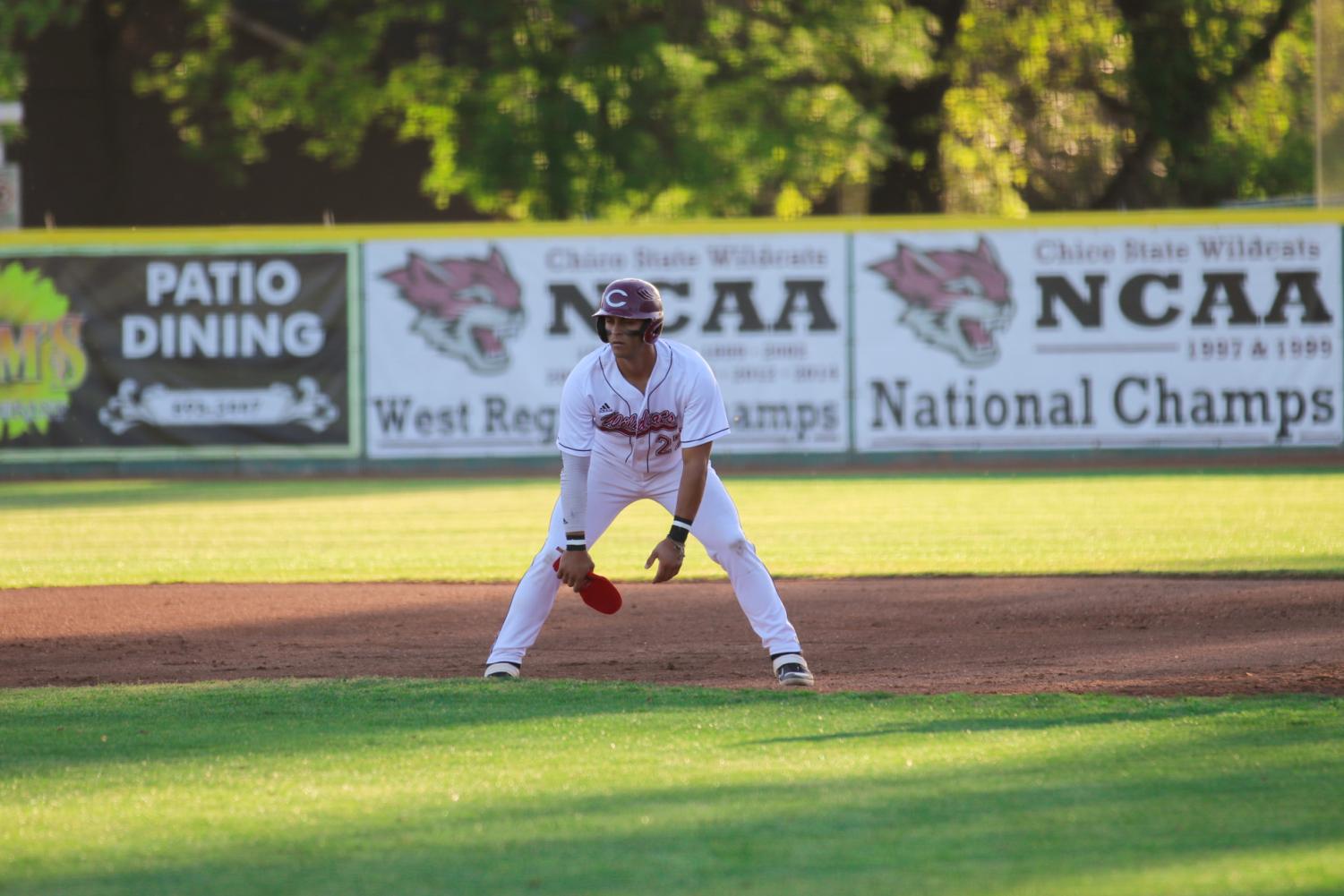 On Saturday in the final game of the series, the Wildcats struggled to find any sort of offensive strength losing 2-7. Junior starting pitcher Braeden Gowdy had a short outing, allowing a total of six runs in the span of the two full innings he pitched.

“Gowdy is our best arm and we always expect him to give us his all,” sophomore pitcher Kevin Lyons said. “This was a rare case when I had to do my job and keep the game close to give the offense a chance to get back in the game.”

The Wildcats struggled in the final game Saturday, only having a total of seven hits as a team, leaving runners on the bases and unable to score.

“We struggled on the mound and on defense,” Lyons said. “I think the group can agree the weekend would have gone a lot differently if we took care of business in these two aspects of the game.”

Following the series against the Coyotes, the Wildcats moved down to second place in the CCAA conference with a 22-9 record. The next series will be important to the conference standings with Chico State hosting the first place (30-11) Monterey Bay Otters at Nettleton Stadium starting Friday, April 29.

“I think we have a lot to focus on, we’re going to use this time to get healthy before one of the biggest series of the season,” Lyons said. “We haven’t played our best baseball in the past two weeks and there is going to be a large focus on our pitching and defense to make sure it gets where it needs to be to win a conference championship.” 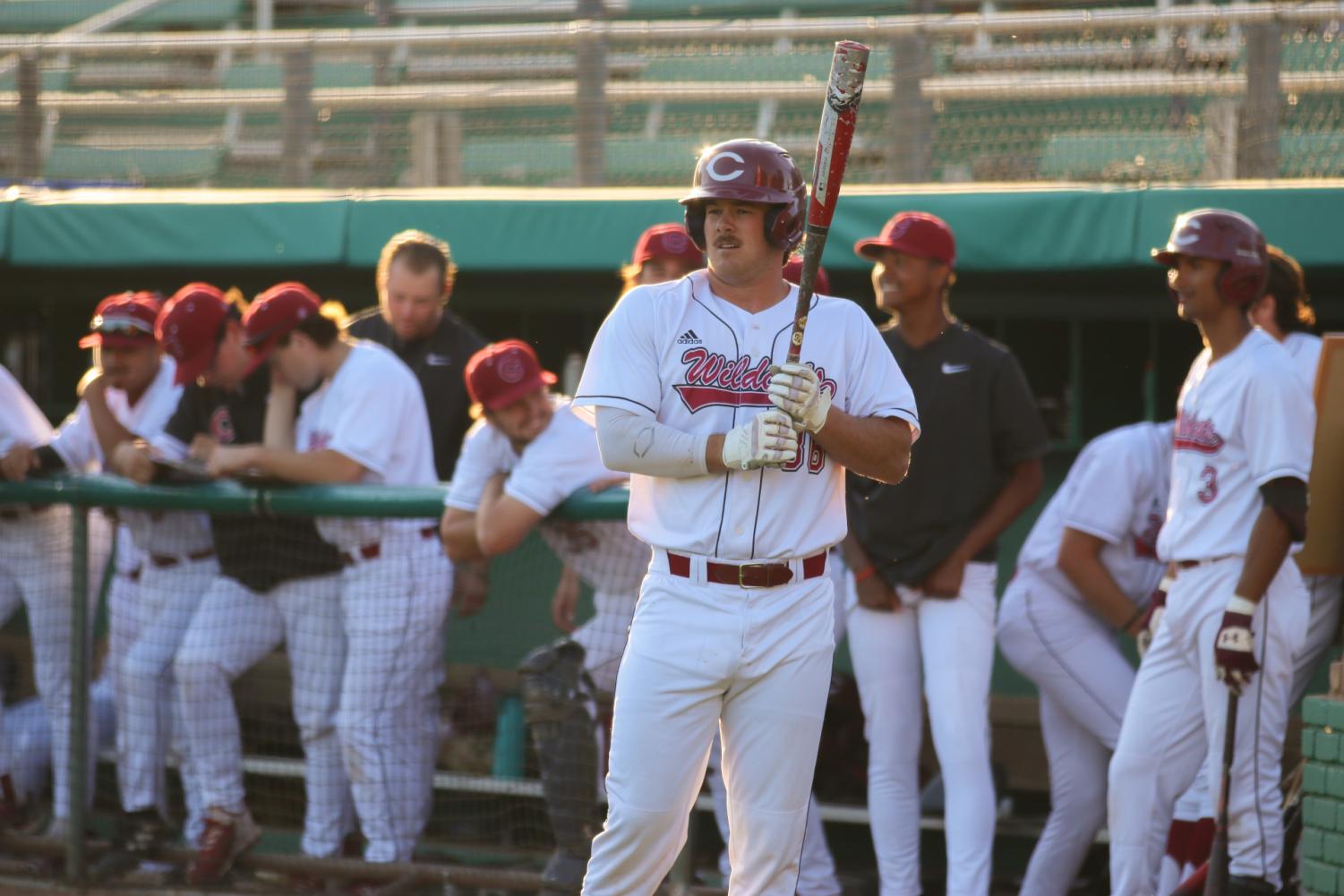 Before entering the batter’s box, Zach Morris waits for the current at-bat to be completed. Morris went 1-2 at the plate. 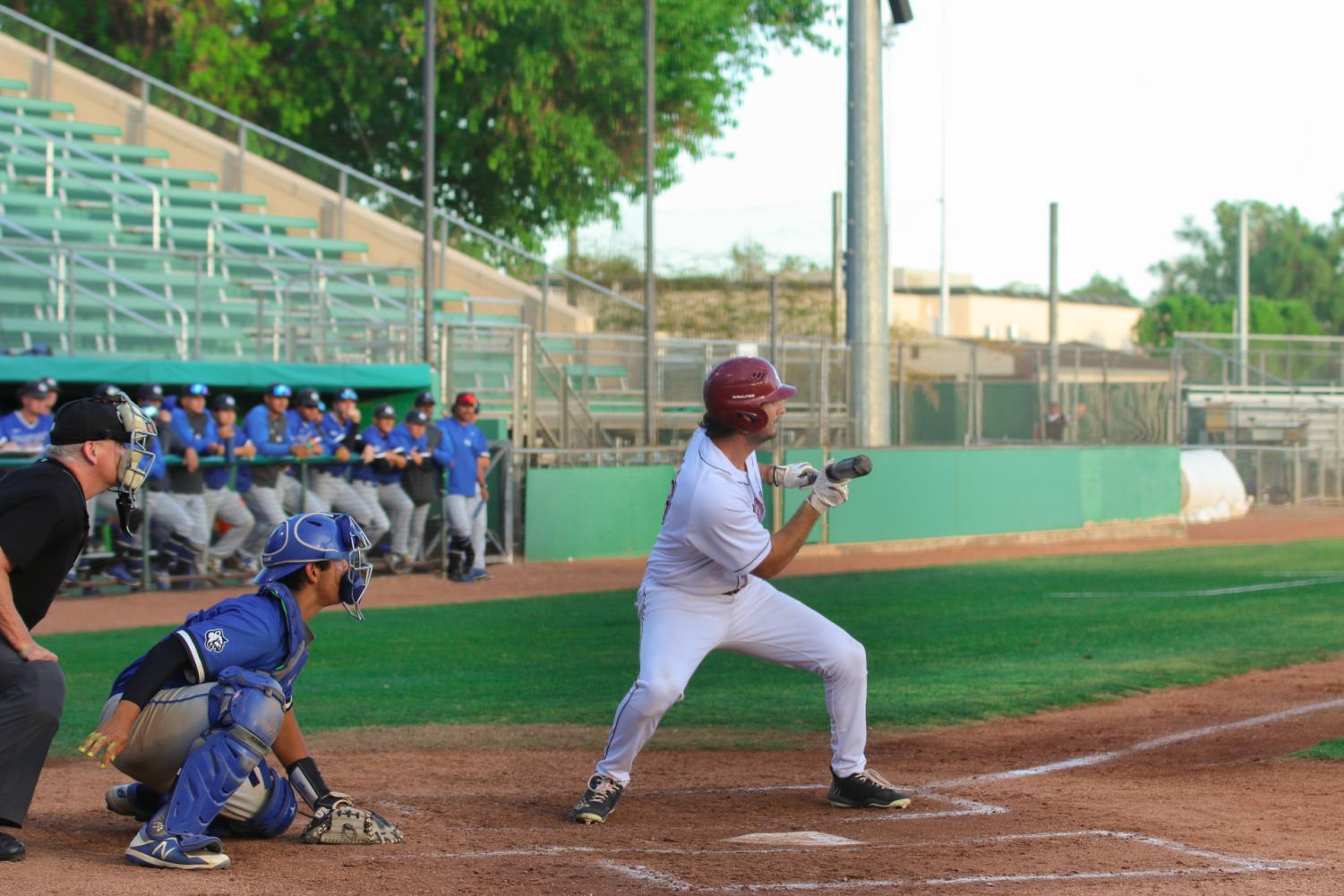 In the right-handed batter’s box, outfielder Kyle Dobson is dropping a bunt to advance the runner to first base.
Photo Credit: Alejandro Mejia Mejia