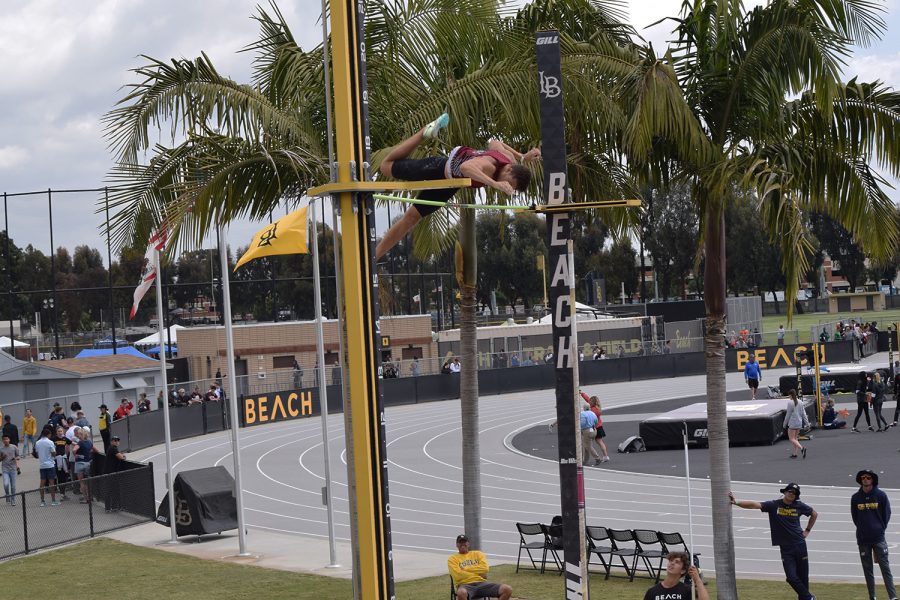 Cristian Brady’s journey began at South Hills High School when he failed to make the baseball team and had some decisions to make. As they say, where one chapter ends, another begins. After this happened and realizing he didn’t want to play football anymore, Brady’s family members convinced him to give track and field a try.

“I have had family members do great at pole vault, and realized this might be my chance to play collegiate sports,” Brady said.

Young Brady didn’t realize how much this decision would pay off for him going forward. After high school, Chico State Men’s Track and Field Head Coach Oliver Hanf gave Brady the opportunity of a lifetime to become a Wildcat.

As sweet as this fairytale-story sounds, there were some bumps in the road for Brady. Due to COVID, he wasn’t able to compete. He had to wait for the 2021-22 season to get started.

Chico State Track and Field Pole Vault Coach, John Brunk, said Brady coming back for another year is a testament to him as a person.

“COVID prevented Cristian from achieving the big goals we had set,” Brunk said. “We talk about victory laps, and he came back for his final one and is hitting the stepping stones for the ultimate goal.”

Brady came out swinging like a champ, in his second meet of the year at the Kim Duyst Invitational at Stanislaus State, he hit the NCAA Division 2 Provisional Qualifying Mark for Pole Vault. Meaning his 16-feet-1.75-inch vault (4.92m) was a good enough mark to qualify him for nationals at the time.

Brady was excited to hit the mark but knew there was work to be done to assure a spot in nationals.

“That first provisional mark wasn’t satisfying me, I knew I had to do better,” Brady said. “The season isn’t over, I am hungry for more.”

Hungry he was indeed, at the Long Beach Invitation Brady reached new heights no one ever has in the white-and-cardinal uniform. Brady broke a 30-year-old record held by Frank Lines.

Brady cleared 16-feet-9.5-inches (5.12 meters), which launched him into the best pole vault jump in Wildcat history. This would also rank him 10th in Division 2 for pole vault and would push him over a foot and a half over fellow rival California Collegiate Athletic Association pole vaulters.

Brunk said this is the standard Brady has set for himself after showing his work ethic day in and day out.

“He is one of the hardest workers on our team,” Brunk said. “He doesn’t make excuses and just puts the work in.”

Brunk said this moment was coming for Brady as he was clearing some big numbers in practice.

“We all knew the jump was ready, we had the opportunity and he killed it,” Brunk said.

Brady said it felt great to hit this mark, but the season isn’t over and there is time for bigger things.

“It was great, but I have to get back to work,” Brady said. “I have the CCAA Championships coming up and then compete for the national title.”

Brunk said this is a feasible goal, as Brady is just scratching the surface of his potential, which is scary considering he has qualified for nationals and just broke the Chico State Pole Vault record.

“We all know he is just starting,” Brunk said. “He just needs to keep trusting the process and great things will continue to happen.”

Jorge Barajas, current thrower for the men’s track and field team said seeing Brady succeed is inspiring and radiates onto the whole team.

“We have a big ohana sign that we take to every meet and seeing how happy the team is after another athlete excels really shows that we’re all a big family,” Barajas said.

Brady and his fellow Wildcat teammates currently have the opportunity to embark on a potential deep postseason run. It first starts with the CCAA Track and Field Championships on May 5- 7 at San Francisco State. After that, athletes get a last chance to qualify for nationals either at Azusa Pacific or Stanislaus State  in the “Last Chance” meet from May 13-14.