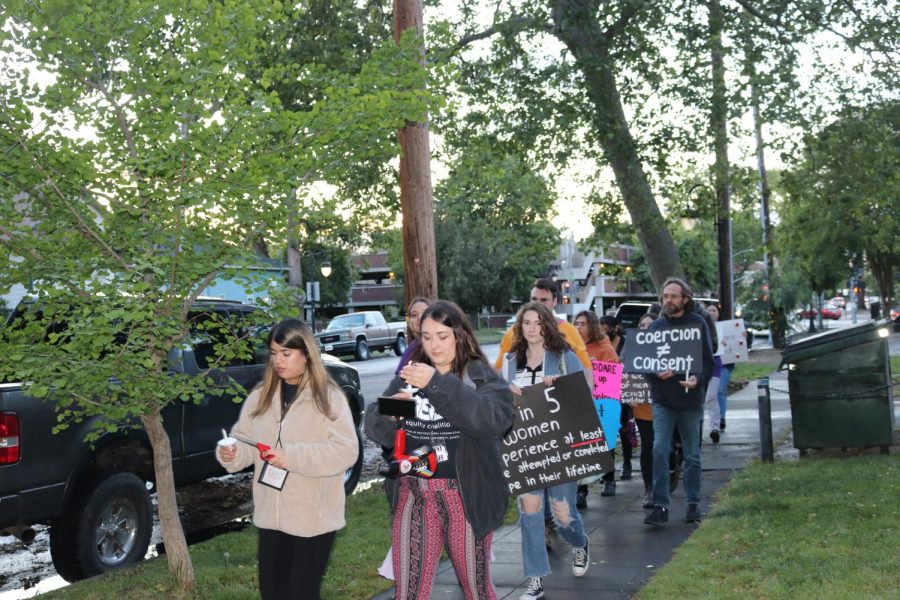 The evening sun had just begun to peer through the clouds as a collective of students and community members marched silently, with the exception of the occasional splash — a result of the occasional misstep into a puddle. The activists donned solemn faces as they trekked down Ivy Street in silence, part of their mile-long march, receiving looks from drivers and bar-goers.

The 18 marchers took to the streets with candles flickering to participate in the annual Take Back the Night march, an international event with the goal of ending sexual and domestic violence against women. The march was done in silence, out of respect for those who have lost their lives to sexual violence.

Coordinated and led by the Gender and Sexuality Equity Coalition, the march took place April 21. 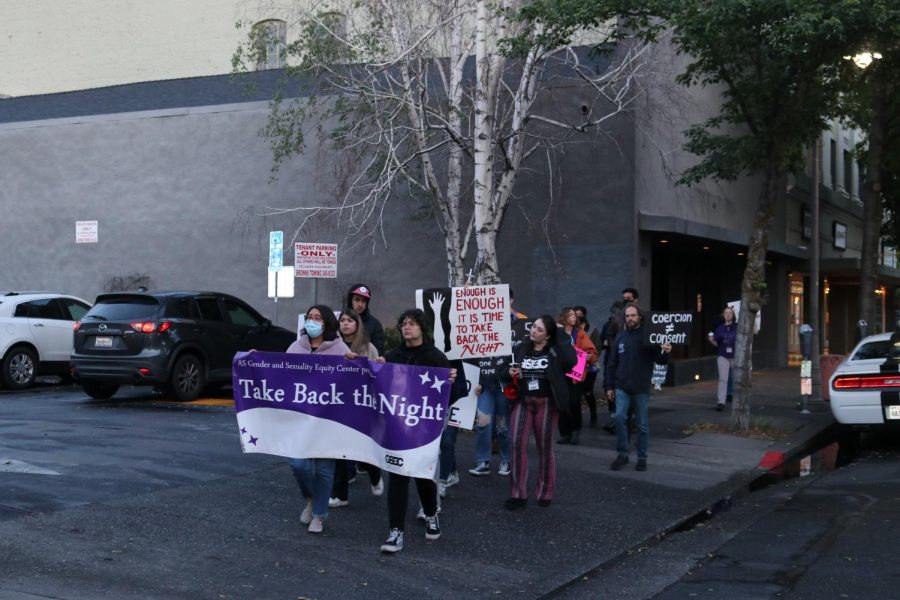 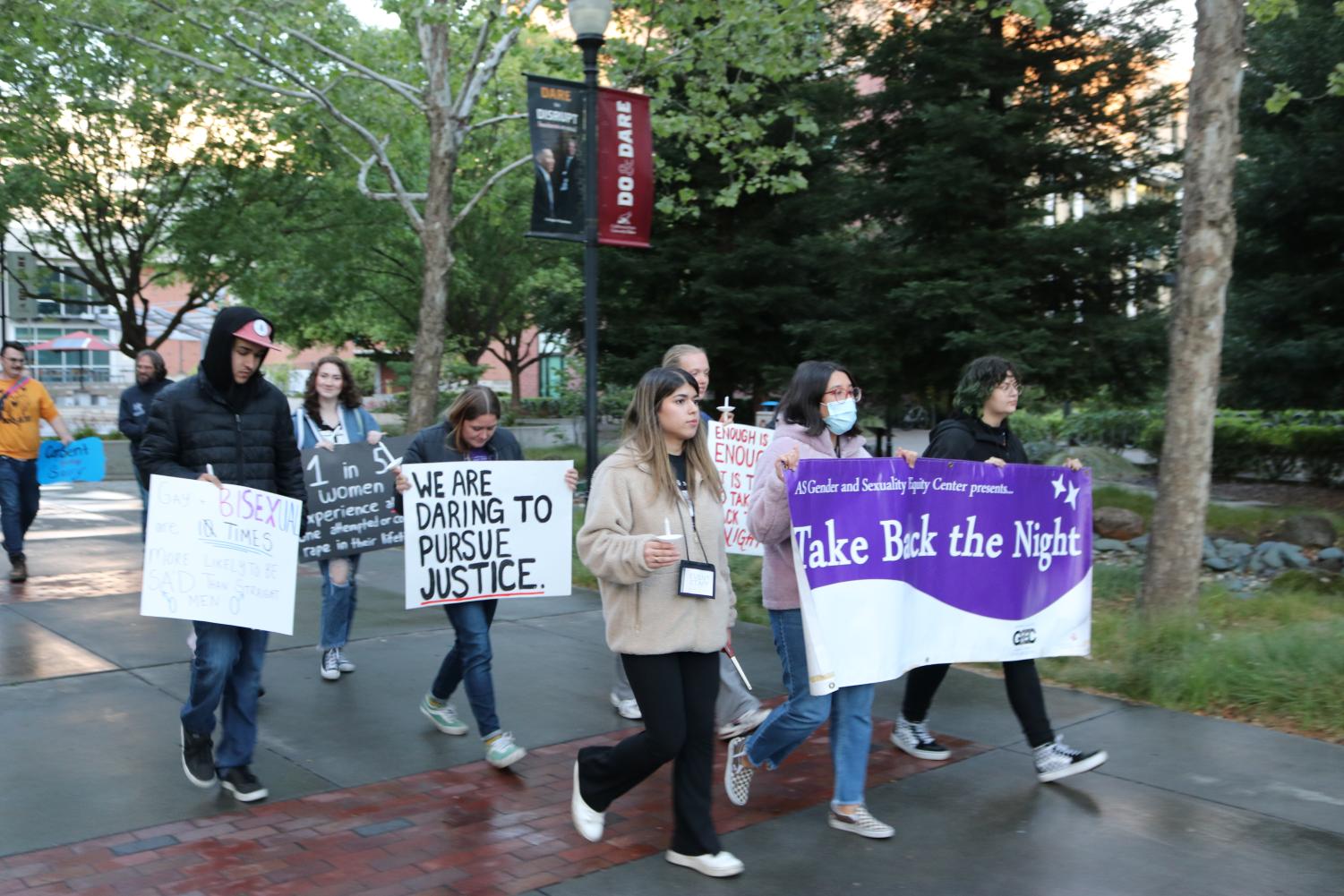 Morgana Gorre-Clancy, fourth-year student and GSEC program coordinator, said the goal was to spread awareness and to create a safe space for those in need.

“We are trying to bring awareness to the sexual assault against students, both on our campus and in the community,” Gorre-Clancy said.

The main idea behind the march is that students everywhere participate at the same time, standing together to protest sexual violence.

The route itself has meaning to it as well, taking the activists down frat row, by several bars and through downtown. 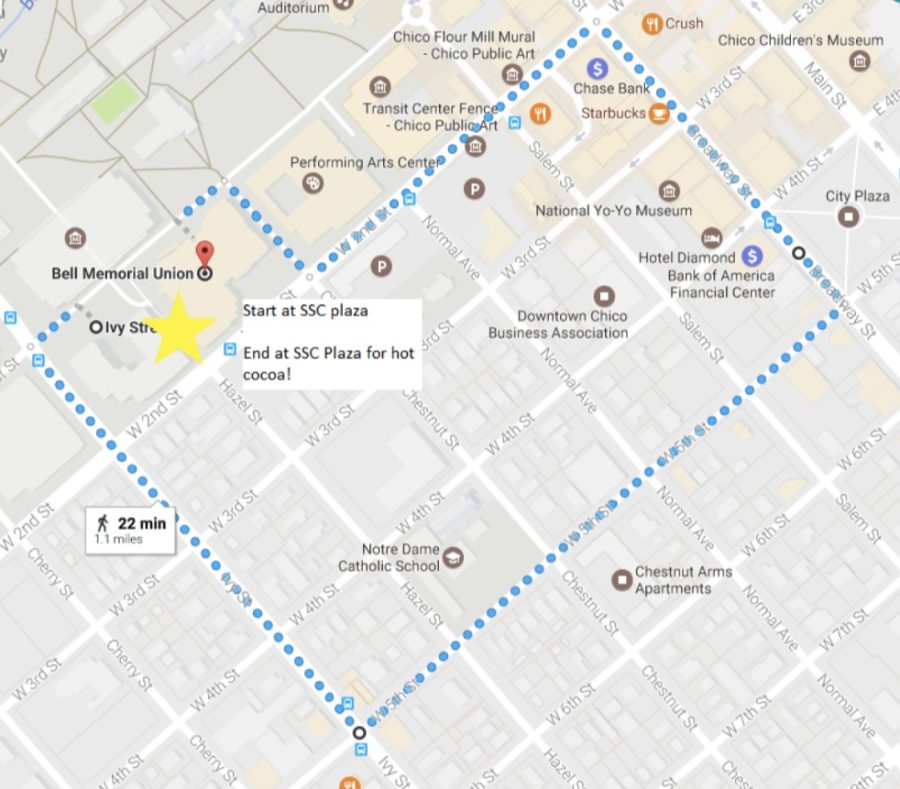 The route for 2022’s Take Back the Night march. Image courtesy of GSEC.

“It’s that message that these are the places we are allowed to take up space, and we should be allowed to go out at night and not be super worried or scared to do that,” Gorre-Clancy said.

Take Back the Night has always been a primarily college-led event, both domestically and more recently — internationally. Its origins came from female students who wanted to bring awareness to the sexual violence and assault common on college campuses throughout the early 1970s. 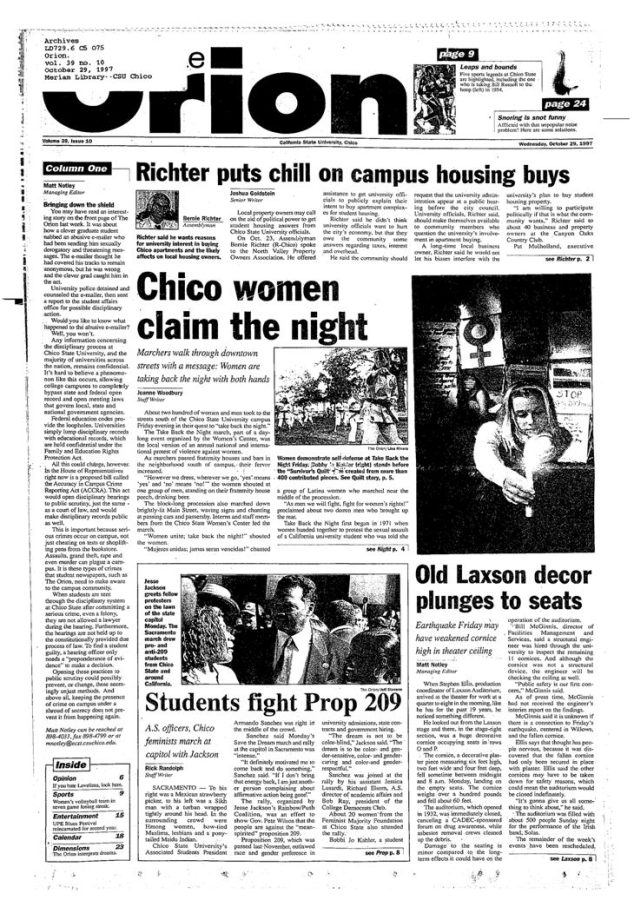 Take Back the Night has a rich history at Chico State, dating back to the early 1980s. This Orion article is from 25 years ago, 1997. Obtained from The Orion archives

Even though the project started off as oriented toward women, it eventually expanded to the queer community. That’s where GSEC eventually came in, emphasizing that the march is for all victims of sexual violence regardless of their gender.

“I was aware of Take Back the Night because I kinda grew up with like a huge feminist mom and she had a whole bunch of T-shirts from when she did it in college,” said Gorre-Clancy. “So it’s kinda like something where when we were picking our events I was like, ‘I’m gonna do this event.’”

However, for GSEC this event is about more than just a march. They see it as an opportunity to create a space where survivors in the campus community can safely share their experiences. In the days leading up to the event, GSEC tabled and displayed their Clothesline project on Glenn Hall lawn, handing out information, condoms and pads. 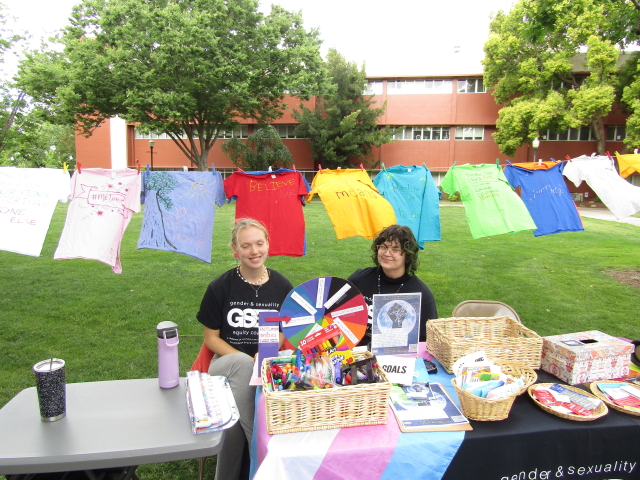 Additionally, prior to the march, GSEC hosted survivor speak outs in the Bell Memorial Union auditorium. Gorre-Clancy kicked off the series at 5:30 p.m., sharing some of her experiences and introducing the four speakers leading the survivor speak outs.

After the four survivor speakers were introduced, the audience split up into small groups of five to eight, and followed a survivor speaker of their choosing. Each group was able to go to a separate safe space, listen to their speaker’s experiences and share their own experiences if they so desired.

This permitted anyone and everyone to speak about their experience with sexual violence or assault in a supportive, judgement-free and confidential setting. Attendees also wrote about what Take Back the Night means to them and why they march.

After about an hour, everyone returned to the BMU auditorium where they could speak with vendors who provided additional resources, including WellCat Safe Space, Catalyst Domestic Violence Services, Rape Crisis Intervention and Prevention and Damsel in Defense. The march then kicked off around 7:30 p.m., with the 18 students beginning in the Student Services Center Plaza. 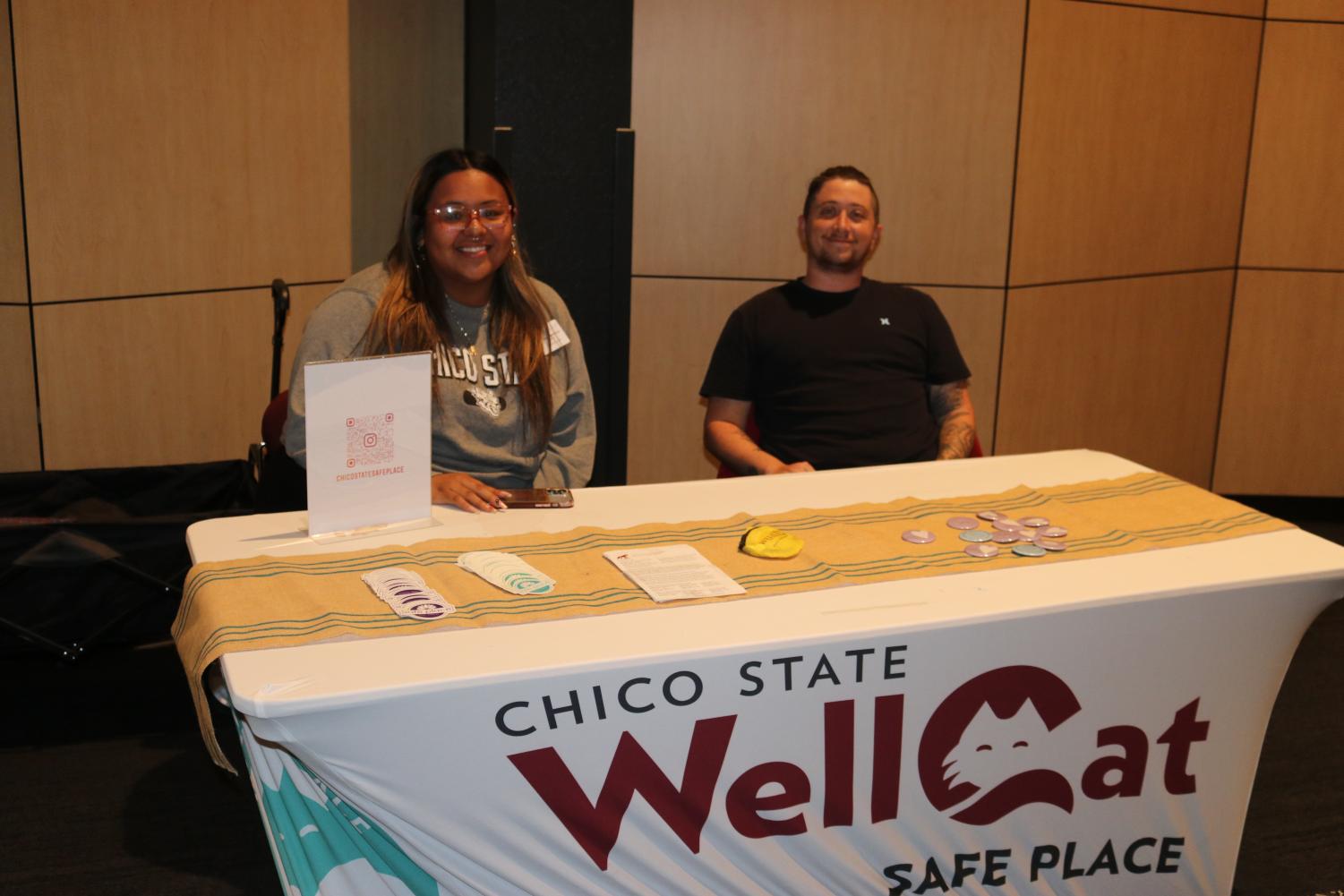 Students Kiara Castanon and Sawyer McAvoy share information about WellCat Safe Space in the BMU prior to Take Back the Night. Photo taken April 21. 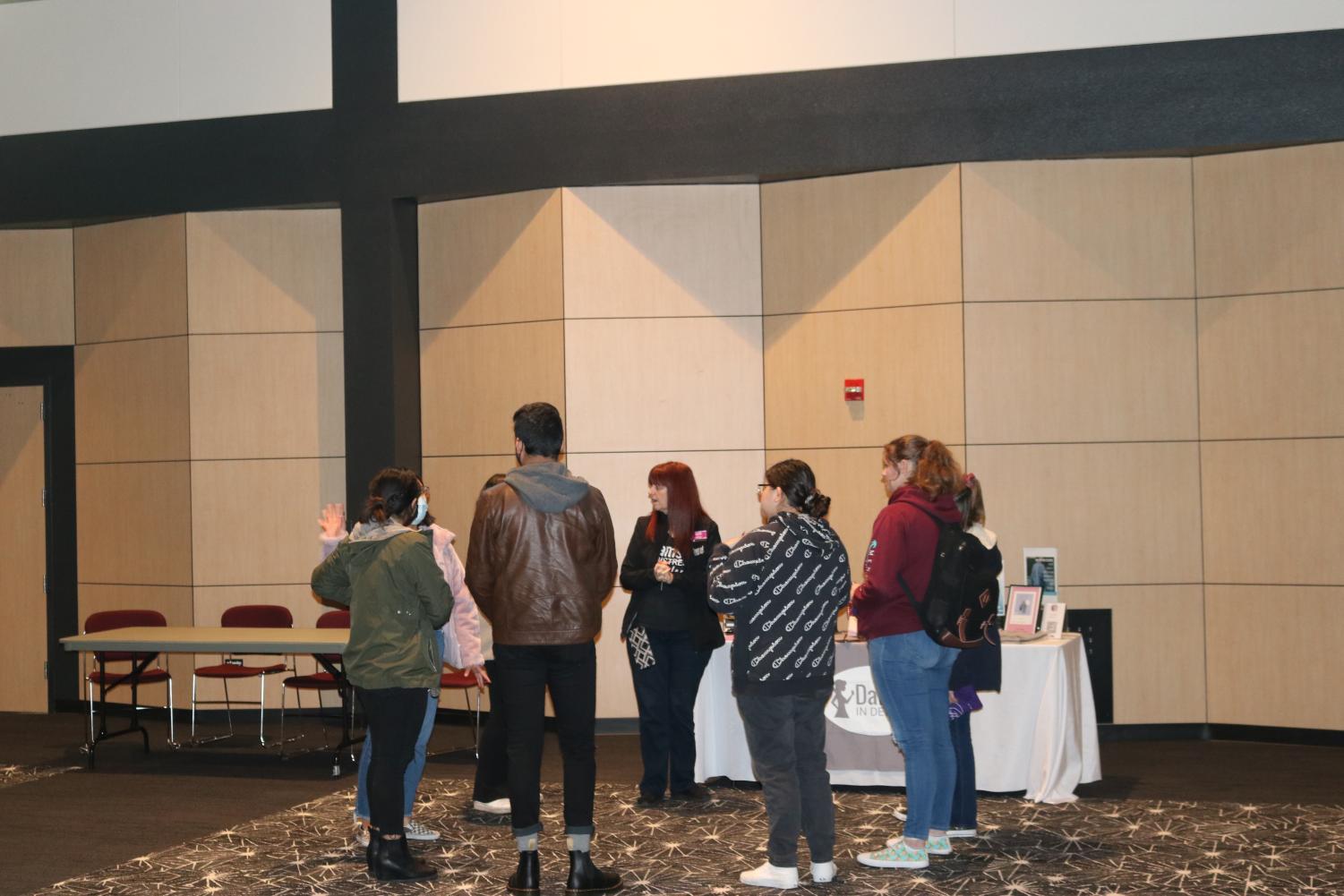 Several attendees speak with a Damsel in Defense representative in the BMU prior to the march. Photo taken April 21.

GSEC members and students received honks, applause and cheers as they marched their way through downtown.

Wildcat and GSEC intern, Jade Jones, hoped the event would have attracted more students, but largely blamed the poor weather for the smaller crowd. However, Jones did feel glad knowing that they helped ensure survivors remained visible and that they had created “a safer place for people to share their stories.”

Despite the small turnout and some initial weather concerns, Gorre-Clancy was happy with how the march went and that everyone managed to stay dry.

“It’s really difficult in our area, a lot of people aren’t necessarily connected with our kind of politics and advocacy that we’d like, but we do have a huge community that are like under the floorboards, but they always come out and they help support us,” Gorre-Clancy said. “But for our community, I think our turnout is pretty good.”