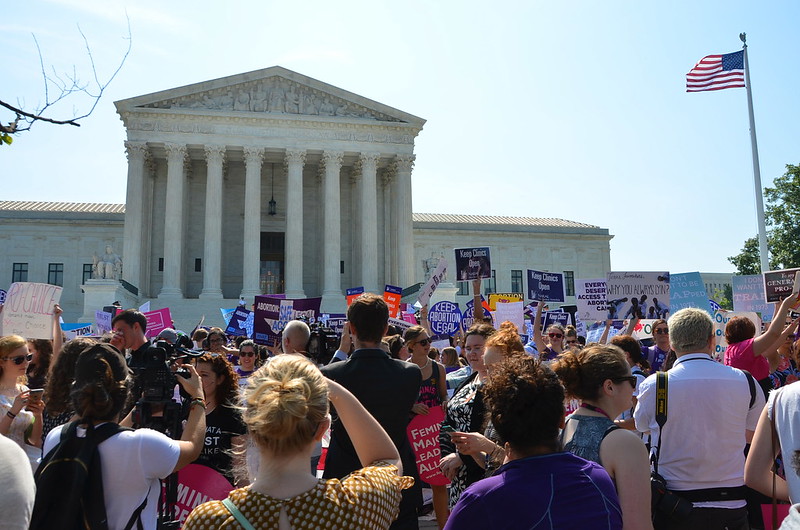 "Awaiting the decision" by afagen is marked with CC BY-NC-SA 2.0.

Politico announced on May 2 that it obtained a U.S. Supreme Court decision draft that would overturn the 1973 ruling of Roe v. Wade, and the 1992 ruling of Planned Parenthood v. Casey.

“Our daughters, sisters, mothers, and grandmothers will not be silenced. The world is about to hear their fury,” California Gov. Gavin Newsom tweeted. “California will not sit back. We are going to fight like hell.”

California will propose an amendment to “enshrine the right to choose,” within the state Constitution to legalize the right to an abortion.

Our daughters, sisters, mothers, and grandmothers will not be silenced.

The world is about to hear their fury.

California will not sit back. We are going to fight like hell. https://t.co/EhwSWXiZhx

Speaker of the House Nancy Pelosi issued a statement criticizing the court’s draft.

“The Republican-appointed Justices’ reported votes to overturn Roe v. Wade would go down as an abomination, one of the worst and most damaging decisions in modern history,” Pelosi said.The Roe v. Wade decision concluded that blanket bans on abortion deprived people seeking abortion of their due process rights under the 14th Amendment. It also concluded that “the abortion decision in all its aspects is inherently, and primarily, a medical decision, and basic responsibility for it must rest with the physician.”

Planned Parenthood v. Casey affirmed the ruling of Roe v. Wade regarding due process, but changed the ways that states may define fetal viability when crafting non-blanket restrictions, and set a precedent where states may not place an “undue burden” on those seeking abortion services.

The draft opinion, authored by Associate Justice Samuel Alito, claims that the Roe and Casey cases were decided incorrectly, and concludes that:“The Constitution does not prohibit the citizens of each State from regulating or prohibiting abortion. Roe and Casey arrogated that authority. We now overrule those decisions and return that authority to the people and their elected representatives.”

Politico, citing an unnamed source close to the court, says that Alito was joined by Clarence Thomas, Neil Gorsuch, Brett Kavanaugh and Amy Coney Barrett, all of whom were appointed by Republican administrations.This draft is not an official ruling. Votes and arguments may change before the court releases the final opinion, which is expected in late June when the court’s term typically ends.

*This article will be updated as events continue to develop.

Christopher Hill and Ava Norgrove can be reached at [email protected]