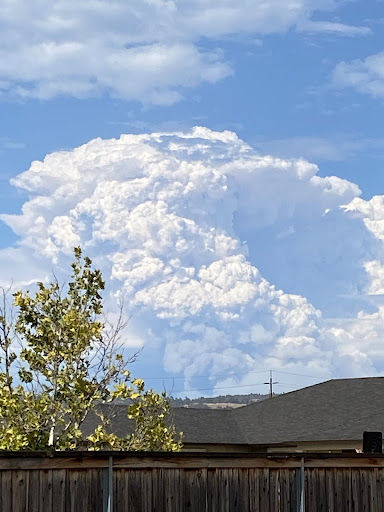 An early start for Northern California’s fire season is expected to begin sometime this month. This can be attributed to an early drying season due to our lack of rain, paired with above-average temperatures for May through August, and a possible above-average monsoon season, increasing the risk for dry-lightning.

Even with the recent rain and snow Northern California has received, it was not enough to delay our fire season. Fuel flammability is increasing once more in the Sacramento Valley, while drought conditions continue to worsen. The latest report from North Ops paints a bleak picture, yet again. May and June are expected to be the transition months for the extended dry period. Critically dry wind events are also expected to be prevalent in May and June, which would increase fire danger. Furthermore, they will also continue to dry out vegetation. 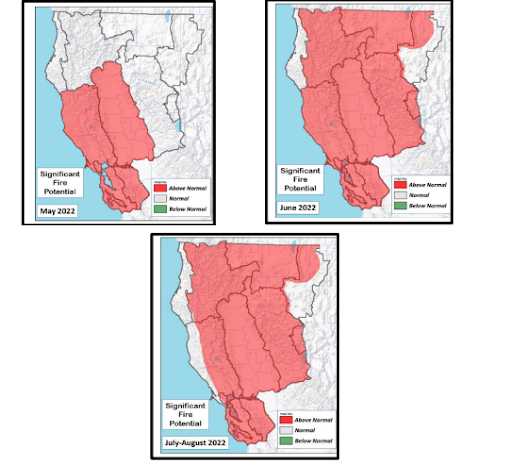 Graphics from North Ops for significant fire potential between May-August.

The signs are all there, and they point toward an early and significant fire season. Any robust, monsoonal moisture plume that makes its way north will bring significant impacts to our region, similar to that of the 2020 fire season, which saw numerous wildfires and lightning complex fires, including the Bear Fire that killed 16 people and destroyed the towns of Berry Creek and Feather Falls.

While our recent rain and snow, as mentioned previously, helped in the short term, the long term will not be affected positively. Our water deficit is too great to have any meaningful impact, and fuel moisture levels are already beginning to fall again. They will continue to fall as forecast models show above-average temperatures returning, coinciding with wind events that will further cure vegetation, for both dead and live fuel.

Another factor is that the April rain likely prompted additional growth of vegetation in the middle elevations, especially in the foothills and upwards of 1,500-2,500 feet or higher. This will then increase the likelihood of additional vegetation that could burn, should any fires start.

My outlook hasn’t changed much since my first article just over a month ago, where I predicted our first large wildfires would pop up in mid-to-late May. However, the Sacramento Valley will have extended above-average significant fire potential through the summer, whereas previous reports indicated it would decrease through the summer months.

The monsoon season will be a nuisance to us, especially come late June and into July. If we get anything similar to the Lightning Siege of 2020 here in Northern California, it would be extremely problematic for us. The combination of very low fuel moisture and high fuel flammability, mixed with high temperatures and dry lightning will cause critical, and occasionally extreme fire conditions.

Now is the time to prepare for the rapidly approaching fire season, especially for those who live in the Wildland Urban Interface, which is a zone of transition between wilderness and land developed by human activity. An example of a major WUI event was the 2018 Camp Fire, which saw a wildfire turn into a WUI event, then ultimately led to a fully fledged urban firestorm in Paradise. Areas similar to Paradise are at great risk for catastrophic wildfire events.

Building defensible space is a major factor in protecting your home, along with devising plans in the event of an evacuation. Having a Go Bag is essential, and assembling one prior to wildfire season is essential in making a quick exit if notified. 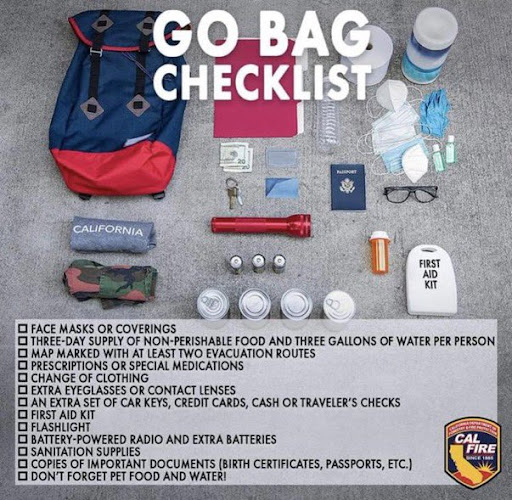 A checklist provided by Cal Fire.

One of the more important tips: Prior to a mandatory evacuation, take photos and video of everything inside, and outside your house for insurance purposes. The absolute most important tip is if you feel threatened by a wildfire and haven’t received any law enforcement notification of evacuation, you are your best official. Trust yourself, as it is better to be safe than sorry.

We have already seen massive wildfires in other parts of the country, especially in Texas, New Mexico, Arizona, Kansas, Nebraska and Oklahoma. California’s wildfire season is very near. It’s best to be prepared early and to be informed so you can be better prepared in the event of large wildfires.

Michael Steinberg can be reached at [email protected] or