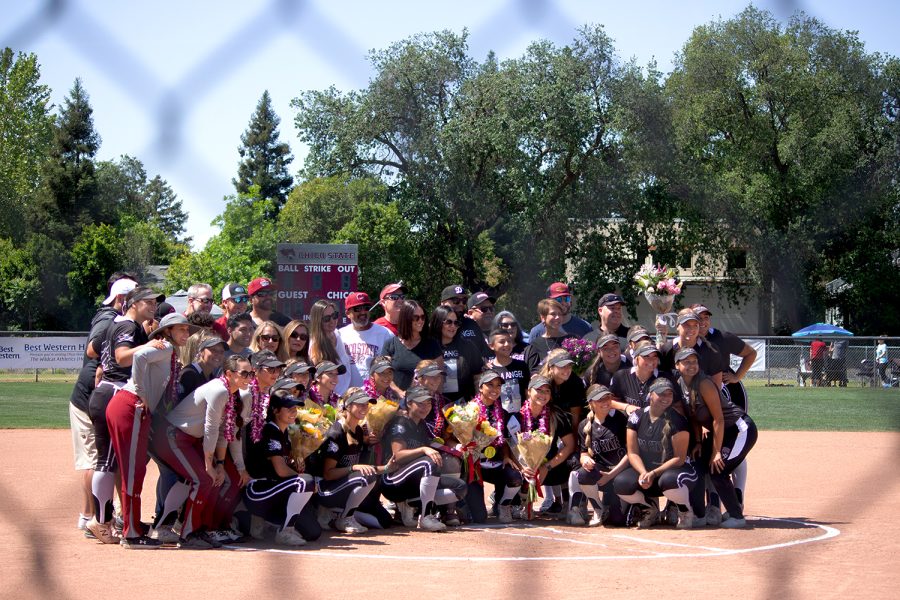 The Wildcats celebrating their seven seniors

No. 24 Chico State Softball hosted the Sonoma State Seawolves at University Softball Field from April 29-30 in their last series of the regular season, coming away with a draw. 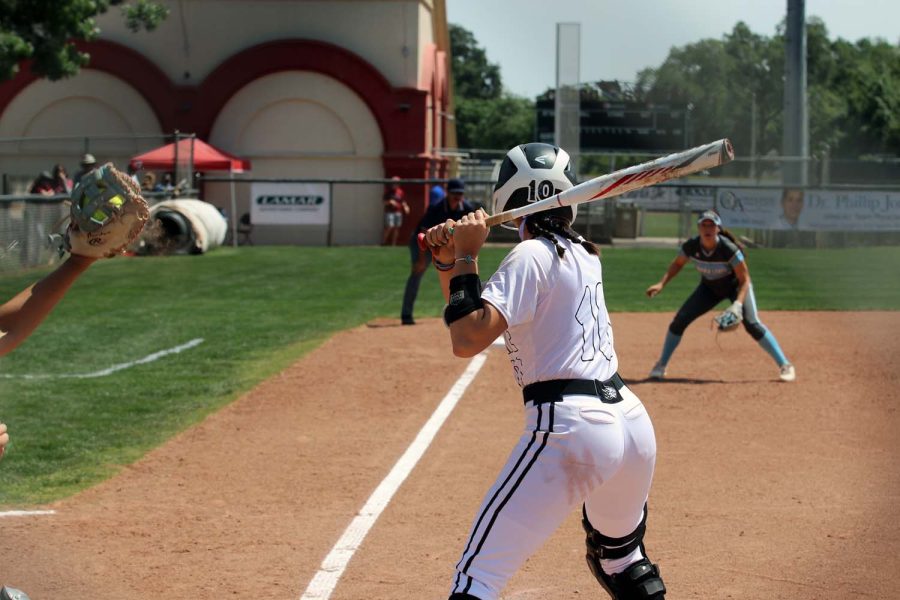 The senior from Galt said her favorite thing about her time in Chico has been the family-orientated environment the program has shown.

“From day one, everyone has been very welcoming and each class has continued that tradition,” Atkins said.

She said her favorite memory was back in 2019, when they went to the Division 2 NCAA Regionals.

“It was fun traveling together as a team,” Atkins said. “That trip made our group a lot closer.” 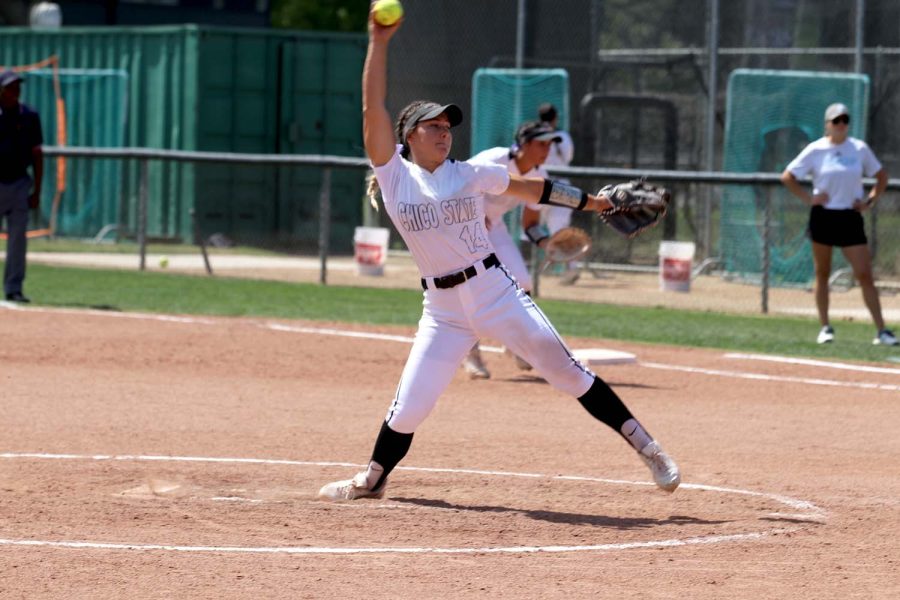 “These are the most special friendships you will make and it makes your softball experience that much more memorable,” she said.

As her time here is coming to an end, Larsen said she is proud of how far she has come and the accomplishments she has been able to achieve.

“I proved to myself that I’m able to exceed the abilities that I thought I had before, and it’s given me a new confidence moving forward in my post softball career,” Larsen said. 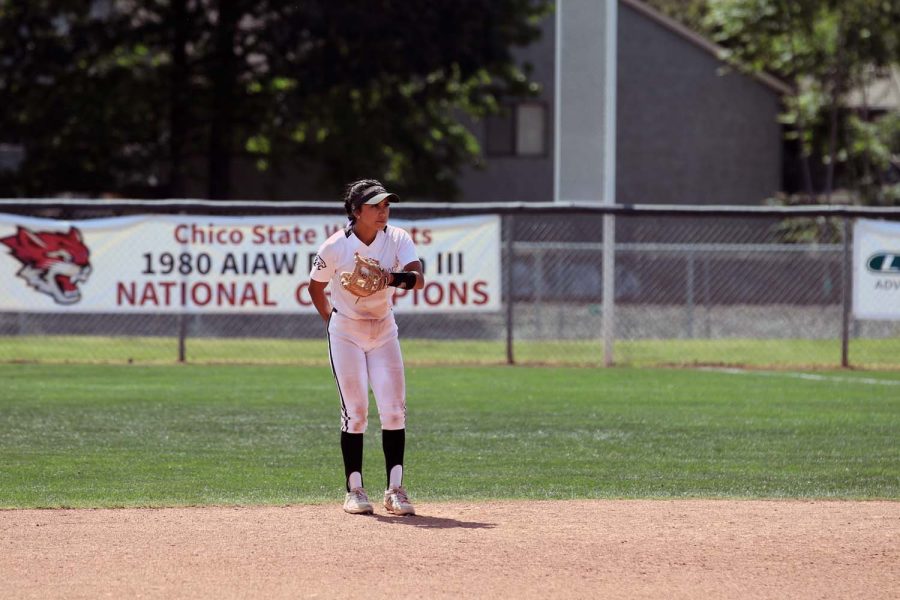 The senior from Oxnard said she would tell her young self to really enjoy the moment, as not everyone gets the opportunity to play collegiate softball.

“If I could tell my freshman self one thing it would be to have fun and live in the moment because you only go to college once and not everyone gets to experience playing at the collegiate level,” Lopez said.

She said stepping into a leadership role this year came naturally to her.

“I wanted to be someone that the girls could look up to and guide them in the right direction,” Lopez said. “I wanted to make sure they were able to have the same experience I had as a freshman.” 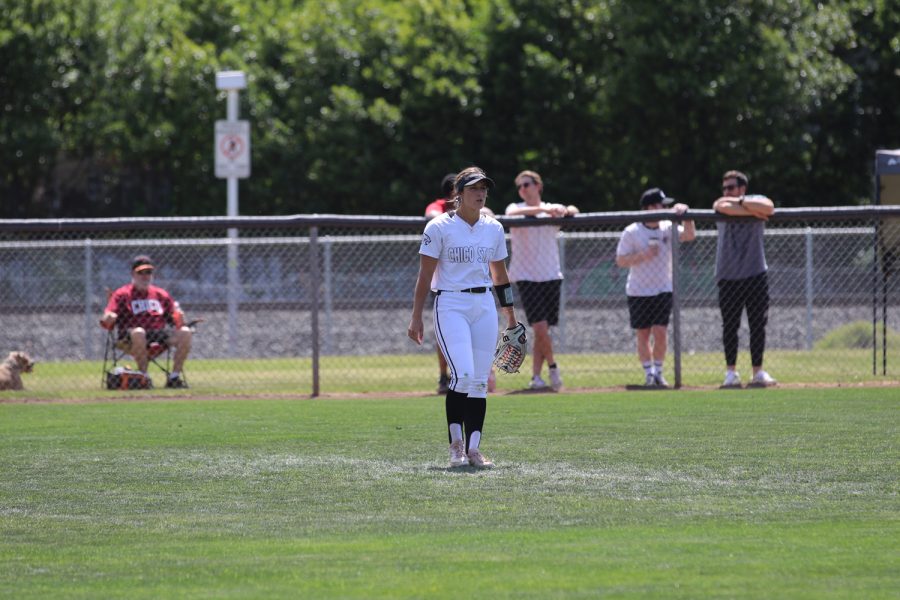 Wildcat outfielder Amanda Metzger watching over the field against the Seawolves. Photo Taken by Javier Hernandez.

The Roseville native said being part of such a successful program was such a fun experience.

“It was great, knowing that everyone on campus knew how successful our program is,” Metzger said. “There was pressure with that, but being able to contribute to the team’s success was amazing.”

Metzger said she’s locked in for the playoffs, but the team has to remember what brought them so far.

“We just have to focus and not let the moment get to us,” she said. “We have to continue to work hard and bring the energy that we have throughout the season.” 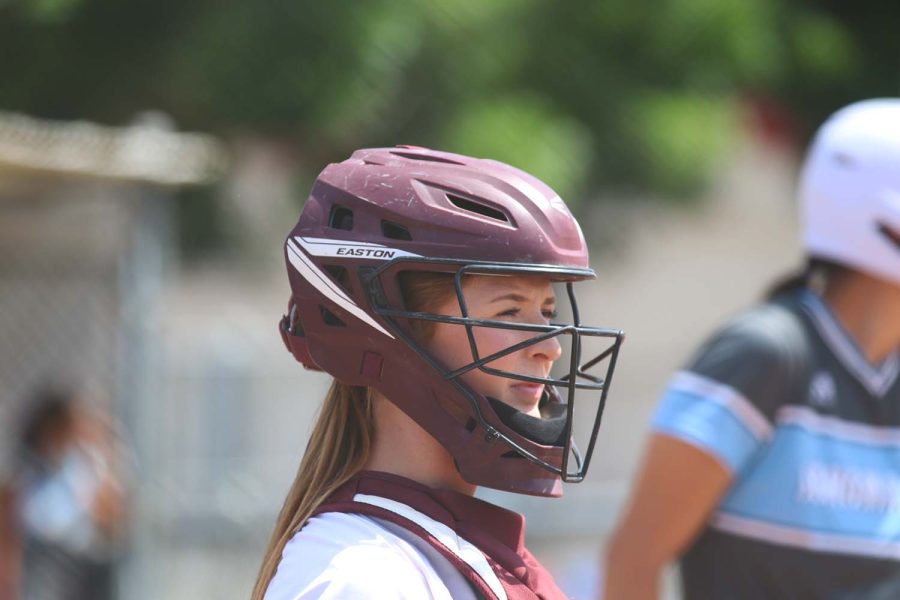 The Simi Valley native said the biggest thing she will miss will be being around her teammates.

“I will miss hanging out with my teammates the most,” Mitrano said. “We really are a big family and they all have made me feel at home.”

She said the emotions of it being her last home series haven’t set in as her team is setting themselves up for a potential deep postseason run.

“During this final week, the emotions did hit a little,” Mitrano said. “The emotions never sat all the way, as we have unfinished business to take care of.” 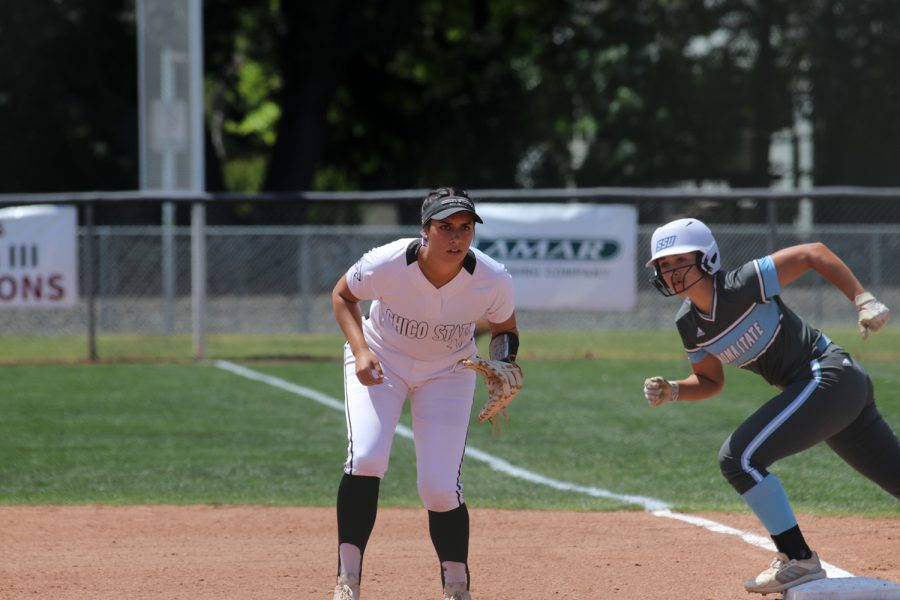 Wildcat infielder Reilani Peleti at first base against the Seawolves. Photo Taken by Javier Hernandez.

The senior from Santa Rosa said she had extra motivation to comeback and finish her time at Chico as COVID stripped her and her team of a potentially deep playoff run back in the 2020 campaign.

“A thing our program has instilled in us is to finish things we start,” Peleti said. “Coming back to play and finishing strong with my teammates is something that motivated me.”

Peleti said she will forever be grateful for Head Coach Angel Shamblin.

“She is an open door, and has helped me all throughout my time at Chico,” Peleti said. “She has helped me through some tough times, it was nice knowing she was always there for me.” 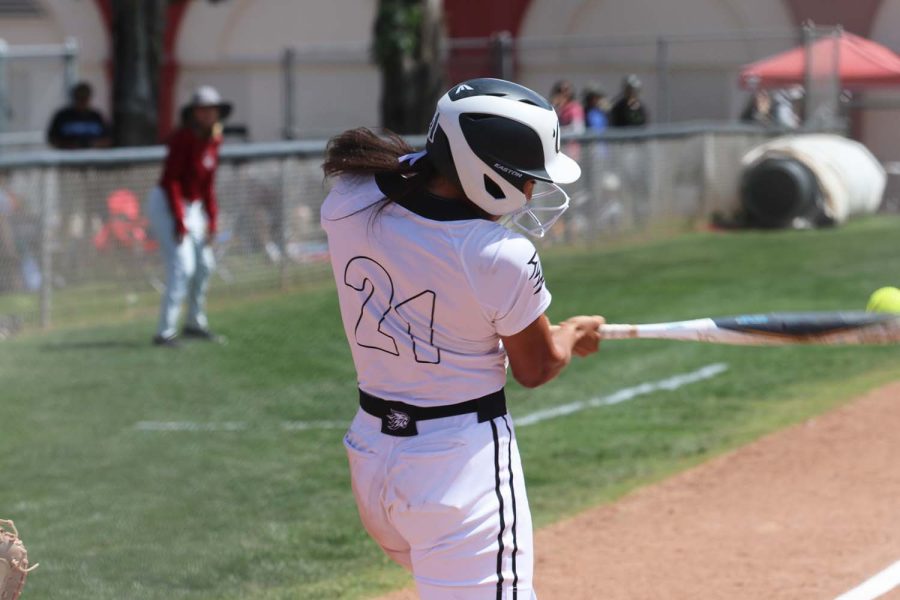 The native from Elk Grove said her teammates and coaches were the people that impacted her the most during her time as a Wildcat.

“We are always pushing above each other to be better regardless, if it’s in the classroom, on the field or in every aspect in life,” Revoir said.

She said Chico State Softball has helped her become the person she is today.

“Chico State Softball is a family and being part of this program has formed me into the woman I am today,” Revoir said.

Coming into the weekend the Wildcats were playing for a California Collegiate Association Athletic title and a playoff berth, while the Seawolves were searching for a playoff berth.

The first game was a battle of two of the CCAA’s best pitchers. It was the Brooke Larsen and Jesse Dupuis show.

Wildcat pitcher Larsen came out, setting the tempo for the rest of the game, as she made easy work of the Seawolf offense, striking two batters out in the top of the first inning.

In the bottom of the first, infielder Grace Stover started the Wildcat’s offense off as she singled with her first at-bat. Shortstop Rachel Bles hit a routine fly out, but the Seawolf defense made an error, allowing Stover to score. The Seawolf defense committed another error that allowed Bles to score the second and final run of the game.

The two errors provided two runs for the Wildcats, which was game-altering as Dupuis kept the Wildcats off the board for the rest of the game. Larsen was the star of the show, striking out 11 batters and allowing zero runs, which led to her 18th win of the season.

The second game of the first double-series was completely different from the first. This game was all about the offense from both teams.

The Seawolf offense started off strong as they scored two runs in the bottom of the first inning. The Wildcat offense had a 2-0 deficit heading to their first at-bat, they overcame that deficit in an explosive matter.

In the bottom of the first inning, infielder Grace Gallagher was up to bat with the bases loaded. Gallagher was hit by a pitch that gave Stover an unearned run. Outfielder Amanda Metzger stepped up to the plate with the bases loaded and singled to center field, to bring in two more runs. Infielder Anastacia Alba had two runners at second and third base and brought them in after a double to left field. The offense was on fire, and didn’t stop. Catcher Lanie Blomquist hit a double that was a fair ball down third base to bring in Abla. Infielder Reilani Peleti was hit by a wild pitch that brought in Blomquist.

The Wildcats scored a scorching seven runs in the first inning. Something that came back to haunt them was when outfielder Nina Revoir went up to bat with the bases loaded, but couldn’t bring in any runners.

In the sixth inning, the Wildcat offense had runners in position to score, but they didn’t capitalize. Heading into the seventh inning, the Seawolves had all the momentum and took their first lead since the first inning, as they went up 7-8.

The Wildcats had a final chance to either tie the game and head to extra innings or win it. Stover was on third base and Seawolf pitcher Nichole Sarra threw a pitch that was too much for the catcher, which allowed Stover to steal home and tie the game up.

During the eighth inning, Seawolf catcher Jordyn Martinez silenced University Softball Field as she homered to give the Seawolves the win 8-9.

Before the start of the third game of the series, the careers of their seven seniors were commemorated in front of the Wildcat faithful, family and friends of the ball players.

Head Coach Angel Shamblin said being able to celebrate this senior class in front of fans means a lot, as things have been up in the air because of COVID.

“These girls really embody what Chico State Softball means,” Shamblin said. “Being able to celebrate them after all the uncertainties made the movement even sweeter.”

Shamblin said something that will forever resonate with her from this group is their work ethic and leadership.

“Their work ethic is something that is really rubbing off on the other girls and makes me proud,” Shamblin said. “They all are leaders and we have been able to lean on them during the season.”

The third game of the series was much like the first. Larsen and Dupuis duked it out in a low-scoring affair.

In the bottom of the second inning, Gallagher doubled to left field to kick start the Wildcat offense. Larsen singled to advance Gallagher to third base. Metzger came up to bat and brought in Gallagher for the first score of the game.

Things were quiet until the seventh and final inning of the game. During the top of the inning, Seawolf infield Sklar Linnane homered to even the score. The Wildcats were in a similar position from their second game. This time it was win or head to extra innings. Stover was at third base, as Pelati came up to bat. Pelati swung and hit the ball perfectly into the gap, where the Seawolf right field couldn’t do anything about it.

Stover scored to give the Wildcats the win 2-1. Pelati was the hero as she hit a single walk-off in the bottom of the seventh.

Larsen pitched six innings and struck out eight batters. Pitcher Mari Takeda Bajan was credited with her ninth win of the season, as she came in the seventh inning to relieve Larsen.

Considering how the first three games went, the fourth and final game of the series was setting up to be a classic.

Things were quiet for the first three innings as Takeda Bajan and Seawolf pitcher Bailee Reed were taking care of each others’ offense with ease.

The Seawolf offense scored three runs in the fourth inning to jump out to a 3-0 lead. In the bottom of the fifth, Bles doubled to left field and brought in Mezger to get the Wildcats on the board. In the top of the sixth the Seawolves extended their lead to 4-1.

In the bottom of the seventh, the Wildcats had one final chance to attempt to win out the series. Outfielder Kyra Gooler came in to pinch hit for outfielder Hailey Seva. Gooler took advantage of this opportunity, as she singled to right field to bring in Metzger and Revoir. This hit also advanced outfielder Blaire Willson to third. Stover, who has shown her clutch gene during this series, came up to bat with a runner on third. Stover hit the ball to right field, but the Seawolves caught the ball to finish off the game. The Wildcats lost 3-4 and split the series with the Seawolves, as both won two games a piece.

The Wildcats ended their regular season with a 36-13 record and a second place finish in the CCAA after finishing with a 26-10 record in conference. By finishing in second place, the Wildcats earned a first round bye for the CCAA postseason tournament and their sixth consecutive postseason appearance.

The Wildcats get back into action on May 5 at Cal State Monterey Bay’s Otter Sports Complex at 4 p.m. Their opponent will come from the winner of the Sonoma State Seawolf and East Bay Pioneer clash.

To keep up with Chico State Softball, visit the official Chico State Athletics website.   Javier Hernandez can be reached at [email protected] or @jhm1226 on Twitter