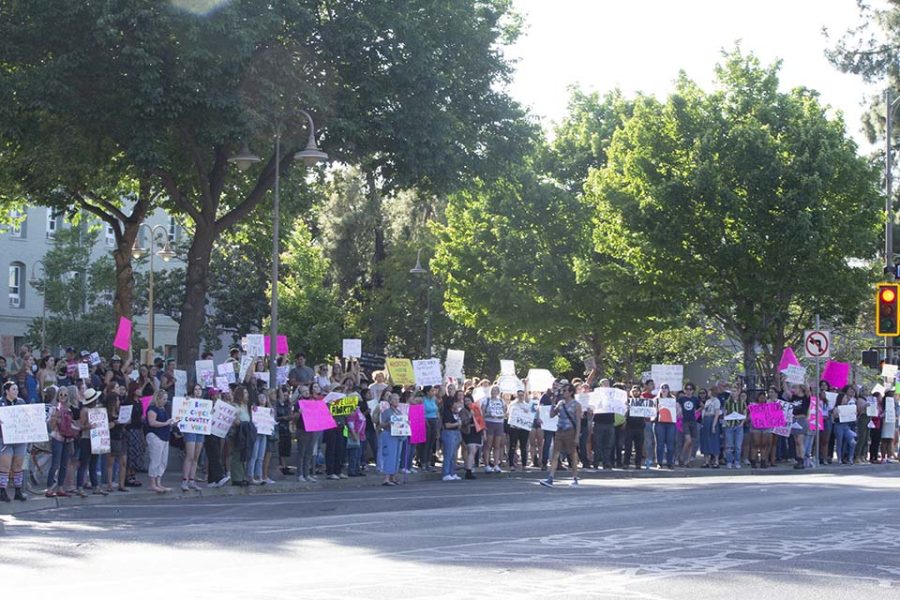 From West 5th Street to West 4th Street for about half a block, people stood shoulder-to-shoulder rallying and chanting non-stop for abortion rights on Monday at 5 p.m. across the street from Chico City Hall.

“Hey Hey Ho Ho, your backward views got to go. My body, my choice. They say no choice, we say pro-choice. What do we want? Choice! When do we want it? Always,” yelled pro-choice protestors as cars bustled down Main Street in Downtown Chico.

Gorre-Clancy said GSEC Adviser, Molly Heck, sent the three of them articles about the leaking of a U.S. Supreme Court draft opinion that would overturn Roe v. Wade, and Women’s March activists from across the nation had an emergency call to action to see which local nonprofit organizations could plan a protest.

“We had to contact the Women’s March and all these people that night, and then in the morning when we all came in — that’s when all the details, making the flyers, posting it everywhere. Stuff like that,” Gorre-Clancy said.

GSEC reached out to Students for Quality Education, Planned Parenthood and the Democratic Socialists of America to garner support and spread news about the protest. 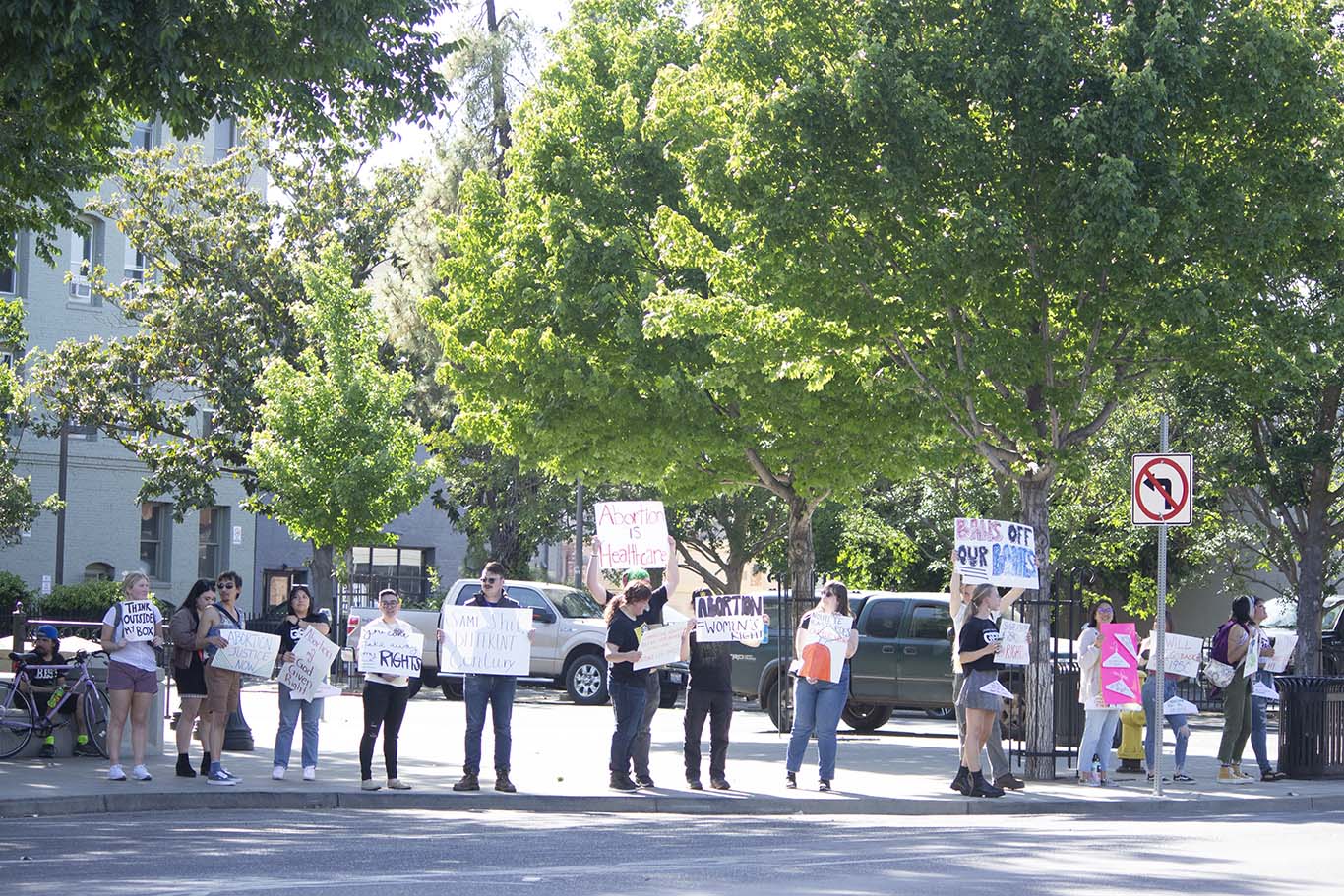 Gender Sexuality & Equality Coalition members protesting before the crowd arrives at Chico City Plaza on May 3, 2022. 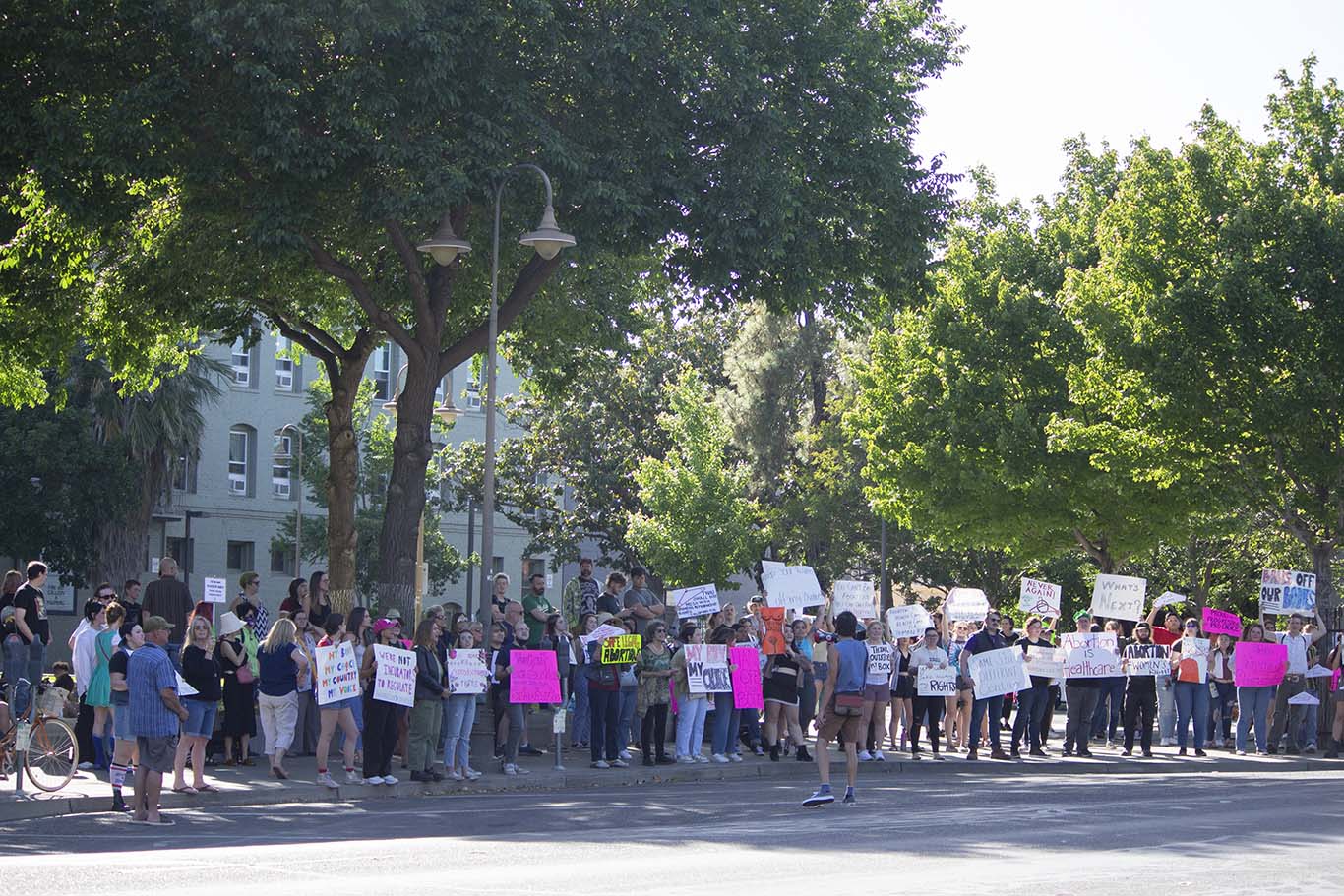 Chicoans and Wildcats protesting across the street from Chico City Hall for abortion rights on May 3, 2022.

About a dozen people showed up early for the event as “WAP” by Cardi B and Megan Thee Stallion blared on a microphone speaker, but numbers quickly grew to roughly 100 within the first 10 minutes and approximately tripled within half an hour. As numbers grew, the protesters started to simultaneously chant as cars and trucks honked their horns driving down Main Street.

“I wasn’t always looking behind me, so when I looked and saw a lot of people it felt good,” Abraham said, “especially because it was a call to action or sometimes known as a flash action, so it was a dream to go with the momentum of the political climate.”

A few people hung out the windows of a sedan with both hands in the air, wooing with the crowd as drivers honked their horns. People started to go wild when a USPS truck drove by and blasted its air horn. However, things got awkward when a firefighter truck drove by with blaring sirens and people didn’t know if they should cheer or not. 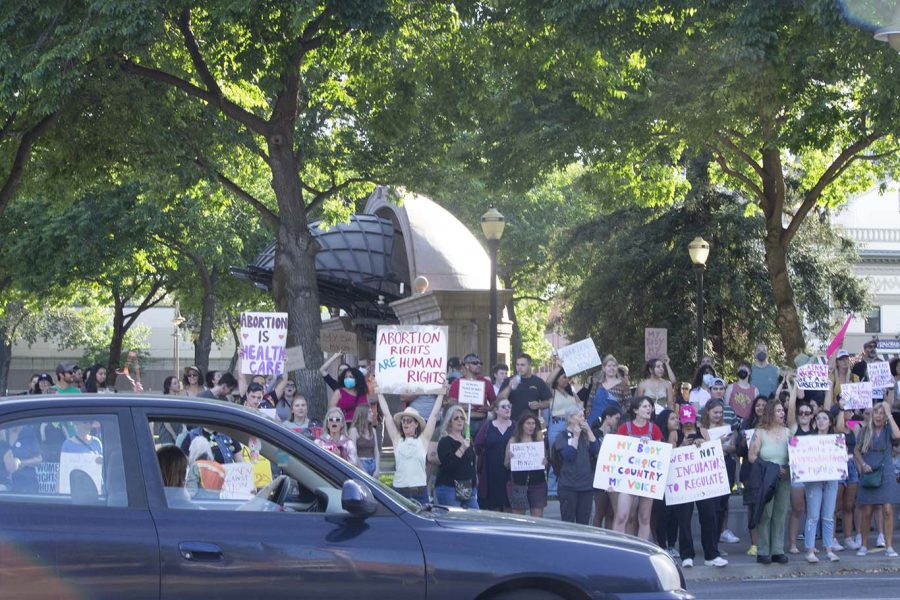 A woman drives past an abortion rights protest on Main Street near Chico City Plaza on May 2, 2022.

Abraham said although they chanted for an hour non-stop, the voice of fellow protesters empowered them to keep chanting loud and proud.

People of all walks of life rallied. Students, concerned citizens, children, elders and more showed up. Some bystanders strolling through City Plaza joined the crowd when they heard: “My body, my choice.”

Abraham said having a responsive crowd provided good energy and empowered others to rally. 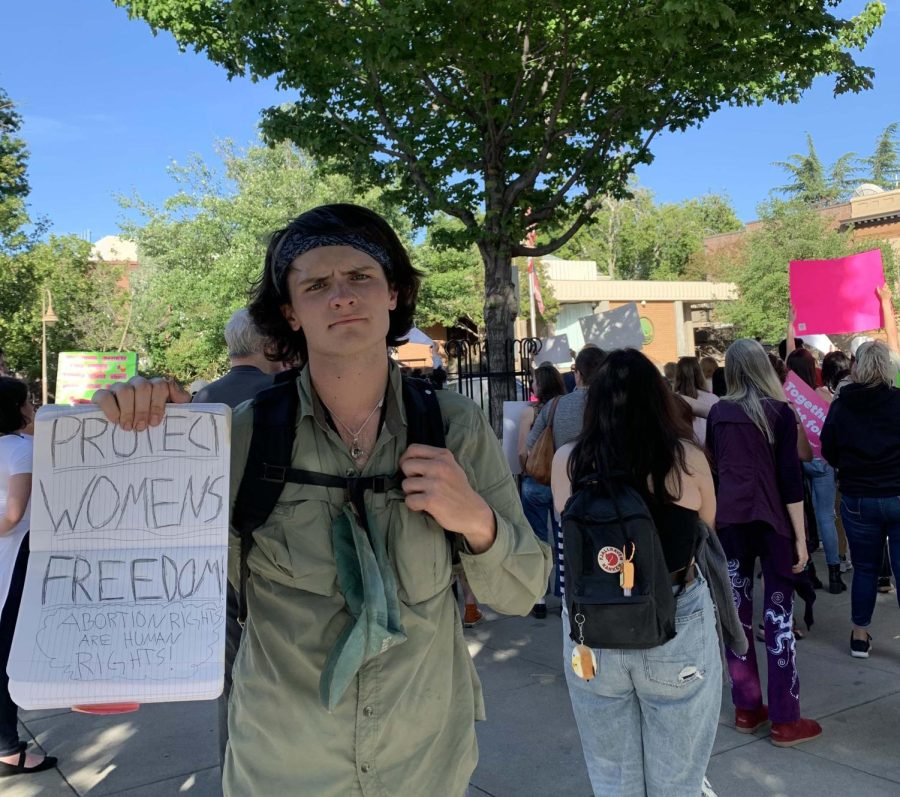 Chico citizen Jared Geiser protesting at an abortion rights protest at Chico City Plaza on May 2, 2022.

People made signs on the spot. Chico citizen Jared Geiser made a sign out of a note-filled school notebook and a lead pencil. He crouched down and made it with what he had on him.

It was a peaceful protest — no police or counter protesters. An old man parked across the street from protesters and started booing before entering Chico Town Hall, but the protesters paid no mind and continued to banter.

Melys Bonifacio, a graduating Wildcat and Students for Quality Education member, said they went to sleep unsettled about the leaked draft news.  They were jolted to action when GSEC reached out.

“I remember the next day, Tuesday morning, I was like getting so many texts from my friends,” Bonifacio said. “Like we got to do something, it’s like we have to speak. When [GSEC] reached out I was like hell yes.”

Bonifacio said it was spiritual how the collective voice of protesters echoed throughout the plaza, to the city council’s chambers.

Near dark, the protesters marched to Chico State’s campus and rallied next to the grass lawn near Bell Memorial Union. The protest was concluded with a recap and some final chants.

Melvin Bui can be reached at [email protected] or @MelvinBuii on Twitter.