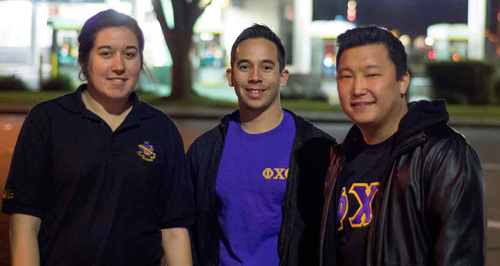 Members of Chico State’s co-ed business and economics fraternity are mapping all the non-functioning street lights of downtown Chico.

Fifty-four streetlights have been photographed, marked and are soon to be reported for repairs recently by the members Phi Chi Theta.

The search grid extended from West 12th Avenue to West 20th Street, The Esplanade to as far back as Craig Hall, said Sierra Delorefice-Chicarino, executive president of Phi Chi Theta.

The goal was to encompass the main areas students travel most frequently, Delorefice-Chicarino said.

The task, which has been underway for the last two weeks, was tackled by dividing the grid into 11 different quadrants and having groups of members assigned to their own specific area.

The non-functioning lights will be reported to either PG&E; or the city of Chico, depending on who owns them.

The project was originally proposed by Sue Maligie, alumni and currently an accounting professor at Chico State. The project was immediately put into action and the search began.

“Our goal is to keep students safe,” Delorefice-Chicarino said. “There are many dark areas in Chico with the available poles and power lines, but no installed lights. Yes, some lights are out, but the biggest issue is the lack of lights.”

Steven Verstelle can be reached at [email protected] or @StevenVerstelle on Twitter.