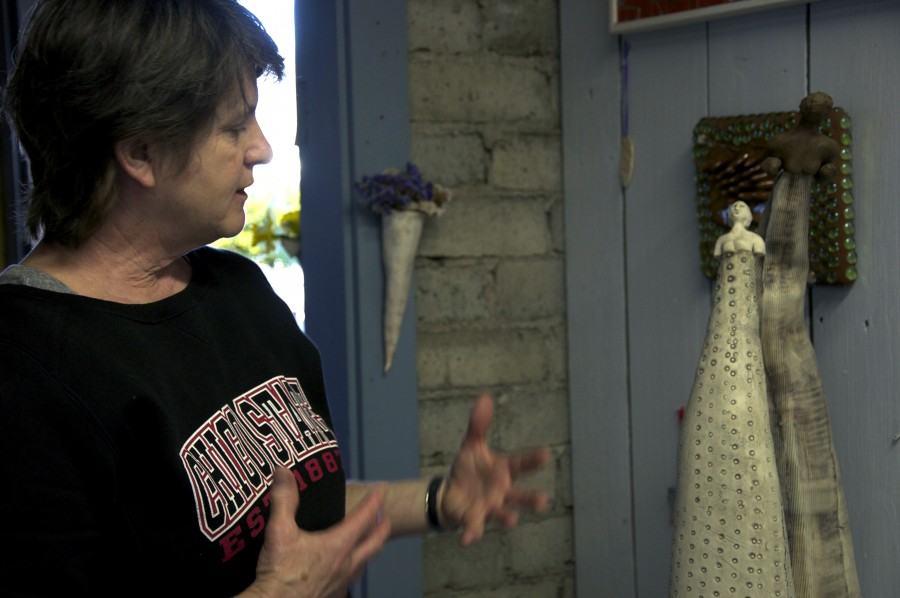 Jana Lawton explains the themes of her work, including women's history, which is displayed at The Art House.Photo credit: Annie Paige

Ashiah Scharaga
Believe it or not, there is more than one garden on Nord Avenue. But this garden, a part of The Art House, is not inhabited by Chico State students.The Art House, which has been at 325 Nord Ave. for 14 years, features artwork, sculptures and furniture by Jana and Dave Lawton. He mainly crafts in direct metal sculpture and she hand-builds with clay. Both have been creating for more than 30 years. One of Dave Lawton’s sculptures sprouts up from the ground — a flower at least 4 feet tall with a molded rebar stem, aluminum petals and a laser-cut yellow metal center piece from Spectra Physics in Oroville. Dave Lawton likes to incorporate pieces he finds at junkyards and other places into his artwork, Jana Lawton said. Findings include old pendants, marble and brass lamps, faucets, sanitary tubing from breweries or dairies and foam packing pieces. “He may incorporate other things, like concrete, but the welding of the metal is usually what gives it its shape and stability,” Jana Lawton said.One of his sculptures is a metal mobile with two rags suspended in concrete, splayed from the edges as if flapping in the wind. Another, a bell made from an old tank welded to a bollard covered in reddish-brown rust, makes a rich, resonant tone when struck.The stepping stones in the garden are made from deli tray covers with intricate patterns, cast in concrete. Jana Lawton’s pieces are inside what used to be a garage. She creates mosaics, sculpture and pottery using a variety of clays. Her favorite piece always changes and is usually the most recent one she created, she said.“It’s really hard to create something you already have in your mind’s eye,” Jana Lawton said. “So you have to kind of silence your inner judge.””Emerging,” created last fall, is currently her favorite. The sculpture started as clay strips shaped with circular, square and diamond textures. It began to tip over while being sculpted. After letting the clay harden, she liked how it looked and finished the piece by sculpting a woman’s face at the top. The woman is confined by the strips, which represent bondage. “To me, it seemed like it was this little person emerging out of the present being opened,” Jana Lawton said. “I understand women’s history and understand that we’ve had a hard road to hoe and still do in a lot of respects.” Jana Lawton likes to incorporate themes related to women’s history in her pieces in addition to using tribal procreation symbols. One of her porcelain sculptures, called “Challenge,” is a woman wearing a black blindfold and gloves. “For women, they have been blindfolded and handicapped but they’ve still got the power, the struggle,” Jana Lawton said. Jana Lawton also creates pottery, including cups and bowls. She also creates colorful pendants out of clay scraps and mini ceramic bowls in vibrant hues of orange, purple and blue with flowers, apple cores and spiral patterns in the center.One of the mini bowls formed a hole in the bottom, so she pinched it upward and created a dent in the bottom of the bowl that looks like an egg yolk. “You don’t have to throw it away just because you have an accident,” Jana Lawton said with a smile. “You can salvage.” Every tile in her mosaic art is either pottery she has broken up or tiles she has made herself, she said. It adds something interesting to the artwork. “For me, if you just use common tiles that are all the same style and height, you’re just doing a paint-by-numbers thing,” she said. Tthe customers that visit the house vary, she said. Some stay for minutes while others stay for hours and enjoy pointing out certain pieces.”It’s hard to sell art,” Jana Lawton said. “So many people have a different idea of what is art. Everybody has a different sensibility and we don’t begrudge anybody.” All of the artwork displayed at The Art House and in the garden is for sale. The business is open from 1-5 p.m. on Sundays and by appointment. Ashiah Scharaga can be reached at [email protected] or @AshiahD on Twitter.
Delete Image
Align Left
Align Center
Align Right
Align Left
Align Center
Delete Heading