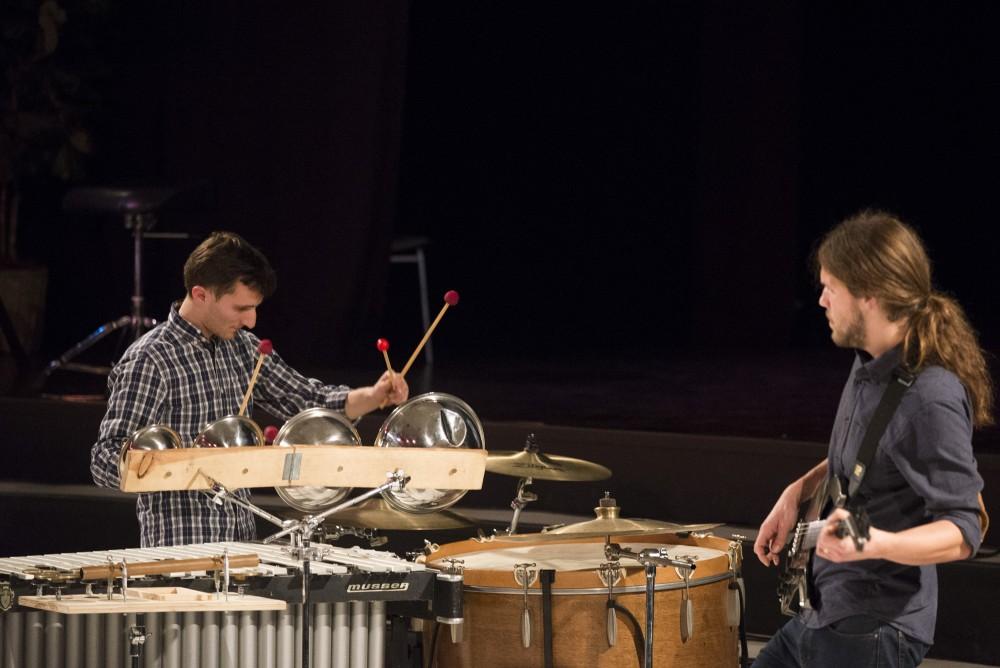 Sarah Scharf
For most people, the term “classical music” brings Bach and Mozart to mind. The second concert of the New Music Symposium featured San Francisco-based classical duo The Living Earth Show at the Rowland-Taylor Recital Hall Friday night.Guitarist Travis Andrews and percussionist Andrew Meyerson brought a new and different take on classical music. Both musicians used a variety of electronic equipment to lend certain sound effects to the performance. Their work can best be described as electro-acoustic contemporary classical. The duo performs compositions written for them by a variety of composers, including Brian Ferneyhough, Chris Cerrone, Timothy Andres and several others. Andrews and Meyerson performed “Renvoi/Shards” by Brian Ferneyhough first.It was a very abstract piece with a choppy, cacophonous sound.This was one of their favorite pieces to play because it sounds like Martians improvising, Meyerson said.“There’s some kind of logic to it; we don’t know what, but it’s there, and it’s a lot of fun to play,” Meyerson said.The second piece told a story of a Persian hero who meets an untimely death, which parallels the turbulent experience of the composer on his return to Iran. This piece was beautiful and also intense, featuring energetic percussion parts.It also incorporated a recording of a man’s voice telling the story and presenting very difficult questions about justice, death and war to the listener. The duo also performed a composition by Chris Cerrone, which conveyed a rainy day in Italy. The piece had a very whimsical and contemplative mood.It featured long, drawn-out guitar notes punctuated with the bright tones of percussion bells. The last piece of the act was a combination of loud, chest-rumbling percussion and melancholy melody on the guitar. It was meant to convey nostalgia and it was a spectacular way to end the show. It was lucky that The Living Earth Show was able to fill in for the clarinet act previously scheduled, because the audience really enjoyed the performance, said David Dvorin, artistic director for the New Music Symposium.Chris Thorne, a first-year music education major, liked the way the music brought him to a contemplative state.”I’m still processing the things I’ve been thinking about,” Thorne said.The performance really showed the power of music to elicit emotion and provoke self-reflection. Aaron Drange, a sophomore recording arts major, appreciated how accessible the music was.“A lot of modern music tends to get very intellectual, and it’s hard to relate to it sometimes, but this did a great job of getting you to think, while still being very accessible,” Drange said. The Living Earth Show provided a spellbinding performance that held the audience’s attention, tugged some heartstrings and stretched some minds.Sarah Scharf can be reached at [email protected] or @theorion_news on Twitter.
Delete Image
Align Left
Align Center
Align Right
Align Left
Align Center
Delete Heading