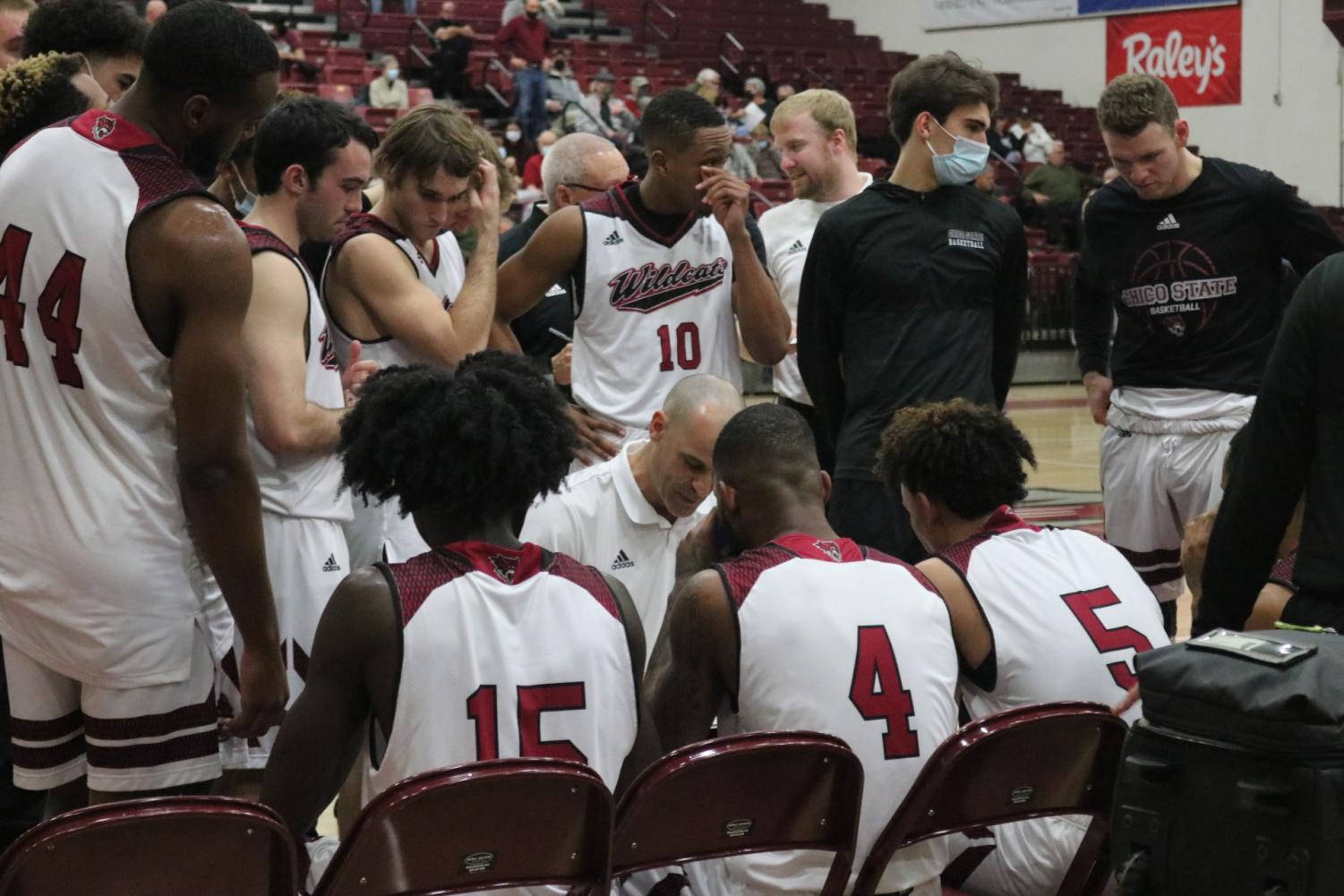 Coach Clink giving out instructions during a timeout. (Javier Hernandez)

Coach Clink giving out instructions during a timeout.

Prancing through a historic season with the Wildcats

Covering sports is something I have done for The Orion for the past two semesters, but covering Chico State Men’s Basketball team has marked my time as an Orion reporter. This team had a historic run, despite all the bumps in the road — like the pandemic and injuries — but that didn’t stop the Wildcats from claiming a West Region Title.

As one season ends, another begins. I was assigned to cover the Chico State Men’s Basketball team as Fall semester 2021 came to an end. The Wildcats were lining up for a great season, but they started off on the road.

The Wildcats played Cal Poly Pomona in the Conference Crossover Challenge. They swept the Azusa Pacific Cougars and the Seattle Pacific Falcons during that first weekend.

I remembered the infamous Justin Briggs poster against the Stanislaus State Warriors during the first round of the CCAA tournament in Acker Gym back on March 3, 2020. Only 624 days later, I was back at Acker as a sports reporter. The Wildcats welcomed their fans back with a win against the Academy of Art Urban Knights, starting their season 3-0.

The Wildcats streak tapped out at 10-0, tying an 80-year record for the best start in Wildcat history.

COVID and safety protocols hit Chico State before their eventual first loss of the season, meaning only verified media members were allowed in Acker Gym. It was a weird feeling, being the only person in the gym as the San Marcos Cougars defeated the Wildcats on Jan. 14.

After their first loss the Wildcats would split their next six games. However, they regained ground on Feb. 5, defeating the then-No. 3 San Bernardino Coyotes. This huge win set the Wildcats up to close out the season in style.

Before heading into the California Collegiate Athletic Association playoffs, the Wildcats honored their five seniors. The careers of Isaiah Brooks, Joshua Curls, Malik Duffy, Colby Orr and Kevin Warren were celebrated on Feb. 26 in Acker Gym just before the regular season finale against the East Bay Pioneers.

For the first time, head coach Greg Clink changed his starting lineup, playing all five seniors. The strategy paid dividends, as the Wildcats dominated the Pioneers and won the final game of regular season play.

That game was wild. I don’t recall a game as energetic. I was walking around Acker, doing my thing, and every ounce of the gym was electric. The fans wanted to send off their seniors on the right note, and they did. As I finished my last interview, the nostalgia hit because this would also be my last guaranteed game at Acker covering basketball.

The Wildcats ended their regular season with a record of 19-3. They were ranked No. 11 heading into the postseason. They owned the best 22-game start in Wildcat history, making them the greatest regular season team — by the numbers — to wear the cardinal and black uniform.

This record would earn the Wildcats a first round bye in the CCAA tournament, which was held in Lumberjack Arena in Arcata. Prior to the tournament, Brooks, Duffy and Warren were named to the All-CCAA first team. Orr and Joshua Hamilton were honorable mentions. Sharpshooting big-man Duffy won CCAA Player of the Year, making him only the third Wildcat to receive that honor.

Due to school conflicts I could not attend the CCAA tournament, so I live-tweeted the game while watching the stream. The Wildcats first opponent were the Cougars. To make it short and sweet, the Wildcats didn’t come to play. They lost 66-80 to the eventual CCAA Tournament Champions, the Cougars on March 4.
The Wildcats ended up as the No. 3 seed heading into the CCAA tournament. Right before the Wildcats first round match up against the Academy of Art Urban Knights Duffy added another award to his collection; he was named the West Region Player of the Year. No other Wildcat in program history has received this award.

The West Region tournament was held at Coussoulis Arena in San Bernardino. The Wildcats defeated the Urban Knights 78-62 on March 11. The next day the Wildcats finished the trilogy and defeated the Coyotes 91-82.

The West Region finals were set: The No. 3 Wildcats and the Cinderella-story, No. 8 Alaska Fairbanks Nanooks on March 14. A ticket to the Elite 8 was on the line, and the Wildcats handled the Nanooks with ease, winning the West with a score of 70-52.

Orr and Brooks were named to the All-West tournament team, and Orr took home the Most Outstanding Player of the tournament. This win gave Chico State Men’s Basketball their third West Region title in Wildcat history.

The Wildcats arrived in Evansville, Indiana, on March 22. They were ranked the No. 6 team for the Elite 8 tournament. Prior to their game Duffy added two final awards to his luscious collection; he earned D2CCA Third Team All-American and First Team NABC All-District.

The Wildcats faced off against the No. 3 Jaguars, who were riding a 17-game win streak.

The game was back and forth, but after a Jaguar bucket to tie the game, the Wildcats had 19 seconds to get a potential game-winning shot to fall. Orr took a deep 3-point shot, which was short, but the rebound found its way to Duffy, who missed a putback that sent the game into overtime.

Overtime belonged to the Jaguars. They defeated the Wildcats 81-69 to move onto the Final Four. The Jaguars would make their way to the National Title game, but came up short against Northwest Missouri. The Wildcats ended their season 22-5.

“It has been such a magical season, they have been the greatest group of men to coach,” Clink said. “The five seniors that are leaving the program, I thank them for everything they have done for our community and program.”

Seniors Isaiah Brooks, Joshua Curls, Malik Duffy, Colby Orr and Kevin Warren exemplify the meaning of being a Wildcat. All five of these seniors lead by example, as they all accounted for countless basketball and academic accomplishments over their tenure as Wildcats.

Brooks, a native from Sacramento is in his sixth and final year in the program.

Brooks, who is tied for longest tenured Wildcat said this program means the world to him.

“After our final loss I was sad, but not devastated because I feel like I will always be part of this program,” he said.

Brooks said his time has come to an end, but he leaves satisfied with what he has accomplished.

“I am going to graduate with two degrees and three minors,” Brooks said. “Being able to win the West Region Championship was the cherry on top.”

Brooks is graduating with two degrees in Philosophy and Psychology in spring of 2022. He plans to pursue a master’s degree in Psychological Science and wants to keep playing basketball professionally.

Curls, who is in his fifth and final year in the program, comes from View Park which is about eight hours south from Chico.

Curls, who is known by his peers and coaches for his unselfishness, said it all stems from his parents.

“The sum of the team is always bigger than the individual,” Curls said. “My family taught me how to always be a team player and it translated smoothly during my time at Chico.”

Curls said he loved the journey at Chico, but his favorite memory was playing against UCLA and sweeping the Coyotes during his senior season.

“I am from Los Angeles so playing in UCLA and being able to have most of my family there was incredible,“ Curls said. “Beating San Bernardino three times this year was amazing because of the history we had with them.”

Curls will graduate this spring with a degree in business administration and plans to attend law school.

Duffy came into the program the same time Brooks did, and is from the same town.

Duffy could’ve been done at Chico, but decided to come back for his final year of eligibility and said it was completely worth it.

Duffy, who knows a little bit about the Chico State Men’s Basketball culture, said his biggest tip for current and future Wildcats is always being on top of your academics and to not have any regrets on the court.

“Communicate with your professors on what’s going on in life and with sports,” Duffy said. “It goes by like a breeze so cherish each moment you have with your teammates and coaches because nothing is guaranteed.”

Duffy is currently pursuing his master’s degree in social science and remains on pace to graduate in Spring 2024.

Orr, a Walnut Creek Native, is a transfer student from Citrus College.

Orr said being a part of this historic team means the world to him.

“It’s really special to be a part of this team, we did a lot of good things and I think we will go down as one of the best teams in program history,” Orr said.

Orr said he loved everything about his time at Chico, but his relationship with Clink is something he will always cherish.

“Playing for coach Clink has helped me become a better person and man,” Orr said. “Everything I learned while playing for him I’ll be able to take into my next journey and I know he will always be here for me and to support me.”

Orr is graduating this spring with a degree in business administration. He plans to either attend graduate school or find a job.

Warren said going to battle with his teammates is the thing he will miss the most.

“I will miss the great moments in Acker Gym going to battle with all of the great teammates I have played with,” Warren said.

Warren was another player who could have moved onto his next chapter, but decided to come back for his last year of eligibility. He said this decision was rewarding.

“It was just crazy coming back and setting goals for myself and my team and then going out and achieving them,” Warren said. “It was just special to be a part of it.”

Warren will complete his master’s degree in communications studies this spring.

Well this is it. My run has come to an end as being a sports reporter on The Orion covering Chico State Men’s Basketball. I had the privilege of witnessing one of the greatest, if not the greatest Wildcat team, ever. From being back at Acker to being the only person in the gym, it was all worth the ride.

To those seniors who are departing: I wish you all the best in your future endeavors. You guys were all great basketball players, but even better humans. This is Javier Hernandez signing off, thank you for the ride and see y’all on the flip side.
Javier Hernandez can be reached at [email protected] or @jhm1226 on Twitter