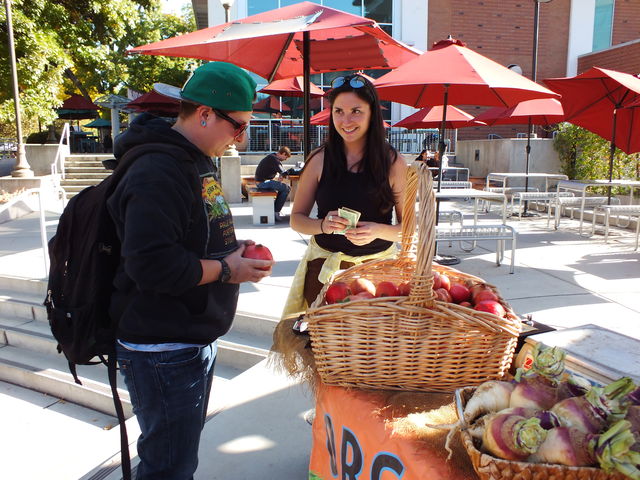 Last year, Chancellor Timothy White released a report on campus services to address student food insecurity, and since then Chico State has been raising awareness and expanding its campus programs.

One such program is the Organic Vegetable Project at the University Farm.

The Organic Vegetable Project began as a one-acre test plot to provide vegetables to university dining halls. Now, 10 years later, the vegetable project has grown to three-acres and sells 10 to 25 percent of what it grows to the university depending on the season.

However, the majority of its produce now goes to members of its Community-Supported Agriculture program, which is targeted at helping students gain access to fresh produce.

“The idea with (Community-Supported Agriculture) is getting more students eating healthfully, helping them address their food insecurity by learning that eating produce can be economical, and so we’re reaching out to them,” said Organic Vegetable Project coordinator and agriculture education graduate student Tina Candelo-Mize. “Hopefully, students are learning more about seasons, what grows in our area and improving their agricultural literacy.” 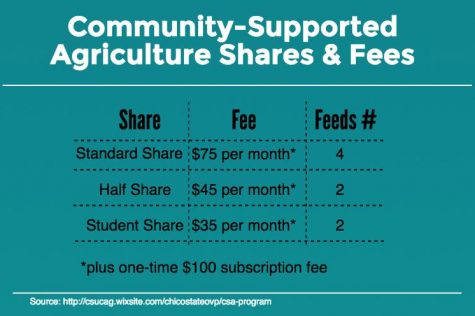 For students who cannot afford the fees, a work-trade option is offered.

“If a student wants to eat some healthy vegetables and they can’t afford it, if they would just come out the farm and help for a couple of hours, we’ll give them a share,” said Jeremy Payne, a marketing and community outreach manager.

The Organic Vegetable Project grows vegetables year-round so members can have produce seasonally.

“Chico experience is a 12-month growing season,” Candelo-Mize said. “So the idea is that we’re planting everything now while it’s warm and then that way come January we have a harvest.”

Depending on the season, students and Community-Supported Agriculture members will receive:

“I’ve seen the Organic Vegetable Project take many different directions,” Candelo-Mize said. “It’s really neat to see it go from ‘why don’t we supply the dining halls with produce’ to ‘let’s start getting some of the students who need food some food.’”

Veggie Bucks is currently funded by grants, and Candelo-Mize is applying for another grant in hopes of expanding the program.

“The goal is to have fresh vegetables and then any fruit we might have in the Wildcat Pantry Monday through Friday,” Candelo-Mize said.

The Organic Vegetable Project is also trying to join CalFresh, formerly known as food stamps, so students can use EBT cards to purchase organic produce.

However, Chico State does not currently accept EBT. Students must venture off-campus to utilize their CalFresh benefits.

“There were some people working to get an (EBT) card reader in the marketplace or the Wildcat store,” Candelo-Mize said. “We’re running into a couple roadblocks because (Organic Vegetable Project) is through the Research Foundation so we don’t have our own bank account, and so we don’t have anywhere to link up a card-reader. And so what we’re trying to do is work through that red tape.”

In the meantime, Payne is starting the Helping a Hungry Wildcat program so that the Organic Vegetable Project can sponsor students who have food insecurity. These students would receive vegetable shares free of charge. Payne is working to make this program available by January 2017.

The Organic Vegetable Project is a fixture of Chico State’s food security efforts, and at a recent food security project meeting, Payne heard about a student’s story that motivated him.

“He came into (the Wildcat Pantry), young and clean. He looked like your normal, everyday kid. He looked like he didn’t have any problems,” Payne said. “He said he had heard that (the Pantry) helps people out with food and (Kathleen Moroney) showed him the Pantry. He asked if he could have something and she gave him a bag and told him he could fill it up. He just broke down in tears and was grateful. He said he hadn’t had anything but top ramen for over a week.”

“That’s the guy I’m working for now,” Payne said. “He’s my motivation everyday when I wake up and put my Organic Vegetable Project hat on.”